Where has Mira been?

And how can she charge her phone?

These girls continue to need therapy.

And I still have no idea why one of them hates the other so much! She's been waaay too mean for it to be something as dumb and simple as "You're better than me so I hate you" when the nicer twin is so openly friendly all the time, being so mean over just that would go beyond just pettiness.

Teenagers are nothing if not illogical emotional messes.

But to explain it's not just that Tsubaki is often seen as the more capable and better twin when compared to HIiragi, it's that Tsubaki doesn't see herself as worth anything and that feedbacks as unintentionally insulting to Hiiragi. To paraphrase Hiiragi it's "If you're useless what does that make me?"

Is it dumb and doesn't make sense? Absolutely. Does that describe teenagers? Abso-fucking-lutely.

Take what time you need.

lt.tibbles
The Girl Through the Viewfinder discussion 29 Mar 21:06
Quote

will you also deny that strawberry panic ripped everything from marimite? the difference between yagakimi and strawberry panic is that yagakimi isn't a soap opera and is actually good (seriously, i tried to rewatch it a while back and couldn't get through even half of it).

Strawberry Panic was pretty much a methodical parody of Marimite, not a ripoff of it.

I still don't see much evidence for the overall thesis you're putting forth. The play in Yagakimi had a very specific function in the plot and in the dynamic of the characters. The movie here just seems to be the occasion for getting this group of characters together (and I can think of a half dozen other manga that have had some kind of play/movie/performance as the instrument for allowing the various characters to interact).

Honestly? Hajime's desire to make a movie reminds me more of Kumiko's growing antipathy towards music at the start of Euphonium and her eventual realization that, yes, she does in fact still love music and the euphonium. Yagakimi's play was never about the play but about Touko realizing that yes she deserves a life outside of pretending to be her sister. That she can have her own dreams and desires.

Honestly you could make a better argument for similarities between this manga and Revue Starlight.

lt.tibbles
The Girl Through the Viewfinder discussion 26 Mar 22:55
Quote

new tropes have definitely been codified.

Honestly I don't think this is true at all. Bloom Into You is a well written and deep series but it doesn't do anything thematically that other series haven't done in the past. What it does is tie a lot of those preexisting themes together and does them well in the span of a single narrative. This is not a bad thing, stories do not need to be unique to be good and/or enjoyable. Indeed, they don't even need to be well executed either.

Why are we still here...

Aight, how much of a dumpster fire are we expecting?

lt.tibbles
The Gradual Changes In The Room Of a Lousy Neet Who Fell In Love For The First Time discussion 10 Sep 03:05
Quote

The artist forgot to update the time on the clock!

That's probably because it's broken and they haven't noticed.

My god, what a fucking twisty twist.

Chapter/Volume 1 has been here as a standalone work for ages, it's only now that the rest of it is being uploaded.

Years later and I still love these two dorks.

lt.tibbles
A Love Letter for the Marching Puppy discussion 20 May 16:17
Quote

Huh, for some reason the chapters are linking out of order. 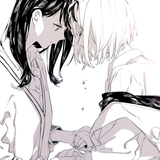 It's a good show, highly recommended.

Ah, looks like they've uploaded most of the chapters, though chapter 52 seems to be missing currently.

It is however on Mangadex so it's not too much of a problem.

lt.tibbles
A Girl Whose Breasts are a Little Big and is Kinda Pretty discussion 25 Apr 01:46
Quote

lt.tibbles
She Gets Girls Every Day. discussion 05 Apr 13:27
Quote

... Aight can someone fix the locations of the volume extras? They're currently all shoved under volume 5.

I really hope this moves towards accepting the flaws and differences in ourselves and other people while rejecting the pedestals we build for them... Ito has her own messed up headspace but it doesn't excuse her own shitty behavior.

I think the story realizes this, from my understanding of things Ito internally realizes that she's doing the same thing Mina did to her, stringing along a girl who values her opinion over their own needs but because of her own personal trauma she's finding it hard to listen that voice in the back of her head that's telling her "You're being real fucking shitty right now, come on." It doesn't excuse what she's doing but hopefully the story fully moves in that direction.

Some of us waited a near decade for someone to finish translating Comprehensive Tovarisch. It was worth it.