elevown
Throw Away the Suit Together discussion 06 Dec 09:26
Quote

That was very sweet- i hope it stays that way. Im glad they told the aunt the truth. @Zexalfan That is super obviously an unimpressed/miffed expression :)
She might well be disappointed too - but that is not what that face shows lol.

Never thought I'd see the day :) Thanks to whoever uploaded this! It was great to read the last few chapters at last.
This series made Kansen one of my fav characters.

Wow its great to see these up here- this and hermit in 1 day! :) 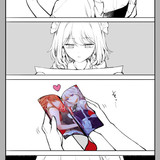 I'm sure she'd oblige you if you asked Sakuya! 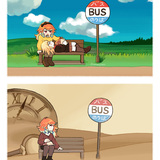 Dunno the characters at all but that is pretty impactful.

^ That would work too as long as OL-chan got a gf too- maybe her co-worker who looks like koharu but older?

p.s Does it count as loli if its two young girls hooking up? Its nearly always age gap so you rarely see it.

@ johnb I kinda know what you mean but she doesn't seem the sort to physically attack her or anything, she freaks out too much at the slightest thing and her thoughts have not been about doing anything sexual.

She seems the sort who wants to become her girlfriend, yes, but would then happily wait till she is 18 and just have cute dates till then.

I was confused there for a second as to why Koharu was at her work.. Seriously, her co-worker looks exactly the same..
She met Koharu in her work building right? At the lifts, both going to and leaving work. Why was Koharu in that building? Is it possible the co-worker is her mom? Probably not and just lazy design work for a minor character.

elevown
There's a Song I Want You to Hear discussion 29 Nov 11:31
Quote

@MeiLangSakalam No? Nothing indicates that. She just left.

elevown
There's a Song I Want You to Hear discussion 28 Nov 22:06
Quote

I dont really get what happened besides she left.

But What does the 2nd bubble on page 9 mean? Did Moka dislike this mesh?

What is a mesh? the context would suggest she should be asking if she disliked her current style/cut.

I'm guessing Hino was actually shielding Koguma's back from anyone else's view rather than just oggling :)

@erana ? Then it's not a comedy! What are you talking about ? it's obviously not a gag manga. It has comedy elements sure but it can use them as slow as it wants- why are you judging it as though its meant to be some 4 koma gag manga?
It's pretty clear comedy is NOT gona be its major focus.

@red_alert_one Sorry that was it. The whole thing.

elevown
Throw Away the Suit Together discussion 23 Nov 13:30
Quote

@Blastaar lol. You gotta admit though, a story going all angsty with a love triangle or toxic etc is far more common in yuri than death by tsunami.

I hate stories that don't have a happy end, so I too have a niggling worry on a new manga if its not clear from the tone how it might go. I dont mind neutral ends too where its not clear or whatever but i really dont want something depressing!
And this story, given all the angst in ch1, its clearly serious enough in tone to go down a bad end route if it wanted- even though i have not seen any evidence of it either.

@rkkn Yeah- but that sounds silly imo- and clearly not what they are saying- they are drawing it out- thats what we do- we DONT add sounds to the word ends.

ALL words that are shouted or drawn out and lengthened in this manner - we understand how to say it- like RUUUUUUNN! The word has actually become much longer in pronunciation- typically on a middle vowel sound.
Same goes for type. The most logical way to lengthen it would be how it would be pronounced which would be tyyyype.

But I agree maybe it doesn't read as easily as typeeee.

elevown
Throw Away the Suit Together discussion 22 Nov 15:06
Quote

I hope they build a happy successful life here- i don't want it to fall apart and the message seem to be 'you can't escape the rat race'.

I'd expect trying this to have its own challenges ofcourse- but taking your own none standard route through life is totally an option I'm hoping the story validates.

^^Surely it just means the authors should extend the word through the none silent letters? Tyyyyppppee? Since thats the only way we can draw it out when reading it anyway.

I liked this story, shame it was so short- I thought it was just about to start lol!

I wish stories that are just gonna be 2-3 parts named them like Part A, Part B , or first part, middle part, last part etc. Some do- at least that way you know there is only gonna be 2 or 3 parts and its not some long series.

This had details and panels that seem strange in such a short story.. I think there's a chance it was wrote as the first test chapter for a series but there was no interest so it just became this.

elevown
Throw Away the Suit Together discussion 22 Nov 10:20
Quote

Since her phone was with her bike and that local houses number was presumably a contact on her phone, the call is gonna be the woman who took the bike right? Meaning she wasn't stealing it.

That said I still dont think its a good idea to assume a bike has been abandoned and wheel it off lol.

@Ramunes If you're reffering to the ringing phone, its just coming from inside the unlit house not the basement. And is gonna be the lady who took the bike imo.

If I'm right I just hope she isnt gonna be a love rival- i detest triangles.

elevown
Throw Away the Suit Together discussion 22 Nov 09:49
Quote

Is the last page a jojo reference ?
And why the aaaangst tag ? They are already a couple.

Angst doesn't have to just be about getting together. A couple can experience plenty of angst- we already saw it at the start- all that worrying about a job is angst. Even if a couple love each other they can face difficulty and even be torn appart if they are experiencing lots of stress from other sources.

elevown
Sorry but I'm Not Into Yuri discussion 21 Nov 07:13
Quote

I really ship her and the pres so this chapter was amazing :)

I hope they get together officially in the end, even if there's a bit more fooling with other girls, because her denials aside, she really seems to be into her and has for ages.

^^ I think the falling population is also down to their obsessive work culture too, making it the all important be all end all of adult life where lots of them get no time for socialising or properly raising family. From like highschool on they are obsessed with getting the perfect grades for the school they need for the uni they need for the jobs they need.. then in a new job after graduation they gotta work like mad to make a good impression as a newbie and get promoted etc- when are they meant to meet and fall in love? Its no wonder these work arranged mixers seem to be all they have time for.

p.s I dont really know the details either this is just the impression I get from what i've heard- and im sure it doesn't go for everyone.

Whats wrong with you going to a mixer and fetching a girl home lol?