I hope this one gets continued...! I had a sudden craving for Takemoto and there's sadly less than I remembered available.

This was cute. The food tag almost always delrivers!

KCM
The Skirt Sings at the Landing discussion 27 Jul 15:55
Quote

Oh i definitely don't mean that she's done nothing wrong. She totally has, girl fucked up. I'm just saying that she's not evil and that she's never done anything with the intention to purposefully hurt or punish Kiki, as some seem to think.
She's not a villain who needs to be "redeemed", she's a friend who needs to apologize and learn how to communicate instead of bottling up and think/talk before acting, is all~

I didn't say she's evil? She just doesn't really care about Kiki, she just wants an unreasonable measure of both control and aloofness over her. It is maipulative of her to abandon Kiki rather than just explain that their dance goals don't line up or whatever. Shion seems to get a lot of her own bad choices from her own controlling parents, and she is trying to both exert control over Kiki as well as abandon her in some kind of weird reflection of that. I would feel more sympathy for Shion if she stopped getting involved behind the scenes and sticking her nose in when she feels like it.

You can't just treat your friend like crap, then keep following her around and pining after her when you're the one who abandoned her first. And you definitely have no room to be jealous of someone like Michiru coming along and befriending Kiki. Shion needs to wake up and grow up, stop trying to have her cake (Kiki being alone by herself and discouraging her to follow her own dreams) and eat it too (Being able to go back to being friends with Kiki).

KCM
The Skirt Sings at the Landing discussion 27 Jul 09:58
Quote

Yeah I don’t get it- she likes her? So she wants to distance herself cause she assumes it’ll never happen? But still wants to be in her life? I mean it makes sense kinda. I thought the other girl would say “that’s really really stupid”

I think she did all this to punish Kiki for giving up being Shion's dance partner, the lead namely. I think she's trying to let Kiki fail on her own so she can swoop in with the I told you so's after the fact. I sincerely wish she had called her out on how dumb it is.

KCM
The Skirt Sings at the Landing discussion 27 Jul 09:31
Quote

Man I cant stand Shion... She just wont leave Kiki alone, even tho she's the one who broke it off in the first place. Put your fakeass feelings in the trash where you put Kiki and leave her alone, you manipulator. You dont get to act like you did all yhis bc you cared TOO much about her.

This is some good stuff thank you

I'm not crying, you are

Aoto's mom should look inwards if she's so convinced something is wrong.

Dang it mom. Ya tipped the balance.

You wouls think using the inugami to gently and non-permananently harm the bullies to keep them away would make sense, but she wants that catgirl's attention dammit.

oh no this suspense is taking years off of my life

KCM
The Skirt Sings at the Landing discussion 10 Jun 09:42
Quote

This series is muy bueno; relationship drama that is both compelling and not enraging (unlike real life).

Man the gyarus are so wholesome. I don't look forward to seeing Watanabe descending into her depressive identity crisis! She seemed cute and well-adjusted in MS.

The translation was much clearer this time around!

It's the only even remotely unusual one I could readily spot. Yet for some reason peeps be talking like this was original 16th-century Shakespeare or some shit.

It's not so much that any of the words used are too obscure to know the meaning of (except maybe "aggrandizing", or "abscond" for people who haven't been exposed to a certain webcomic). It's that in context, it really reads like someone started with a more reasonable translation and then started looking up synonyms in a thesaurus and swapping in words that don't mean quite the same thing or aren't used in that way.

I think it's the sudden shift to this sort of flowery language when up til now the language was fairly straightforward. We wouldn't notice if it had always been like this.

Now I'm curious as to what was the story with this chapter.

Most belated April fool's everyone. What kind of elucidation must I covet for this highfalutin construction?

Edit: honestly wondering why the sudden change in their speech? It would be understandable for the classy ojou-samas to talk that way and/or if their speech has always been like that to begin with, but it's honestly bothersome to connect them with the characters now. Sorry for the rant, this chapter made them all sound pretentious in my head.

Yeah, it would have made perfect sense if this was always how the souers and senpais talked, but starting it this far in and making even Watanabe, Yoshioka and Sana talk like tht as well just are needlessly confusing.

Honestly tho before this I was sure the twist was that Watanabe WASN'T interested in other girls for real life. I'm glad I was wrong

OH MY GOD??? This was a good-ass chapter. We got steam now, folks.

^^ Sana is really fun and seems to be the only self-aware character among the side ones, enough to notice Ririka and Fuyu’s gay bs and criticise the weird sister system.

And this right here was a move. 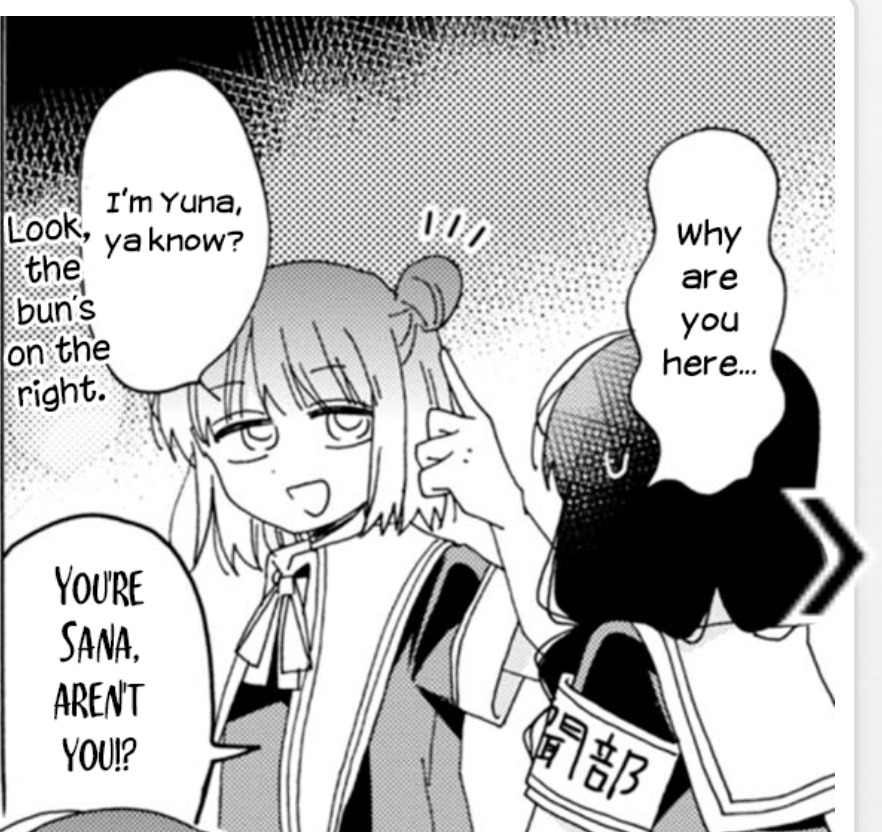 Okay here's my guess: Watanabe has an ex-crush or ex-girlfriend from middle school that she fell out with (thats who was texting her) and so she immersed herself in the world of yuri as a way of escaping and deflecting from her own sexuality, vowing to "never have a 3d love again" and so she's gonna try to distance herself from Yoshioka out of fear of loss again.

This would make everything make so much more sense, so it'll most likely be something else.

What will Watanabe do next? Deny her feelings, probably. We're in for another round of denial, folks.

I really don't care about any of the other couples... I want to, but Yoshioka and Watanabe are the only interesting ones.

I feel like I figured out why this feels like it should be more of a comedy/parody-- it's the art style. It's bouncy and round and everyone has a bit of the sameface that would be a lot more easily solved if everyone besides Yoshioka and Watanabe had a more distinctive personality.

Looking forward to the next installation where Watanabe (probably) has a crisis of desire! Thanks for all your hard work.

The school might be a yuri fest but honestly, Yoshioka's just a lesbian

... i don't get the difference at all
lesbians, pls explain

The side characters are just souers and they're happy to be, but Yoshioka wants a real girlfriend.

Actually, that's kind of a more rewarding way to look at the story: Yoshioka is the only real lesbian slowly awakening within the restrictive walls of an S-Class scenario. And Watanabe is also there!

The series feels like it's playing too many of the tropes straight to be a good parody. A good parody requires both a love or the source and a willingness to poke fun at the source material.

While I can tell the author is writhing this from a place of love, at times certain tropes feel almost sacred and beyond criticism.Some tropes are played straight for the sake of playing them straight, without adding anything to the original trope. Many common tropes are merely lampshaded, no letting reality ensue or looking at what a trope like this would actually imply.

That said, a whole lot of this manga reads like its trying to be a parody, only just missing the mark. Watanabe kinda rockets past being a relatable otaku and ends up being just a terrible person. It's a fun comparison to the popular "villainous" MC's, as the girl actually is as manipulative and selfish as they often are supposed to be. Yoshioka basically steals the show as the eventual protagonist, as readers kinds stop caring about Watanabe's current obsession and instead are rooting for Yoshioka to ruin the plans just enough to make progress with her crush.

If I had to pick a singular problem, it's that the whole setting feels too close to Watanabe's perfect, vanilla yuri paradise, even when we aren't seeing things from her perspective.

Bingo bango, you nailed it. I like this series quite a lot, it just doesn't go as hard in either a dramatic or comedic direction for a lot of folks, myself also included. I just can see so much potential going unused.

"The mysteriously long path from the main gate to the school building" sounds like a parody to me. So there is some lampshading here and there

True, but there are SO MANY other opportunities that have come and gone to take the piss out of the characters, tropes, and setting esp with nerd-ass Watanabe as the protag. I'm not saying it SHOULD be a gag parody manga, I'm just surprised it never has become one I suppose. Or even just added more depth to everything beyond the surface level 'fancy all girls school' setup. Not bad, just interesting.