Rekan1
My Best Friend Who I Love Fell Completely in Love With My Vtuber Self discussion 16 May 18:43
Quote

Yooo that was way too smooth

Rekan1
Take Responsibility For My Stomach! discussion 16 May 10:12
Quote

Guys I think they really are just roommates.. 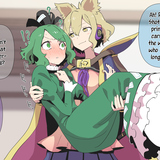 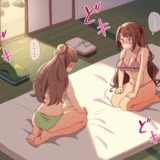 Rekan1
The Story of a Villainess Seducing the Heroine discussion 16 May 05:30
Quote

I actually took it as her thinking if there are any guys that would fit that would make Elsa happy if she wasn’t with Yvonne. Plays into trying to help Elsa find someone that will make her happy before Yvonne falls too deep and gets burned when a “true love interest” shows up.

Can anybody tell me what SSR means in this context? I guess she's not calling her cousin/brother a Soviet Socialist Republic

I guess a super good guy?

Can anybody tell me what SSR means in this context? I guess she's not calling her cousin/brother a Soviet Socialist Republic

I guess a super good guy?

Ngl when I first heard about the cousin my first thought was that he was gonna be a love rival of Elsa because I for some reason thought he was in love with Evie despite them being cousins.. Because I never really take incest into account when I think of these things..

I love this so much.

And big hype for ally cousin.

My guess:
He is gonna be wingman, elsa gonna open up to him, evie is gonna misinterpret it, be sad.

Yvonne: Yo cousin I need you to swoon this very important girl friend for me because reasons.

Also Yvonne: No way they're actually getting friendly with each other.. Why do I feel so sad seeing my very important girl friend finally get a love interest..

Rekan1
Beauty And The Beast discussion 13 May 04:02
Quote

someone make shizuku finish the fanfic! I need it!

ahhh wishing to have hung out more after graduation.. How relatable..
But hey would you look at that, looks like she didn't forget her at least!

Not to mention she is firmly in the thought that she is in a STRAIGHT otome game that doesn't have a yuri route.

The thing that throws me off about this is, she keeps thinking "game this game that". But does the villainess system even have anything to do with the game at this point? I thought the "point" of the system was to make the MC into a damsel in distress, triggering events where she's saved, but... no knight in shining armour came to save her before her wrist was injured

Also that does make me question, what do the points from the system do? Evie has probably never chosen a point adding option, or at least when she's not being forced to, so maybe there's a system shop or something from Chinese manhuas with the same system trope but eh I don't read any of them. 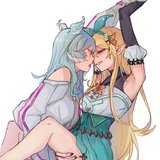 I might be twisted, but I love the fantasy of being cut by my girlfriend, only to be held lovingly afterwards. Reading about a relationship where they overcome the friction generated by Yvonne hurting Evie would be much better than about the god system stopping them from ever Doing Yuri, in my humble and depraved opinion.

All of that being said, I do still enjoy this well enough, even though I don't really like how the system is being used.

Remember how they ended up leaving the original Academy: Yvonne refused to potentially murder Elsa. That’s not something you can be held lovingly after… or at least, you won’t be alive to experience it.

Yeah even if Elsa is into Evie hurting her, I'm pretty sure getting pushed from the top of a five story building is not one of her kinks

Also I for some reason find this one panel of Elsa really hot..

I kind-of wish Elsa would confront her over her, apparently, erratic behavior, but a good part of that is also wanting her to find out about the villainess system and, maybe, trying to help Evie work around it. It would also make her position a lot more understandable: I love you and I'm not going to start hating or fearing you because that awful system sometimes makes you hurt me.

Yeah Elsa has to be really blunt, I can see this arc escalating to something like Evie wanting to run and distance herself even more from Elsa in fear of being forced to hurt her in a harsher way, and Elsa saying those things.

But man Evie has every right to be afraid of the system, like she's definitely going to fear going near any sharp object or weapon when she's out with Elsa.

While the system would probably offer options like a small cut or something, Evie probably doesn't want to hurt her regardless if she's into it or not. And she has every right to think that one day she won't be given a harmless option or that she'd be forced to do a severely injuring option. Well by then she would probably refuse that option and take the punishment, which could lead to a tragic end of sacrifice but I'm willing to bet that won't happen.

I honestly just want consistency with the villainess system. It's just so conveniently put in place just for the sake of plot. It's such a lazy writing.

I mean, it's certainly a blatant plot contrivance but I can easily see it as a stereotypical vengeful/jealous god - plans beyond your understanding, vindictive punishment for disobedience, unreasonable demands like sacrificing your own children. In this case it has litrpg framing but to me that makes it more unsettling because you can imagine it as something a human designer/writer would inflict on others

An actual God commanding the system would be terrifying as hell, like have you seen commands of God in most stories? Like "kill your child" "build an ark and not let any other humans in" "Make a chest of pure gold", and many more

Yeah their name has six letters that start with Yvo and ends with nne.

Man from Yvonne going "ah I do remember" and her
leaving a letter, she's probably going to contact a love interest that matches that criteria, the only fatal flaw is that their name is probably not Yvonne Smollet...

Rekan1
The plain girl sitting next to me discussion 08 May 22:26
Quote

A player suddenly devotes herself to her seatmate because uhhh idk shes pretty? 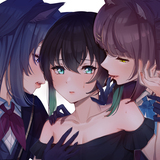