Forum › Posts by The YuriWitch

YES, there's a step beyond that, Sakurako! Have you....ugh, why even ask at this point? This wholesome UL is just too lovedrunk for Kasumi. 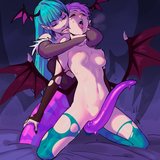 Er, shouldn't this have the selfcest tag?

Not all connections with other people have to be deep or lasting, but she too easily writes off those three as not worth her time

She's giving them her time. What she's not doing is forming a sense of attachment to them.

Neither Adachi nor Shimamura form attachments as readily as do other people. Shimamura is much better than Adachi at ordinary social behavior, in part because Shimamura has much better parents.

But neither has a responsibility to attach to those around them. And Shimamura is not so much as hurting the feelings of the three girls who want to be her friends. She's pleasant to them, they see her as a friend, and she's not scheming to subvert their interests. Nor does she think that they ought particularly to care about her.

However, in the novel, to which this manga conforms fairly well, neither girl is on the autism spectrum. Their innate capacities to understand other people are quite superior.

Adachi wasn't moved to exercise her ability until she met Shimamura, so she's in unfamiliar territory, but she builds most of many years worth of a map in just three years.

If we accepted Bettelheim's once popular theory of “refrigerator mothers”, then indeed we'd see Adachi as an autistic who is later largely cured. But the present understanding of autism is quite different (and Bettelheim has been exposed as a cruel charlatan).

Cured? Cured??? Autism spectrum disorder isn't something that can be "cured" in any sense of the word.

I still sort of wish we had gotten a NSFW epilogue for them, but even now I love revisiting this series every now and again. Why do we almost never see fanart for this series? I was never a fan of sad endings, but I stuck with KnM because it was beautiful and the relationship was well-built. But this...there's no trade-off. I don't know who this story is supposed to target anymore. It's just that poorly written.

Will these two ever get a happy ending that doesn't involve murder?

It's Heaven's Lost Property all over again, but this time it's yuri...and I feel like the MC is going to make the exact same mistake.

Breast to breast is really the breast! I mean best!

DAYUM. Koyuki, how the heck did you keep those hidden this whole time?! Also thank goodness she's back in action! But also...I feel like she might end up with the MC's coworker. Not sure why, though.

The art style is a little hard to digest, but it's simple, short, sweet without being overpowering...it's great!

Why are there a quintuplet of dogs all saying the same thing?

A little bit fast paced, but honestly it's excellently written! At this point the plastic mold facial expressions don't even bother me anymore, I just want to see them have their happy ending.

The YuriWitch
A Yuri Story About a Girl Who Insists "It's Impossible for Two Girls to Get Together" Completely Falling Within 100 Days discussion 26 Oct 15:21
Quote
190 posts
joined Dec 23, 2020

I also just realized...Square Enix has something to do with this series??? Like, for real?!

The YuriWitch
A Yuri Story About a Girl Who Insists "It's Impossible for Two Girls to Get Together" Completely Falling Within 100 Days discussion 26 Oct 15:15
Quote
190 posts
joined Dec 23, 2020

I was wondering if I just had deja vu or if something happened to the release! Glad to know it's still being worked on! And thank you so much for letting us know!!!

It's beyond me how people can defend Hima, i get she wants her friends to get along but that's just intrusive, even shiho is mad. I can't stand people that believe they're above all conflict and can solve everyones problems , like dude just let them figure out their problems by themselves . It's fine to give advice but it's annoying when You start meddling in people's problems

Some people don't learn that lesson until they're older. Some times they don't learn at all. Keep in mind these are high school girls dealing with overwhelming sensations and a series of firsts. They are inexperienced. It's a period of time that's usually a hot mess of rampant emotions and illogical/impulsive decision making.

I wouldn't go so far as to say Hino thinks she's immune to conflict, or some know-it-all who has the right answer. It's more like she's oblivious to context and is desperate to keep relationships afloat. She hates seeing people fight, and it's interfering with her better judgment.

I'm not saying she's making the right call here - it would have been much better to stay out of it. But she has the guts to take on an immovable girl with a condescending attitude like Shiho and still openly declare her support for both parties. Not many people who stick to someone like Shiho after that performance.

The feels! THE FEEEEEEEELS~!!!

At this point I just want to see it to the end purely for the sake of Yori and Hima. But it's all hinging on SS Girls coming out on top - the author has put a fifty ton weight on a balance the size of a bee's stinger and put the "I'mma do whatever the f**k I want" Shiho on top as if the whole thing won't tip over.

The story's quality has certainly dropped, but unless the problem with Shiho is dealt with properly I see no way out for the author that doesn't involve a love/hate relationship between Aki and Shiho...

I'm loving the development so far, and the body language is steadily getting better, but the faces...really look like they're masks from the same mould, you know?