Asumi keeps trying one lesbian sex worker after another. This time, she hires a girl who is just starting in the job: Asumi is her first customer. She's the same kind of girl as Asumi (cute, shy, polite) and their clumsy lovemaking is so awesome for both of them that you kinda get angry when they don't become girlfriends at the end.

But then again, this is what makes this manga different. The oldest cliché in stories about yuri prostitution is to have the customer and the paid girl fall in love in the final pages. In this series, Asumi keeps banging new girls and, no matter how much they enjoy themselves, they always go their separate ways in the end. You have to admit it's a more realistic take.

Read it in Spanish, get what you mean. In another manga they would've gotten together and the ho girl would have dropped her job. But there are lots of those already, this manga at least has originality going for it; we didn't really need another story of prostitute meets client, falls for client, stops selling herself, happy end.
Well not until Asumi finally meets her fated sweetheart Mai I mean. XDD

Mushoku Tensei is soooooooooo good.
It's the book series that established the basic concepts of the isekai genre, you know? Everything made later took its premises from there. The anime adaptation is very well done, it looks real pretty.

And I'm having a blast reading the hysterical reviews of prudes and prigs who can't stand the idea of a 40-something otaku guy reincarnating as a newborn baby who then pervs on his new mother's boobs and steals her used panties. XDDDDDDDDD

I watched Vlad Love episode 1 and enjoyed it... mildly.

The yuri is there, is blatant and is unapologizing: the mc is crazy in love & in lust with her cute blonde vamp girl, that's sure and certain. But the gag comedy is not exactly the type I like — the 2d or 3d time the school doctor machine-gun-slaps someone, I was already bored with it — and there are problems of setting and continuity that disturb your suspension of disbelief.

Like, after the blood donation trailer explodes and those poor nurses obviously DIE, there should be a police investigation! But for some reason nobody seems to care. And according to blondie a vampire should bite a human every day, and every bitten human turns into a vampire, who then needs to bite a human a day as well, and so on. Ever heard of the wheat and chessboard problem?

My overall judgment: not for anyone but what the hell, try it if you want. 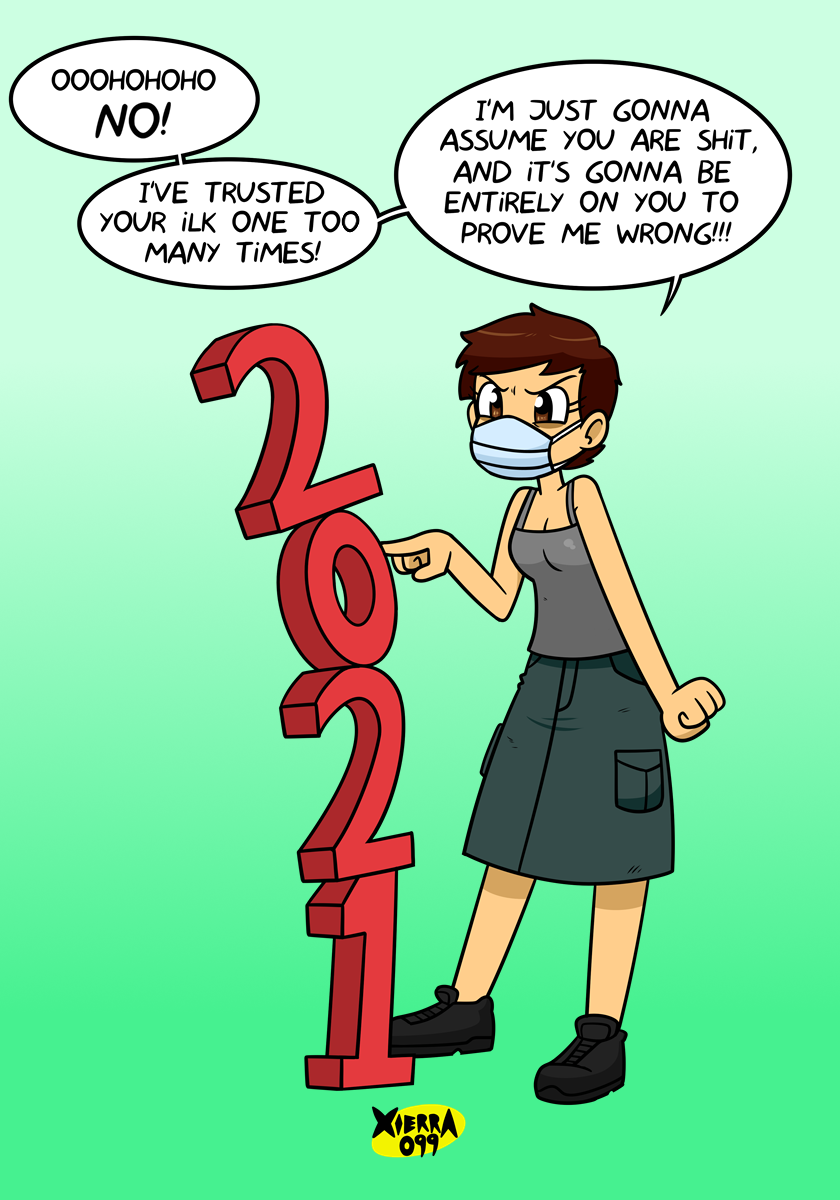 Just look at it all...
https://i.imgur.com/cXeLywX.png

Thank you for this comment!
I had absolutely no idea what that picture was supposed to be... until I read your reply, lmao.

I guess I'm better at history than at geography?

Btw I had completely forgotten that their school had male students too...

Wait, they have male students??
Those two who bump into megane girl are boys? I only notice now!
I'd have sworn school was all-girl. Did they even show boy students before?

An interesting post by Xierra099 about how the characters in "Lovin' Sis" came to be:

Here's a little look into my brain near the beginning of Lovin' Sis.

It took me 19 pages to introduce Susan's gimmick, and part of that was that I wasn't sure what to do with her.
Before I landed on pervert teacher, there were two discarded ideas:

First one was that she herself would have an older sister, and their dynamic would be like early Lucy/Chloe with Susan being the prudish one, and her older sister being basically a grown up version of Lucy

And no, this would not explain why Lucy is the way she is; in fact, the aunt's first appearance was going to feature Lucy finding out.

She was meant to be Lucy's ally going forward but I just got Val to fulfill that role.

The second one was that early on, she would find Thomas (who then just was "neighbor kid") naked on her home after a botched attempt at kidnapping by Lucy, and from then on out, she'd be fighting her desires to fuck the shit out of him as a recurring joke.

But that also got scrapped, for the sole reason that... I wanted more girl on girl action.
At this point I still wasn't very concerned with Thomas' business. Like, at all.

It needs to be noted, these two ideas did not coexisted; by the time I started thinking on the Thomas thing, I had already discarded the aunt.

In the end, I went with Susan being a total Dom with her own little harem.

It's interesting looking back on it, both the second incestual sister and the shota plots fell in the hands of Val (except with Thomas being the one who has the crush, because the poor boy needed some agency XD)

So cheers for poor Susan's sister; poor woman didn't even got designed...

Also if you needed a measurement of how little I cared to create a dad for the girls... even while planning these arcs, the idea of the father never crossed my mind. Once.
It took months and a comment asking about it for me to realize his absence. XD

It's really light fun, only with a lot of sex (and no taboos).
Looking at this relationship chart should make it downright obvious: 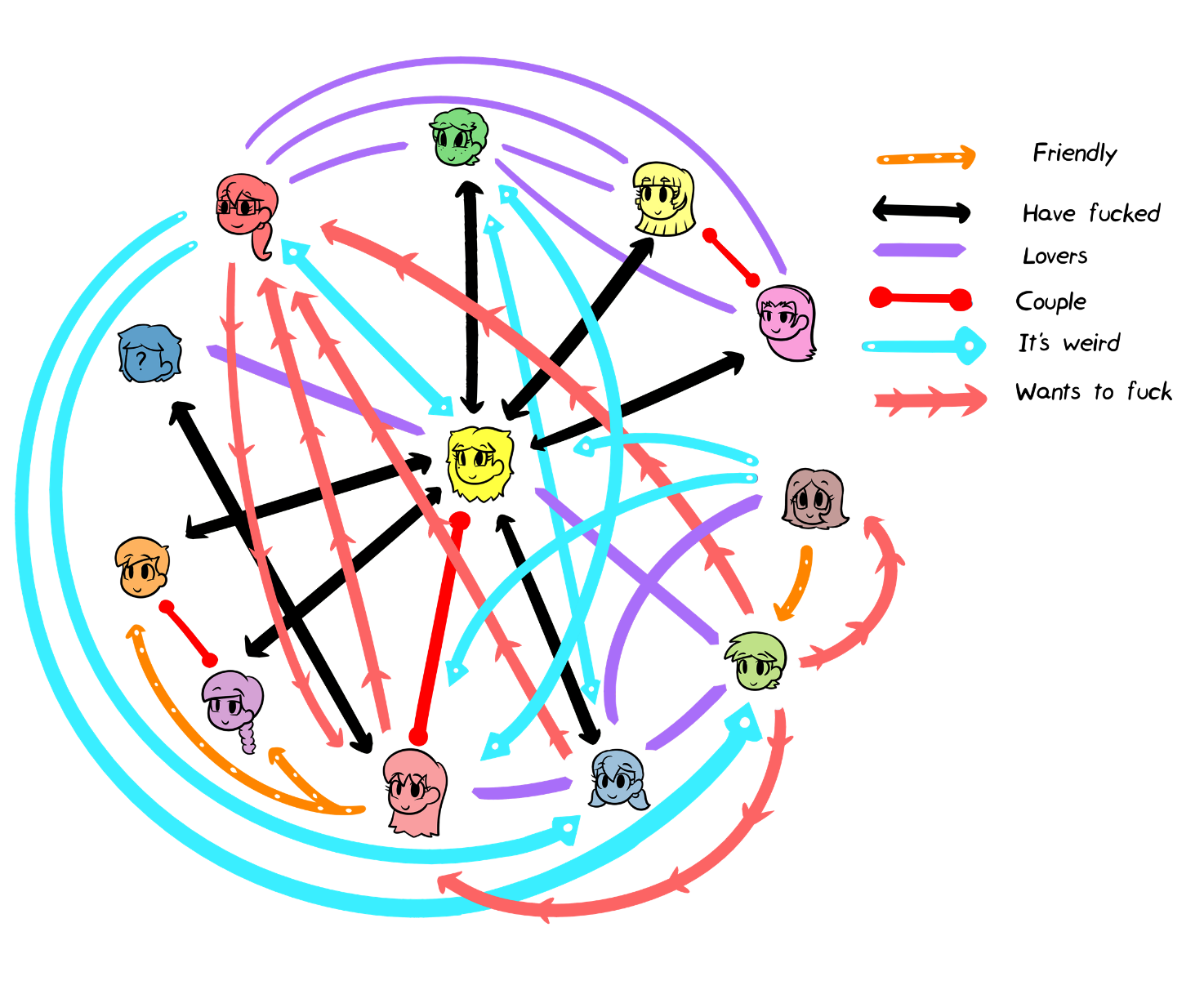 I like how there's a clear distinction between sometimes fuck partners, regular lovers and loving couples: in a story with so much sex, it's important!
I also like that on 12 characters there are 10 girls; and one of them is in the center. :v

I'm gonna share a couple of (the tamer) strips to give you a peek at the humor style:

She's a countrywoman of mine. That's how I found about her: there aren't that many people from Uruguay who can make a living by drawing online comics. She usually writes in English because, well, the English-speaking market is way way bigger (duh).

Her art and strips in DeviantArt & Pixiv are fine, but her main work is the webcomic "Lovin' Sis" which has already reached Season 3. If we had to tag it in Dynasty, the tags would look something like:
Yuri - Het - Lolicon - Shotacon - Bondage - Sibling Incest - Parental Incest - EXTREMELY NSFW.
or whatever similar tags exist, lol.

I want to recommend "Lovin' Sis" to those who dare to brave the tags just listed and feel like reading a fun story with fun characters who really really love sex (that's everyone in the comic, even the grade schoolers).

Anyone here reads the works of Xierra099? 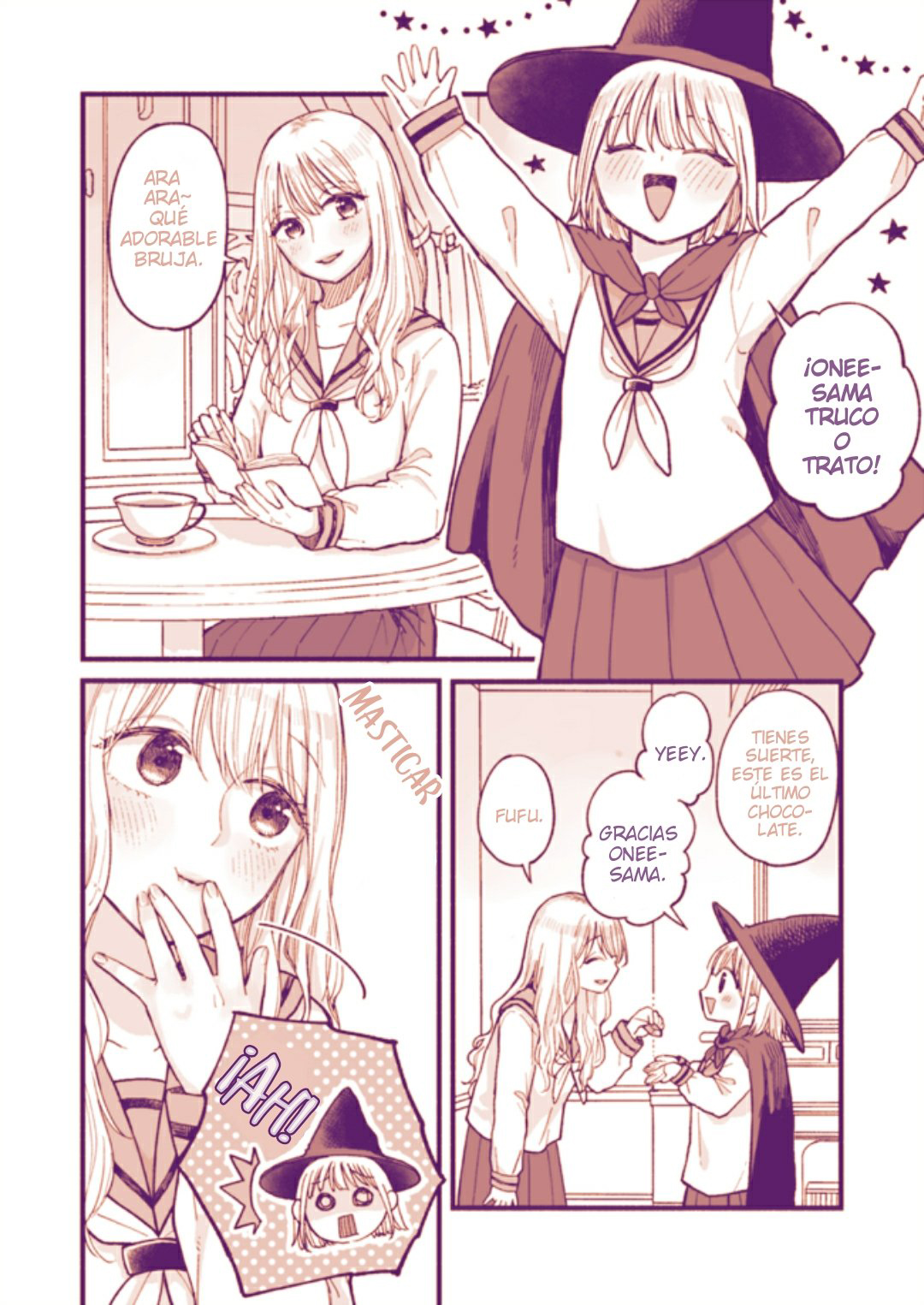 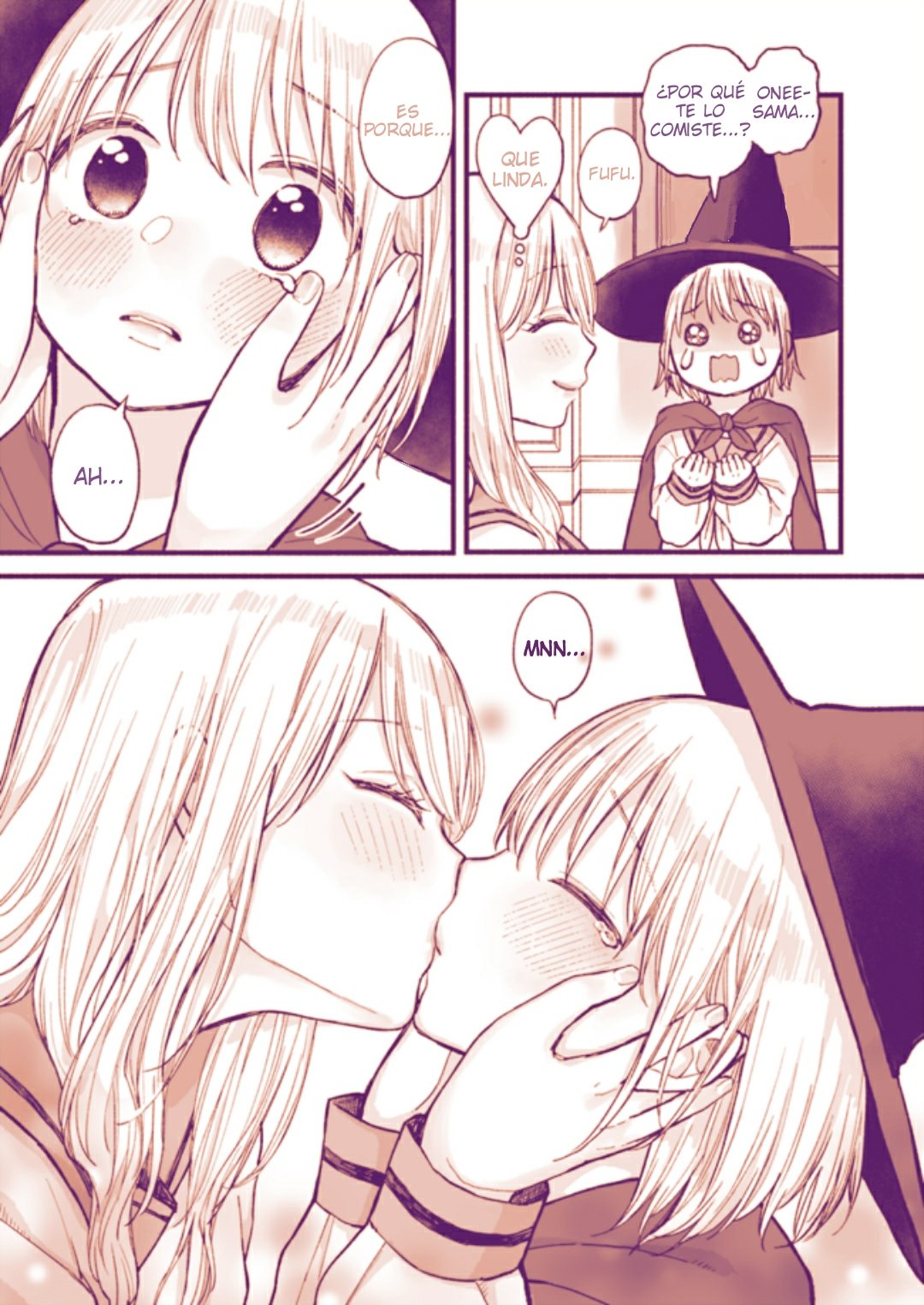 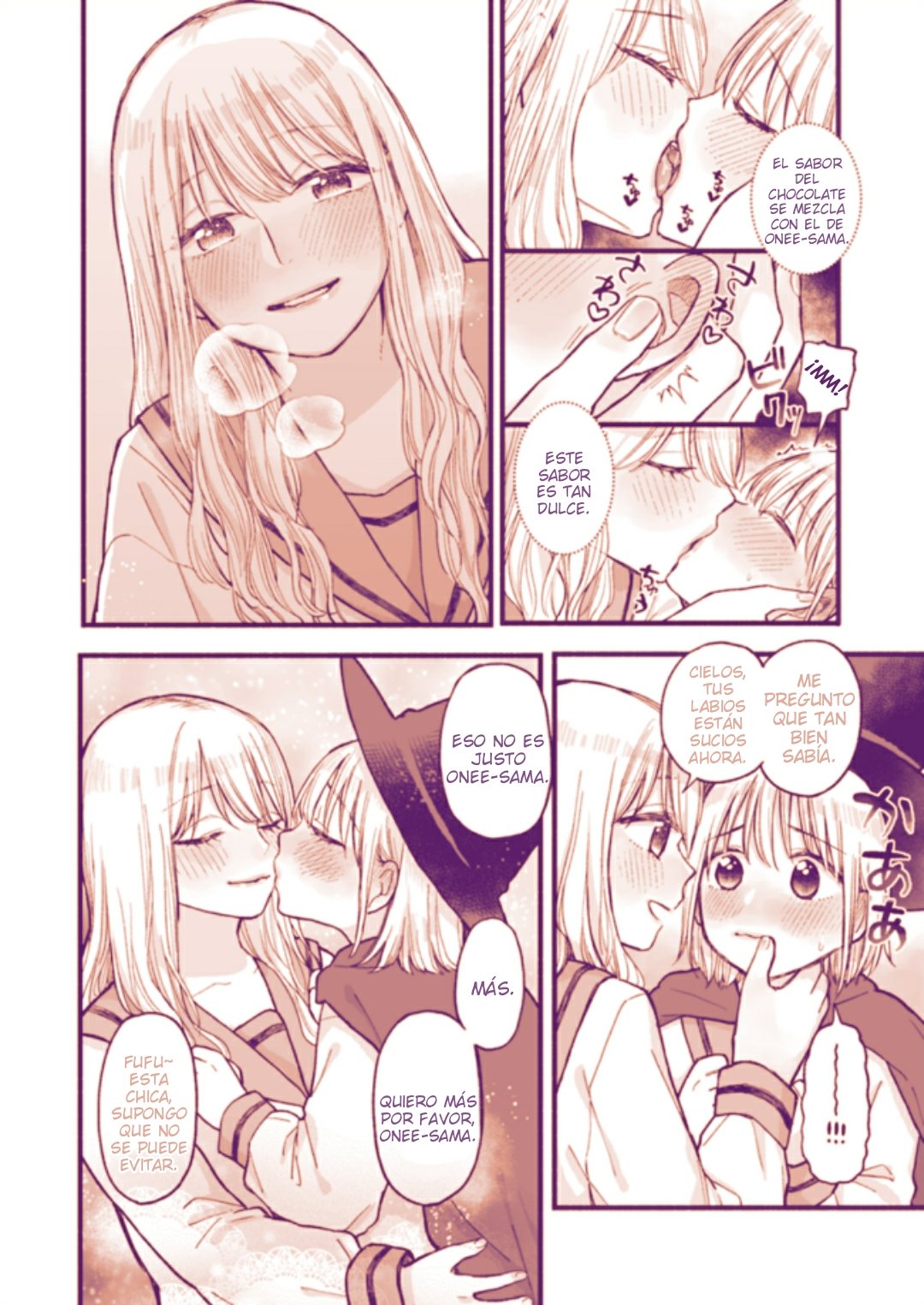 The “bog” was a term much beloved by schoolboys, and may have reflected the squelchy nature underfoot.

As opposed to all-girl schools?

Is it normal when someone says 'I'm going to the toilet' to reply 'Have fun'?

It's my usual response.

Literal (my) Dad joke: "Mention my name--you'll get a good seat."

Lmao I had never heard that one

Is it normal when someone says 'I'm going to the toilet' to reply 'Have fun'? 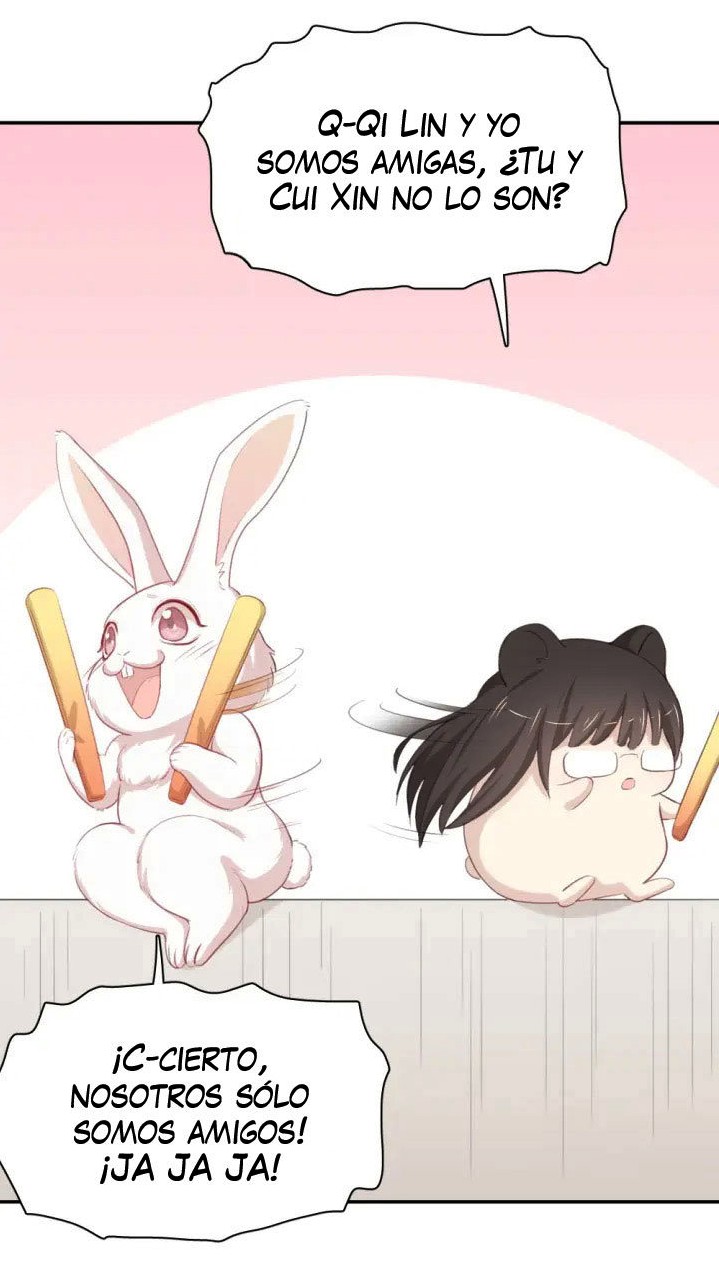 What's an "Aikatsu for sex work?" And what's a "ransora brain?"
I'm sorry, I figure it's supposed to be easy to understand since the translator casually talks about it in the creds, but I have no clue. Watch those hands, girl, you're gonna get slapped.

In a perfect world you (a girl) go to a smoking hot, super sexy, nubile bombshell gyaru and ask her for a kissing lesson and she says "Sure, sweetheart, c'mere!"

On latest news, big turning point in chapter 22. If you want to know, don't mind knowing in advance, and can read Spanish... details are in this thread, read from here:
https://dynasty-scans.com/forum/topics/15867-manga-in-spanish-mangas-en-espanol?page=14#forum_post_626589

If this series went on until I was dead I'd be happy. I'll also be happy if it ends here for the record, because I love it and if the author wants to be done that's very valid.

That's the idea! The author takes the driving seat, and drives the manga wherever she wants. We readers are just supposed to enjoy the ride.

Why would it continue? They kissed. That's the climax everyone wanted. Now there's literally no point.

Damn. Right.
I'm not buying that Evil Editor-kun is suddenly a good guy who helped Tadokoro by making her learn valuable skills, and thus deserves praise.

If Nikaidou doesn't kick that guy's ass before the series end, I'm going to be very cross. >:(