Why so many tags literally just having trans tag is enough

Im happy that the author is back with more content, i love their nsfw works

Given this authors previous works i would not be surprised if three of them end up together, that's what im hoping for anyway

I dont want this to end man

Holy fuck how did i miss this

The author's intent is fair, but how should they have better presented it to avoid offense?

The author doesn't need to present it better. People were simply expressing how they felt about the story and why. That should have been the end of it.

As long as those are not authors real thoughts it's fine

Not a transbian but i know exactly the lines you're talking about, they made me cringe too

I hate how gender is associated with sex

Gender and Sex Characteristics are very much involved in sexual orientation, attraction and acts. Not absolutely, but they are still important.

What I see is an intolerance to women and their own relationships, attractions, and wants. Why is it a slight, why is it a harm, that lesbian women and women in general want, at least for some minutes while they have sex or change their clothes, to be without male involvement to some degree?

I can understand where some of the slight and some of the pain can come from, but what causes that is not happening in these specific stories.

Why can't women, even for a second, want a space and bodily autonomy without male to some degree? People have a right to say no to what they don't want in their sex, relationships, bodies, and other private spaces. That is all they meant by "No Boys Allowed".

The female characters are literally hurt by the implication that they can't have those things without male involvement or definition to some degree. Asserting Trans this way is no different.

Why is the author accused as being potentially thoughtless of Transgender when they are writing stories about girls and women lesbian that show no indication of being Trans?

Is it really that hard?, do you really need to write an essay on how you see trans women as men?

It's just so tiring man

iI hate how gender is associated with sex

I myself used to feel exactly like those girls in the changing room oneshot even after i came out as lesbian and was all for pride and lgbtq+ folks expressing themselves even though, deep inside i was still confused and uneducated on a lot of issues

Not a transbian but i know exactly the lines you're talking about, they made me cringe too

I hate how gender is associated with sex

As of this comic getting dropped the WILLOW - Coping Mechanism (visuals) video has 73k views. Curious how high it'll get now. 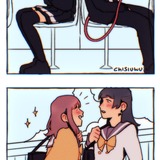 Wait has this finished already? Or am I thinking of another webtoon?

That was an enjoyable read

Ah yes Radiohead im sure nobody else knows who they are

Jokes aside im loving this series so much

Fuck volume 7 was so good

does this count as yaoi

We will see, depends on what characters wil come out as and how they end up interacting with each other

Everything BreadBunny said in the post above is spot on, Satsuki is dealing with a lot of feelings that are coming into conflict with each other and he’s gonna need some time and space to sort through them.

Attraction and sexual orientation is fluid so anything could happen tbh

This looks so good

Excited to see the story progress!

I feel the story is a bit cringy/cliché now

Dunno what you on

I love the hunters brows

More of that pls

I was pleasantly surprised to see the story show the mother in a sympathetic light despite her problematic mindset. The way to bring understanding to the world is not by rejecting the ignorant, but to educate them and give them time, after all.

I'm definitely reading hints that Satsuki is feelings things for the protag (name forgotten, it's a new series so sue me!) but it's too early to tell if it's platonic or romantic. It's also too early to tell if it's "attraction" to protag's "female self" or him in general, so there's potential for a conflict brewing in the far distance if the author chooses to go there.

Oh, and a japanese father figure who's traditional but also a fantastic fellow! Those are rare and far between, I should go buy a lottery ticket...

“Fuck you lady we’re not friends”

The literal definition of "Respectfully, fuck you."

Inspiring, a bully using the right pronouns while beating the shit out of the student