nice walkingnorth avatar. i was bummed when aerial magic was put on hiatus, but the story wasn't really going anywhere. love their art, hopefully they make more yuri eventually.

Last I checked, Ari North said in an interview that she was working on a new story. It's been several months, though.

him thinking back to kuro telling iro not to be ashamed of what she loved. i thought he was gonna be like, "thats why i hope you dont think i should be ashamed for loving dudes."

This would have been so much more interesting.

Oh, so this is the part where the childhood friend confesses to Kurokawa and Fujishiro gets jealous and finally realizes her true feelings.

i get such a huge smile from seeing all the people who’ve been on this site for so long. it feels really nice how right now i’m where you guys were at one point, and that we continue to grow together. i never realized how much this place feels like home to me :) hopefully my gay ass can grow up and become a dynasty elder as well lol

I feel slightly offended at being called an elder........

Nah, just kidding ;) It's nice that this place feels like home to you. Sometimes we get into arguments, and sometimes I have to take a break from the forums. People are complicated. But I hope you keep on having a good time here.

Wow its been so long. Yes guys we are that old. Hec I'm literally an adult now, when'd that happen-

I'd rather not think about it, if possible. I still think I can't adult properly.

Sometimes I wonder if releasing an update years later is a ploy to get people to reread the manga. Either way, I appreciate the update.

In this particular case, not likely. I don't think this has ever been released in tankobon, and Hirari is long dead. Fujio was probably bored in social isolation and suddenly remembered she had a series on standby. 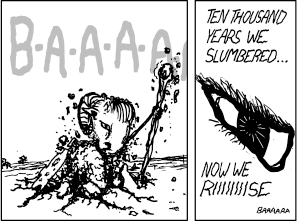 My brain: "It's sexual harassment, hon."

I've always wondered why there's no sexual harassment tag in Dynasty, by the way. And would it be okay to suggest a "attempted rape" tag to chapter 3, seeing as the characters themselves describe the situation that way in chapter 4?

cecile
You Are My Angela discussion 22 Jul 23:08
Quote

Not gonna lie i did notice the depressing undertones but I wasn't expecting pain/ sadistic type stuff.. its like both of them enjoy each other's suffering or pain and get off by it ? At the start it felt like an interesting manga now it feels a completely dark and weird fetish ? Lol

Edit: Still can't tell what happened to MC's back. It does seem to suggest that she cut her own wings (along with her partner's?), or maybe those are scars and MC's wings were cut before? Weird stuff.

MangaUpdates lists it as complete, with four published volumes, so I'm guessing it's just that no scanlating group had shown any interest in this for a while. You can find all four volumes in Amazon, in case you can read japanese.

I totally thought this series had been cancelled. Nice to see more of it, though.

cecile
Driven into Love by You discussion 06 Jul 20:11
Quote

aw this is just so adorable. nice to be young <3 and Japanese :D

it's sure as hell not nice to be a young lesbian and a japanese.

Speaking from experience, it's not nice to be a young lesbian in the west either. Or, well, any letter in LGBTI+.

cecile
Driven into Love by You discussion 06 Jul 17:45
Quote

aw this is just so adorable. nice to be young <3 and Japanese :D

Except for the exams part..

And the racism+xenophobia combo if you ever leave Asia.

cecile
Driven into Love by You discussion 06 Jul 13:52
Quote

Not that I know of. At least, I don't remember reading this one on Dynasty, and I'm a fan of Momono sensei.

cecile
If We Were to Put a Name to This Stagnant Relationship discussion 01 Jul 15:14
Quote

idk. this whole oneshot is beyond toxic. on one hand, it's interesting watching these two continue idiotically down their toxic path, but on the other hand, it leaves a slightly bitter taste as you watch the sadistic, selfish and manipulative behaviors of each girl. that said, i'd be great is there was a sequel to this oneshot.

Calling that shit sadistic is an offense to S/M. This story is simply fucked up.

cecile
If We Were to Put a Name to This Stagnant Relationship discussion 30 Jun 05:53
Quote

So essentially... one character blackmails and rapes her friend, whom secretly planned for the whole thing to happen?

So even though there's no actual rape, one of the characters is a potential and unapologetic rapist. Why would anyone want to be with someone like that is completely beyond me.

she forces herself on Yuu through half of the story is borderline sexual harassment.

Not like she ask for consent most of the time and Yuu stop her when she goes too far. She had never really forcing herself on Yuu that much beside what ? The first time in the storage before sports day and even there, she ask Yuu if she can kiss her before.

I know that none of it is really sexual harassment, because Yuu does give consent in most occasions. But most of the time it feels like she's just... yielding, due to Touko's insistence. And if you have to insist in order to get consent, isn't it pretty clear that your partner doesn't really want whatever you're asking of them?

And that contract in chapter 10, I think... "Don't fall in love with me or with anyone else." That's a little creepy.

All in all, those things work in the story, because of the way the the plot is built. It's a great story, and there's nothing inherently wrong with Touko's actions there. But if these things were to happen in real life, Touko's behavior would raise a lot of red flags for me.

Also I don't care about the ship, I only live to see Sayaka happy

I mean I don't care whether people ship her with Yuu, Haru or even Touko in a doujin, as long as Sayaka gets her happy ending 'cause girl's been through enough heartbreak.

I'm with you there, but in regards to Yuu rather than Sayaka. Because honestly, Touko isn't exactly what I'd call a great partner. She's selfish, and the way she forces herself on Yuu through half of the story is borderline sexual harassment.

(Don't get me wrong, I love YagaKimi too pieces, but if this was real life, I'd advise my friends not to go for Touko. Girl's messed up.)

Also I don't care about the ship, I only live to see Sayaka happy

Haru? Was she in the manga or something? I don't remember.

There's a series of official YagaKimi light novels focusing on Sayaka, and Haru is a character of those novels. She's referred to in the very last chapter of the manga.

I can't explain the SayaYuu passion but I feel it. AO3 has a few fics along the lines, largely from one author...

cecile
All of Humanity is Yuri Except For Me discussion 12 Jun 16:35
Quote

I wish I could forget Qualia the Purple. That is the only manga that has ever truly fucked with my head.

Quantum mechanics: fucking with people's heads since circa 1900.

cecile
All of Humanity is Yuri Except For Me discussion 10 Jun 08:52
Quote

"I don't really get it but she apparently does martial arts" lmao at that and it being an airsoft gun the whole time.

I think the martial arts thing was okay. But the airsoft gun doesn't make sense. How was she planning on killing Marika without a real gun?

cecile
All of Humanity is Yuri Except For Me discussion 10 Jun 01:48
Quote

You'll probably understand it better if you give it another read. The basic plot is not too complicated, it's just a little vague here and there.

cecile
Even If It Was Just Once, I Regret It discussion 09 Jun 16:19
Quote

"You can really tell how far apart the planets are."

https://dynasty-scans.com/chapters/even_if_it_was_just_once_i_regret_it_ch11#31 When you're so gay that you grow an extra hand.

I totally didn't notice that.