Ah see, you forgot to say "No Homo," classic mistake.

"And if you look to your left you'll see were having a blue light special on red flags in aisle 10."

Kinas funny. If church lady hadn't immediately killed isekai kun, she probably could have used him to kill isekai chan.

Sanrai
My Chain That Binds You discussion 18 Dec 09:21
Quote

Ah, Mikanuji, how I wish I could quit you. But incest or no, these works are always just too good.

Sanrai
For Each Retweet, Two Straight Girls Who Don't Get Along Will Kiss for One Second discussion 17 Dec 03:06
Quote

Sanrai
That Time I Was Blackmailed By the Class's Green Tea Bitch discussion 15 Dec 12:57
Quote 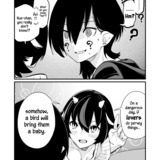 I'd say this is stupid, but this is Gensokyo. The stork is probably real, and also a cute girl.

How are these two not dating at this point?

WOW, can't show THAT in a Christian manga.

Girls, is it gay to trag the women you live in an eternal cycle of suicide? This just reminded me that the latest Horned Owl and Bat has still yet to be translated.

"Please take responsibility for this life you've created inside me"

The is all feeling kinda rushed. I don't like it, cause I want more!

He accidently got the (right) idea.

It feels like we missed something, BUT WHO CARES THEY'RE DATING! 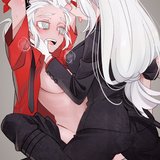 Ha, as if Lucifer can top.

Tomoko, your sense of danger is seriously lacking. You're going to get attacked at this rate.

Sanrai
A Story About an Amnesiac Lover and Her Family discussion 12 Oct 17:10
Quote

This manga is the answer to the question, "What if Mochi au Lait rewrote that one play from Bloom Into You on a particularly bad day?"

I'd read a 24 chapter manga about that.

So Leopold is a three star now, probably to absolutely no one's surprise. But just where has this sudden boost of power come from? Is it A: An off screen training montage? B: The source of her power changed? Or C: She was a three star from the start hiding her power level?

A really needs no explaining so let's start with my second choice B, and ask ourselves, "Where do these powers really come from?" And I think the answer lies in one of the clear inspirations of this work, Madoka. When Lord threatens Loco for her failure she says she will, "Crush thy wishes." Everyone's powers seems to play into their deepest desires, Loco wants to sing and her powers are all sound based, Alice has a fucked up home life and her very first use of her powers is to play house, Baiser wants to revel in her sexuality. Rather than "accepting power in exchange for a wish", this is a reverse Madoka with "Gaining powers to fulfill wishes." Leopold wanted to be cute, and that's a rather shallow wish bringing forth shallow power. But perhaps her feelings for Baiser has brought about a new stronger wish?

But hey, that's all just speculation, and I'm much more interested in option C: She was always a three star. This sudden power reveal feels very similar to another sudden power reveal of a certain magical girl. A girl Leopold is a direct foil to, who seems to have been at the magical girl business longer than her peers. Back when those two met in the classroom I dealt like their abide jabs at each other was smoke screen for something else, like they already knew each other's secret identities but we're keeping quiet because of some unspoken agreement. So wouldn't it be interesting if Leopold has been at this magical girl business longer than she lets on, perhaps even once as a good guy?

Something seems to be up, the chapter card says it's chapter 18 but this is chapter 17. Ah, I had a feeling this was the same artist that does all those Skull Girl X Aether Girl.

Sanrai
Before My Sins Are Absolved discussion 20 Sep 00:58
Quote

The one about Metera and Sutera was better.

What game were they playing and where can I get a copy?

Its the Knight and Demon lady from the work with the Mangaka X Sexbot one shot.