From the postscript, seems the author was just as surprised as the readers.

Given the time and energy the author invested into the series, I have to believe it hurt when it got axed. I wonder if the tone of the last chapter was a way for the author to convey what they might've felt to the readers. Shocked, confused, and a little hurt. Just my wild speculation, of course.

This one cracked me up.

This latest chapter reminded me of the book Sideways Stories from Wayside School, which I read when I was in elementary school. It's about a school that was built sideways and the antics its kids get up to.

In chapter 163 of the manga you can see the authors' own take on a tanned version of Katou (by way of Tomoko's imagination).

The "Flowers" series of VNs on Steam is worth looking at too.

Advance Tabco
Our Lives After the Apocalypse discussion 12 Oct 19:46
Quote

Seeing the name Mute made me think of *Mute from Analogue: A Hate Story, although apart from the name there doesn't seem to be any similarity (and I doubt one inspired the other in any event).

I'm a person who doesn't mind being punched in the gut, so I don't take issues with the tags on this story. Without commenting on whether this particular story is good or bad, the twist ending is a large part of what gives this story value, and spoiling that or hinting at it would diminish that value, in my opinion.

Is my enjoyment more important than someone else avoiding a potentially traumatizing story? I can't argue that it is. For all my words, unfortunately I don't have a good suggestion for the tagging issue. 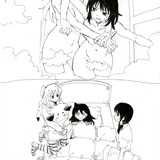 That elbow to the jaw (throat?) looks painful.

Advance Tabco
Your Everything discussion 07 May 17:38
Quote

The tendency is that siblings who grow up together generally aren't attracted to one another (the hypothesized Westermarck effect). The social extension of that is siblings who do engage in romantic or sexual activities with one another are assumed not to be socially well-adjusted people (i.e. something's not quite right with them). Unfortunately, most people who hear that two siblings are dating aren't going to have the patience to listen to their backstory but will instead jump straight to "what's wrong with them." That's the social pressure against sibling incest, and it's not insignificant.

I have to admit to this bias myself. I think in the case of this manga I would understand, but these sisters would definitely have my sympathy if they tried to move forward with a romantic relationship.

I think the older sister at the end is coming to grips with the probability that if she started dating the younger sister, the friends and family in their orbit (and society at large) would not be supportive, to say the least. I don't think she's wrong, even if it's unfair in this case.

I'm enjoying the pace and atmosphere of this manga. But I like introspective stuff anyway.

Had to do some digging but it looks like it was called Session 9. It's a horror film.

My takeaway from chapter 4 is that Midori does not have romantic feelings for Ema and has been going along with the flow. Now that Ema is taking things very seriously, Midori is stressing out over how she's going to end this relationship without inflicting too much emotional pain on Ema. Well, that's my guess anyway.

I'll never stop being weirded out by the name Azusa since I grew up in Azusa (pronounced uh-ZOO-sa), California.

Sorry if this isn't the place for asking, but I don't know how to use the IRC, I tried to post a comment in another post, but it says that it was marked for spam, so I wanted no know if it was possible to post my comment.

I'm pretty much in the same boat as this person. My apologies also if there is a better way to address this. I didn't know where to go from "please contact us if you think this has been an error," (contact whom and by what means).