sweetjalapeno15
Whispering You a Love Song discussion 29 May 15:49
Quote

Wasn't the ex-singer the one who quit ? Why would you be mad when you're the one who leave. Also did i remember wrong but wasn't ex singer ship with the Cooking club Senpai ?

Ikr I also thought that she quit and wasn't replaced and if so like why is she mad then??

sweetjalapeno15
The Reason My Girlfriend is Cute discussion 10 May 15:51
Quote

This was so fucking cute, page 14 was my favorite

Nikaidou is probably going to die the moment she sees her.

I hope the reverse also happens. It's only fair

I bet that Aki-senpai said that on purpose... Yori is waiting for Himari while Himari is doing her thing... Someone seriously have to take action and of course, it was Aki-senpai. I wonder why Aki-senpai didn't confess to Yori in the first place... she have confidence enough to say that to Himari....

I mean yeah she do it on purpose. She know the whole story. I don't know if she is completly serious about what she said. She do it because she saw how insecure Yoriis about the whole situation and she is starting to bepissed off that Himari is still hesitant about her feelings and so she decide to stand up as a rival to see if Himari will make a move or not. Considering she already know that she might not having a chance to change Yori's feeling, it's pretty bold but i think she can't bear anymore seeing the one she love being that conflicted over someone that might not loving her.

Yeah... I still don't like Touko. Let them all figure out they're gay and date other people outside of this triangle. I don't want Touko and Yuu to end up together because of how unhealthy their relationship is but that's my opinion.

I love boobs as much as anyone else but the gimmick here is so dry. If this was a one shot or 3 chapters that'd be good but this is just the same thing over and over again.

This series is really running out of ideas.

I just found out that Kagisora Tomiyaki is a guy. For some reason that makes the manga seem much more creepy, to me.

I know what you mean that definitely makes the story creepier.

Do you think rape is hot or something?

Rape fantasies can be pretty hot, yeah. As well as a lot of other fetishes that exist in a "2D environment", so to speak. Hence why cheap erotica, whether we're talking about books, games or movies, is popular.

I myself hate rape with all my might but I admit that I have dreams about being raped by a girl of course, being tied up and stuff (and I seem to enjoy it in the dream).. like, what the fuck brain. I heard of lots of people who have those sort of fantasizes, must be something psychological, dunno.

EDIT/ Got Shen'ed, but yea pretty much what Gralwer said. People seems to misunderstand what "rape fantasies" are all about.

While I don't really get it myself I can see how others would be interested in those fantasies, honestly thank you guys for telling me because I thought people here were really thinking that real rape was something sexy which made me sick.

First two chapters gave me a creepy supernatural vibe.
Creepy, rapey, age-gap yuri is so good! I love this!

Do you think rape is hot or something?

I'll read it if I want to read it. And whether I like it or not isn't what this discussion is about (at least not entirely). I felt compelled to talk about this particular manga because it really disturbed me. Anyway, your smug reaction doesn't really add anything to this conversation.

I feel uncomfortable with this one. This girl is underage and innocent. When the manga showed that she doen’t even know about sex make it seem worse. Rape and pedophile is bad even it is for yuri.

It doesn't need to be compulsion to be rape. The young lady was not in any faculty to give consent because she knew nothing of what was happening. That's rape

Maybe she should google pedophilia and rape next.

this is a mood

sweetjalapeno15
Bloom Into You discussion 28 May 03:24
Quote

looks interesting but that lady is framed like a predator and it gives me the heebie-jeebies.
also about the art: i'd be lying if i say my knee jerk reaction wasn't "oh bad art this could prolly end up trashy" but then i'd also be lying if i say it doesn't have its bright spots.
will suspend my judgement and passively follow this. 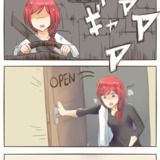 One of my favorites

sweetjalapeno15
I decided to fake a marriage with my junior (♀️) to shut my parents up discussion 27 Apr 16:29
Quote

Honestly is shocks me that they have had sex when they aren't even on first name basis.