@azero25
IMO no. The story is super rushed, the characters don't get any time to develop and are therefore bland and uninteresting and 99% of the jokes didn't work for me. 4/10 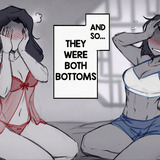 Yeah, I'm with DY4Y. No way those two are bottoms

Why are cursed harem protag tropes so cute when it’s yuri? Truly a mystery of the world and definitely not the result of bias.

I'm guessing because the character isn't as much of a dofus? Yuri goddess, please let this will be a scene in S2 Just got to ep 17 and I have to say Amitys gay panic is cute as heck. At least they were allowed to get married in the Injustice prequel comic.

I don't get the Japanese fixation over ear cleaning. Tried it out when I was in Japan as part of a spa and it was uncomfortable as hell. Maybe the girl was just inexperienced but it kinda killed it for me.

Inko-sensei has the best taste in Christmas movies. @TheAlmightyUltimus
Yang and Blake would work too.

But I use the word photo at times. Am I an outdated old fossil? D:

So basically 0.69 persons per square meter.
So people are gay because they can't avoid touching other girls.

It's actually even worse than that since the 2.25 sq. km I got was from its largest dimensions. Overall it'd probably be somewhere around 1/2 to 2/3rds the size I gave up there which could give a population density as high as high as about 1,384,889 people per sq. km.

True, though we also forgot that the 1,558,000 are just the students. We would also need to know how many teachers/faculty members there are and since this area has stores and roads and such all the other types of workers as well.

So basically 0.69 persons per square meter.
So people are gay because they can't avoid touching other girls.

This is cute, but shouldn't it have an Idiot Couple tag? Or is it too early for that? Personally I would rather watch TLJ over TPM

Not even the phantom menace is as flawed or hated as the last jedi for is it drove people away from star wars. Only dave filoni and george lucas can save it now also, I would rather watch almost anything else than go thought the last jedi again.

If TPM had been released within this decade it would have been reviled. Guarantee that within 20 years people are going to be all "TLJ wasn't that bad".
I wouldn't place my bets on Lucas, guy hasn't made a good live action movie since 1989 and actively made the original trilogy worse with unnecessary edits (disclaimer: I have not seen anything he has made after The Crystal Skull)
Dave Filoni has made some good shit recently though.

Personally I would rather watch TLJ over TPM