In general, but the question was about what delta means in a chemical reaction specifically.

It's the same girl we saw giving chocolates in a flashback in episode 4. I thought it was supposed to show that she wasn't into girls but I'm so happy it wasn't

Not surprising. Her full name is "Shadow Mistress Yuuko" 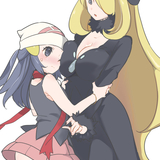 What exactly is she trying to do?

The first panel of this page fills me with warm and fuzzy feelings.

How can Elsa stay in that position while being dragged around is beyond me, lol.

She's probably so deeply infatuated with the idea of spending some private time alongside Evie that she couldn't care two hoots that she is being dragged around like a laguage.

All of the above? Omg I love Cheea's art. The lighting is always so pretty

Now that you say it, it does feel familiar… Chisato is a part of the Keke protection squad

I was going to give Selection project a chance because it looked pretty nice but then I realized it was a reality show and they would be filmed 24/7... I found that super creepy and dropped the anime asap!

I'll just say, Selection Project has turned out to be surprisingly amazing.
Amazing art and voice acting (especially ep 6), the plot is pretty great (very simple, but great), all the characters are great, and it's got great songs
My main complaint is that all but one (Uta) look way too old. But that's basically any anime nowadays.
Also, the 24/7 filming is extra creepy considering their median age is 14 (although, it's not even mentioned after 2 so I forgot it's even a thing)

Mari with long hair looks off. I thought I was seeing doubles

Well, that's how it works. Although I would have personally not added the panel saying that they got the sperm and just gone straight to their daughter already being born. ^Two videos with those titles by Amy Ordman. Although the og context is not "I don't like girls... okay maybe I do", rather "I don't think the term lesbian fits me, I'm just gay... okay, maybe lesbian kind of fits?"
I'M NOT A LESBIAN
OK MAYBE I AM A LESBIAN Civilization bends time and nature to her will If she tapped that in wouldn't that mean Sumire can at least write out pinyin? Look at her learning a language for Keke

Reminds me of Beware of the Villainess more than anything else. Whatever happened to it I wonder

and here we go the next chapter of their life together. It's amazing really because most of these kinds of stories stop with high school but at this rate we're going to see these two together for the entire rest of their lives haha

Can't wait for the marriage arc if Japan legalises it before the series ends.

what "similar reaction"? Kanon was uncomfortable with it, Chisato was weird as always and Ren didn't even know what it was and when she did know, she was embarrassed about the game more than about playing with Keke. So no, I don't think it fits.

"That's way too embarrassing" is what Kanon said while blushing furiously. Which, to me, looks like Keke's reaction to Sumire
Chisato was being weird, yes, but she was down to play it. Just with dango instead of pocky
Ren's reaction can just as easily be read as "doing that with Keke?!" instead of just general embarrassment at the game

Would this count as Keke x Everyone?

Well nobody was actually the target of the shipping, even Keke blushed only because of Sumire being rather straight forward with the pocky game, so in this case I don't suppose there any actual shipping in the first place. At least that's what I'm assuming.

The release post is tagged (?) with KuuSumi so that at least is meant to be shipping. But I think that since the others had similar reactions the Everyone tag could fit as a tall person, this is also how you ought to talk to tall people I miss them. When was the movie coming out?