The solution is obvious, induct Lanzhu into Yu's harem.

Who is Riko's mom other character that she's cosplaying as?

Out of curiosity, I've only seen the anime, do the games give enough material to ship Setsuna and Ayumu, or is this one carried by the fans?

It is a mobius ring. Everyone can be shipped with everyone. Man...after they just made up in this weeks episode

Hopefully there will be more upbeating Ayumu x Yu doujins after this week's episode.

You can't do this to me, not when Episode 12 is going to be released soon.

There is hope. Believe in Ayumu.

Looks like Ayumu does not approve of Yu's harem: 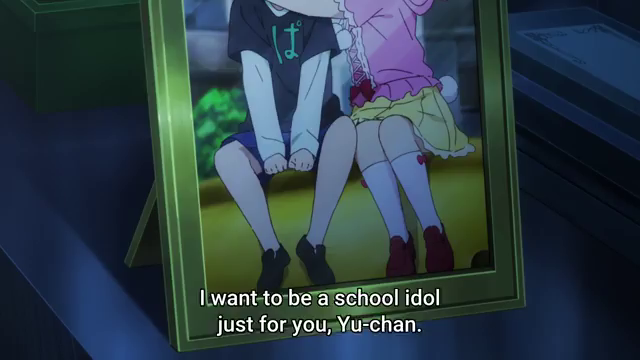 That has to be the most yuristic scene in the history of LL franchise animations. I feel so refreshed after reading this, polyamory really is the best when everyone involved love each other equally
honokotoumi is truly a blessing

Indeed. We need more wholesome polyamory amid the current pandemic to keep us up. No one mention how gay Riko is?

Read the raw for this a long time ago elsewhere; it's such a disappointment. The artist has a really nice and distinctive style, and so many of the tags are straight on my bullseye, and then... it just kind of lands with a "that's it?" Like finding out that pretty present is just tube socks or that the ice cream you picked is fish flavor.

Maybe it's because the artist's other stuff is all het or futa? He doesn't really know how to draw women having sex with each other? It's really kind of disjointed, there's no flow or payoff, and it's a freaking lactation manga with no breast sucking. Just sad trombones all around. Probably KananMari, it's the most uncontested at the very least. The only other ship that isn't really a rarepair is DiaKananMari.

ChikaYou's also really popular but there's also ChikaRiko which is not as popular but still up there (andcanondont@me).

Do not forget all the polyamorous ships. The more the merrier. The shipping of their respective seiyuus is quite established though.

Who are these characters? Nozomi: Not in the club room. The 1st and 2nd Years are staring!
Eli: No, they are enjoying themselves. Look st that KotoHonoUmi daisy chain. Now shutup and kiss me. Polyamory is the best solution.

This girl is surrounded by the exact kind of people she needs.

When in doubt, form a harem.

Lmao, the ending makes it look like Hanamaru is dating both sisters.

There are very few problems in yuri that can't be solved that way.

Indeed, we should look to solve more problems that way.

As far as I'm aware nhentai is not effected so they're likely not in the Netherlands. I could definitely be wrong though.

What about nhentai though?

and apparently the roof was closed... I don't think proper security measures were taken because it was just too >sudden but people in the first floor managed to use the fire alarm.

Yeah, I've just read this, roof was closed so that you CAN'T open it from inside the building... That is really stupid in terms of fire security. Dunno how this is ok according to the Japanese police.

No, the door to the roof was not locked and firemen can open it when they tried enter the building from the roof.

Given that there were explosions, it may lead pressure differences that make door hard to open. Also, the vicitms may have succumbed to the toxic gas and smoke when they were trying to escape via the stairway leading to the roof.

I do not get it. It was just 3 storey building, really small too, why do not everyone jump out of the window? Broken legs are better than death, I guess. Number of deaths is like from some US shooting. Why? Again, it is not some WTC where you are blocked in trap and can't escape without suicide jump.

There were 2 explosions so the fire spread quickly, probably some people died right there or were left unconscious or confused, then you have the panic, the smoke, heat that makes visibility almost null and apparently the roof was closed... I don't think proper security measures were taken because it was just too sudden but people in the first floor managed to use the fire alarm.

I will wait for the police report and the fire department statement about how it happened.

Sentai filmworks is raising funds for the victims https://www.gofundme.com/f/help-kyoani-heal

The latest press release from thd Fire and Disaster Management Agency (Japanese only) confirmed that the subject building was found to be in compliance with fire code as applicable to a building of such size and no. of occupants.