it's a carpenter's saw

the past chapters have been such a delight

nobody contests that there are women involved, merely what their tastes might be

almond
A Story about a Very Lonely Female CEO who Falls for a Lesbian Prostitute in Seconds discussion 28 Jul 15:57
Quote
379 posts
joined Mar 5, 2016

I demand this evil misunderstanding to be cleared IMMEDIATELY.

I think it pretty much will. If anything, I'd bet this will be used to get her past her old trauma, bringing us to a new place where it'll be easier to get past the, um, worker-client relationship.

MY FAVOURITE IDOL HAS QUIT??! * walks up to & stares her dead in the eyes* let's make fuck

what's next? witch and crow? witch and enchantress? actually that one is pretty easy, you just have the down-to-earth little witch meet a big fancy nervous enchantress 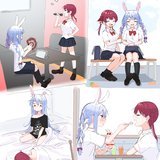 pekora with her hair down is always such a treat

i do appreciate how she just made out with those titties

i don’t give a shit anymore whether or not they’re platonic… all i know is … when them together make happy .. make wide smile … joy

they're so good for each other

Okay...this is probably not going to be an well accepted opinion... but I don't get the hype about Catradora. I have started watching She-ra and have watched up to season 3, all I have never really shipped them? I also don't get why people like Catra cause all she's done till now is outright despicable and she is officially the character I dislike the most. I just can't ship her with anyone, let alone Adora because the repulsion I feel towards her. Damn, I somehow dislike Hordak and Shadow Weaver less than her. I'm just so fed up with her character that I feel like I can't gain any sympathy for her even if she has some sort of redemption arc later. Funny cause I started watching this show because I heard of Catradora, now I have ZERO interest in the ship but the plot has got me hooked. Idk man, let's see if my opinions change about the ship later. Thanks for listening to my rant I guess.

people like Catra because she sucks, not despite it. she makes for good television but not good companionship.

this is very thoughtful and has a special charm

Sad that she has to make her own lover nothing dry about that humping 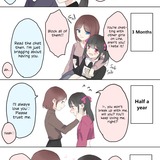 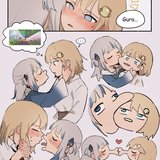 almond
Exiled From My Old Party For Being A Woman, Me And A Legendary Witch Formed The Ultimate Tag Team discussion 01 Jul 06:10
Quote
379 posts
joined Mar 5, 2016

The word “dialect” isn't magical. You can no more excuse poor word skills on the part of a thousand people by noting that they have a dialect than you can excuse poor word skills on the part of one person by treating her usage as an idiosyncratic dialect. I explained what made proper English in my earlier comment. There are indeed some dialects that are distinct yet equally proper, but none of them use “me” as a nominative, because that robs the case form of its utility.

why do you write like it's 1821? are you practising for an academic paper? are you the captain of a high school debate club?

this one goes out to everyone who likes hair and backs. peace her nose and lip looks like a lil < beak 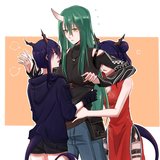 Futanari is essentially a fetish for men, in which they can fantasize themselves in either the giver or the taker. A way to make homosexuality more acceptable in their own mind, because it's a "woman" and not a man.

Not that some women don't fantasize about having a dick, but the psychological rationale is different: it's not about sex, it's about power.

Anyway, it's interesting the term and most stories about it come from Japan, a country where the expression of male homosexuality is frowned upon. It's much like the tentacles: a workaround.

i don't find the claim that it's about homosexuality to be necessarily all that convincing, or at least not that it's the main thing. after all, i could just as well make the sweeping statement that futanari is all about women that experience sexual pleasure and release in the same way as men do, and men find that appealing because it makes them understand the women more easily. futanari are mostly drawn as being particularly womanly in shape which is not something that appeals very much to homosexual men. i'd say femboys are much closer to a "safe" exploration of homo- or bisexuality for men than futanari are.

It's very weird honestly. I think the gist that I can summarize, though I might be wrong, is that at least some of the demons like the woman who went to the brothel are futa, and are a species that "has no concept of rape" but also "are driven by a desire to rape", which is very bizarre for numerous reasons and contradictory.

The demonkind seem to have no concept of "rape" because, when they are among themselves, they don't see sexual assault as different from any other kind of assault, so they don't have an extra word for it. It looks like their society is extremely hierarchical, with a clear pecking order from the strongest to the weakest, driven by a congenital desire to dominate others and established either by beating them in combat or by literally fucking them over. And when they leave their homeland, that desire for physical and sexual domination gets projected onto other species, most of whom are physically weaker -- which is how they become notorious serial rapists, despite not knowing the term.

And if I may engage in some world-building speculation, this dog-eats-dog attitude of the demonkind may be a result of their community having faced a near extinction from an outside threat in the past (not hard to imagine why someone would try to exterminate them). Not justifying rape and murder here, just saying that extreme survival conditions are known to spawn very brutal social institutes that persist for generations down the line.

i would lean more towards it being because they're descended from demons and any ostracism or extermination attempts being based on that, well, they mostly try to kill and rape as they please

at least that is the impression i get from the text 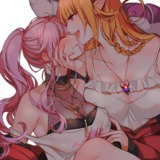 I thought this might be a slow burn but damn I was wrong Lu making moves.

slow burn on a short fuse