Kana has a medical field job too, so yeah, anonymity is really needed. Have they been subjected to any attacks in the past?

No, as far as I know they've been safe in the past, but unless it's said by Nijisanji themselves they won't really post this online, for obvious reasons. Granted, I've seen some idiots on stream being assholes but we fans usually just take the hammer and delete the comments immediately. I can barely understand japanese myself so there might've been a situation the two of them might've been subjected to but they are super careful about what they're sharing with the world, eg. deleting twitcasts ect.

So it's more like, they just choose to not label themselves, maybe considering the anties and their shit they've been pulling lately (just follow the Aloe situation and I wouldn't be surprised why they've decided beforehand not to reveal anything explicit).

She's actually an upcoming vtuber from Hololive that got terminated/quit herself because she apparently 'leaked' her live2D models before her debut was supposed to happen (she posted a stream on twitcast with her live2D which was supposed to be monitored by her manager and she forgot to delete it) and there were rumors she had a boyfriend, which she denied and asked the 'fans' to stop harrassing him as they are just friends. This was just the beginning as antis proceeded to doxx her phone number and her adress and started harrassing her. Basically the company behind Hololive blamed Aloe for what happened and suspended her shortly after debuting for two weeks. Those were almost over when the statement came from Hololive that she'd be retiring from the company.

I'm kinda glad that the company behind Nijisanji (where both Kana and Tomoe belong to) responded to this with measures against online harrassment and hired/arranged a company to watch over them and create an online report system so if they were harrassed they could report it. I'm still very hesitant about their safety still, even though these measures were put into place. They can be this happy together and open because they can preserve their anonymity.

99.9% sure they're fr together because of certain things, but they won't officially say they're together since ship teasing is okay while actually confirming their relationship isn't. Management wise anyways.

There's also the fact that they've had an argument where Kana got really sad when Tomoe suggested they keep their relationship professional so I really doubt they're faking it. The stuff they mention is way too elaborate. If they're actually just acting, they seriously deserve an Oscar.

Actually, they're just choosing to not to tell as far as their Twitcasts and streams go. There is some stuff that they decided to delete because of some stuff Tomoe said then, so some old time fans know a bit more than people that just recently started to watch them. As far as I've heard, their parents do know about them and they've talked to them already about it. So it's more like, they just choose to not label themselves, maybe considering the anties and their shit they've been pulling lately (just follow the Aloe situation and I wouldn't be surprised why they've decided beforehand not to reveal anything explicit).

Also just let me mention that both Sukoya and Shirayuki read R18 fanfics of crossick and they encourage people to draw them together regularily on their twitter and streams, they even made an R18 tag on twitter so we can post it there. @Ri-n
Yup, it's even shown in Tomoes' concept/reference sheet, it does show the navel piercing. Don't know if she's got it irl as well but she seems to have some more piercings according to Kana in their Twitcasts :)

i found them because of this and omg. they’re so cute and perfect. i really hope they continue to have a long happy relationship together.

I'm glad I was able to get people into SukoTomo! Feels like I'm finally giving back to this wonderful pair haha. I hope you keep enjoying their content!

P.s. I'm not sure if I'm allowed to say this but there's a discord server for Crossick if people are interested!

ahhhhhhh finally they're here <3 Was waiting for Crossick to finally appear on dynasty.

Okay, that is a minor point, but why translate as "Sunday, 13:00" and not "Sunday, 1:00 pm", which is obviously the title? Like, I guess it is slightly misspelled, but you can see it right in the cover.

It also says PM 13:00 right below. Not everyone uses the 12hr system. Actually most of the world uses the 24hr system :) SeriWolfy
Until the Next Station discussion 10 Dec 01:28
Quote

This is a perfect depiction of lesbians in their natural habitat in just 4 pages.

that credit page tho hahahab

Can I just say that most of what happened over the last few chaps hit me in the feels a bit too hard for my liking? I just hope they'll resolve this in a way that both benefit.....

I'm questioning myself why I'm even clicking on something like this when I C A N CLEARLY SEE THE TAGS.

not trying to be dramatic. this isn't triggering for me specifically, but it's probably something to consider. i know there are userscripts to hide stuff with certain tags so having some tags for like major character death might be useful for folks who really can't handle that kind of stuff... 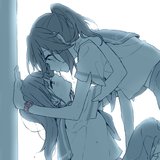 And I just watched the movie ;w;

SeriWolfy
The Law of Universal Gravitation discussion 05 May 02:09
Quote

This is why, boys and girls, you don't steal...

Oh no this is cuteeeeeeee!!!!! I seriously don't mind male characters if they're handled well, just like this lil brother. Considering that Yuna is a dunce in general and only focused on helping the lovely spirits fuck their way into heaven, I can understand why Hina/Yuna wasn't as prevalent as all the other couples early on

According to a poster on yuri-ism's blog, there are at least three sequel chapters already released, so I guess we can look forward to that.

Thank the yuri gods for that.