^ well, I'm not sure what to say to that, it's the standard for every gacha game to have awful drops and inconvenient mats farm. I just build up mats slowly, I've only done a full map farm once in my entire game time.

The arrow mats piled up naturally and now they have better drops at high world level. The fatui medals piled up during the Dragonspine event since they're everywhere there.

If you're struggling with any fight, it's usually learning how to deal with enemies easier. The chunky shield dudes are pretty simple: burn/break shield -> Ult

I used to hate the electro hammers too, then I learned how easy it's to de-shield and dodge them. You can literally walk into them to avoid no need to dodge, they look scary but are really stupid. 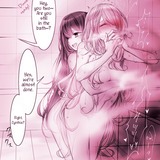 Think we'll get some ship tease in the remake? Everyone is thirsty for Cynthia after all. Keep in mind the travel restrictions. But I guess it should be better in a few months.

Y'all trust farming already? I'm doing the Ceobe part... I'm using Utage in every map. Yep! I want that skin.

Floor 11 should be easy as well

I take it back, I actually have to try for the first half since I can't Ganyu with both teams...I think I need to swap the team around. Ningguang's shield blocks some arrows but that hp goes down so damn fast.
I could just ignore the 3* clear but that's quitter talk!

I was going to build Lisa next with the 2x exp/mora, but floor 11 makes me want to just farm cryo artifacts for the next round and build Kaeya. The only other thing I need is small investment on Xingqiu for more uptime.

I was actually happy to see more of these assholes when Dragonspine dropped. Their shields go down in 2-3 hits with counter element, the only annoying one is the hydro because dendro is their weakness.
There's a shield break guide around: https://preview.redd.it/0sougci6uis51.jpg?width=960&crop=smart&auto=webp&s=f6b07ff420eee3d966318ad5ff60324de0d3ef50
Found it while typing this lol

Sucrose or Anemo MC is enough to clean the entire squad in one Q.

...you can even use two geo and two anemo and it'll be fine probably.

2x Geo 2x Anemo is hilarious but probably not optimal. 2x Geo 2 Pyro/Electro is probably better if you're running a simple build. Xiangling and Amber are free so it's an easy build.

Personally, for a completely f2p - no gacha team, I recommend building Lisa and Kaeya and go physical. Xiangling can work for a second team as well, both with Barbara or just Anemo MC. They don't require any annoying farming either.

I was about to sleep then I remembered Coco is playing Mario for the first time. Also, Mel x Ina collab in 30 minutes...
Aqua is singing again too...help...

So I think Ame flirted more with Ollie than she has with all other Holomembers combined?

I still haven't watched that one but it's not hard to imagine, they are both FLERT. I did finish Uto's Apex stream and Matsuri showed up!

Seems like Kiara got her entire channel shadowbanned. It no longer shows up on my feed and searching for her music videos (Heart Challenger, Hinotori, Wah Wah World) only brings up mirrors and reactions.

Can confirm. She is home now. And also a sheep
Actually, YT has been absolute crap lately. Sometimes I can't even check the channels, I get an error!

I don't think all the manga projects were canned but just the Marine one drawn by Mizuryu Kei since he had a public meltdown a few days ago and took his Twitter to say he had broke any ties with Cover. He seemingly realized how stupid his outburst was and quickly took down all related tweets but the damage was already done.

Ah kk. I had the wrong impression. I'm NOT in the mood to read bad news again so I just skimmed over.

Ok I'm just getting in V-tubers

Welcome! You're never coming out of this hole

I just cleared 10-3 in under a minute HAHAHAHA Bennett is so silly! I have so little investment and look at that improvement. Floor 11 should be easy as well, floor 12 is the one that worries me.

The double rewards on laylines is up. Remember you can't use condensed resin for them.

No no I didn't mean that there was a reset recently, I was wondering if all accounts start with the pity at 0, but now that I think about it, my first 5 stars in the eternal was around 78 so that's probably NOT the case. I thought it might be random so I could try the weapon banner and maybe get it at 30 or 50 pulls but now I lost interest XP too much investment.

Ah ok. Yeah, pretty sure it starts at 0. I saw Tectone suffering and he got like 3 5*s in 5 ten rolls. No staff LMAO

Yup! I got all the lewd items hahaha, the thin one, the medium size (currently one left but I need one more to lvl up Ganyu's ult) and the big blue one for Fischl ... But call it equivalent exchange or something because I'm no longer getting the Ring of Boreas (that blue ice stick) for Mona and Klee. Keqing and Ayaka also use these so I'm getting worried! I need like 12 lol

I got one of each before reset. I keep getting the wrong ones.

Today I got Amber to level 90. She's now my third level 90 character after Lumine and Noelle. :)

Getting to 90 is not worth but lvl 90 Amber is always a good flex.

Only got Broca and Aciddrop. Pain.
I wasn't sure if I wanted to roll or save the ticket but snek cute and I wanted Flint.

Gacha truly does like being contrary to your desires huh...

I think I'm ready for more AK, my brain is only partial mush atm. Imma E1 max some more girls, I would E2 some more if I had some LMD.

I exchanged Xingqiu btw, a free C2 is too good to pass up.
Rolled weapon banner and got Sac bow and Flute...an upgrades but not quite the Litic weapons or the Widsith I want.

Btw, don't upgrade artifacts when tired...I just 20d a Lavawalker piece thinking it was a Crimson witch piece...at least the sub stats are ok, in case I ever get someone that can actually use that piece. I did get a mediocre Pyro goblet! Right set but crappy sub stats, I'll take it!

Good news (on my team) I managed to reach lvl10 of Ganyu's primary fire ! she's now a oneshot killer hahaha.

You're getting buttplug drops??? I haven't seen those in weeks! Childe is super picky with his drops.

Question: Do you think or have some solid information about the pity starting at 0 with all accounts ? or the first 5 stars is completely random?

Nope, I think they're only resetting the gacha history not the pity itself. I could be wrong since I haven't been paying attention.

I have hit AR 45 now and I really hope they will add something interesting to do asap. It seems I have now finally hit the spot where I've completed all the meaningful quests so unless something very interesting happens, I will probably start playing on a lower level of intensity until they add something new. I probably won't be rolling for Hu Tao, either.

AR 45 seems to be the current progress wall. It's very slow afterwards. It'll probably get better once Inazuma drops.

^ BTW, the upcoming manga is cancelled for now thanks to creative differences(?). 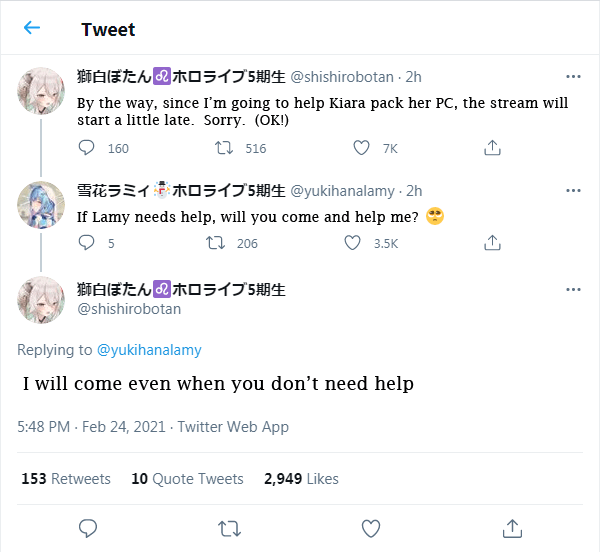 Smooth lion.
AZKi is shitposting LOL she's so cute.
Kiara is also memeing on twitter about being Gura's mum(with Calli as dad).

So many among us collabs... I thought I'd watch less YT this week....

Last but not least: 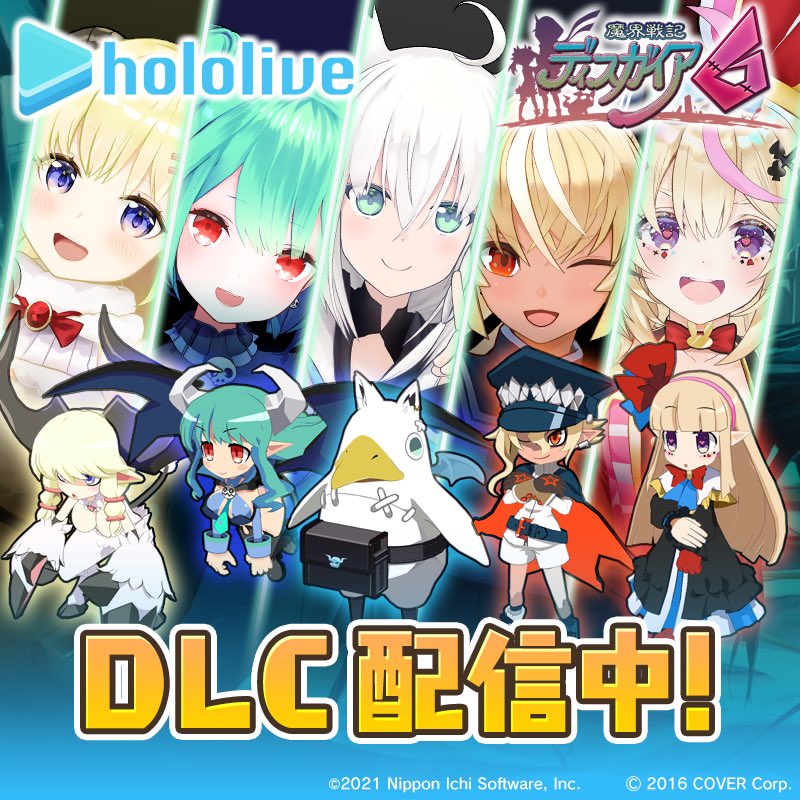 I can't escape Hololive no matter what I do... Boing boing Rushia!

Jokes aside, I can probably do the same thing I do in AL chat when I want to swear. I'll try that just to troll the Devs, thanks for telling me. inb4 ban lol

My joycon replacements arrived. Ring fit is no joke. Heard PS5 controllers have drifting too sigh 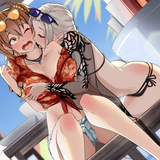 I don't care if she's low tier, she's worth the rolls! 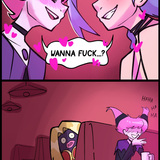 Not chaotic enough for pokephilia, I guess. 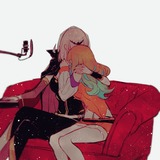 Amazing weapon banner incoming! I'm legit thinking about rolling even if it costs me character rolls...I only really want to roll for the 4* but if I get the staff it'd be amazing.

Meanwhile, I just wasted the entire weekend on useless artifacts...

This game is pure pain sometimes.

On another note, Ningguang hits even harder now that she's C2. Literally an extra dump truck of damage from being able to spam her skill an extra time since it deals a lot of damage on contact. I'm probably gonna use my future crowns on her skills to get her even more insane.

Her c2 is so damn good! I really need to finish her build but I still hate domain of Guyun and I'm farming Electro/Pyro first.

If you read my post history, you'll see I was watching her 3D concert while rolling which apparently gave me EX Luck. I did it again while re rolling tags and it worked! Probably!

Last I checked, no one had any idea what happened. Seems to be entirely internal. Kinda concerned about the future of VOMS...

Apparently, it was decided a few days before the announcement. Right before anniversary too! It must be some serious shit, that's why I'll refrain from invading their privacy.
VOMS as a whole should be ok for now but this might have some consequences down the line...I really hope not.

TL;DR: remember that time UP8 tried to replace Kizuna Ai and everyone hates it? Those two girls got new identities and a new channel. Love and Pii(pun intended), Pii had to stop for personal reasons and now Love has the channel for herself. Ai-chan collab'd with her recently.

Remember how Kiara said they should get matching bracelets during the send-off concert? Well, Calli went ahead and did them herself

Diabetes part 2. I take it back! We are not back to status quo. Kiara mentioned it again in supachat reading and she's so happy awww~
Apparently, they are too big to wear

OMG THE RIDE NEVER ENDS! Kiara just mentioned Calli was super clingy during their "dinner date" where she gave her bracelets. That she'll be lonely and she doesn't want her to leave HNNNNGGG

^ Congrats! Headpats and Energy Recharge is all she needs.

@Rye What is your friend message supposed to say in FGO? All I see is a line of stars.

Seriously? FGO needs to warn about "offensive message" smh. It says "OH MY MATSURI! WTF!?". It probably censored cuz of wtf? Wtf DW!? Guess I'll change it. That was the first thing that came to mind after that luck. 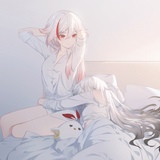 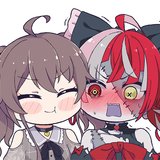 At this point, I wouldn't be surprised if Ollie posts a comment here. She's literally everywhere. 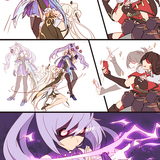 Jade cutter should get those numbers on paper....maybe?