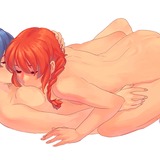 ok i know i'm way late to this argument but i'm gonna throw into the ring anyway cause i just found this wonderful piece of art.

imagine thinking shampoo and ukyo, the outright most manipulative of ranma's main suitors, are better than akane. lmaoooo. don't get me wrong, I love ukyo and she's my favorite character, but she and shampoo both manipulate every other character in the entire series to try and win ranma over. akane just wants to live her life and try to get along with ranma, and everyone else for that matter. she's easily the best of his suitors by a goddamn long shot.

i see their future of yumi dating boys she's never really happy with before realizing she really was in love with myuu all along.

Dayominator
Living with My Brother's Wife. discussion 11 May 02:18
Quote

brutal rejection. but, hey, at least that means she only rejects a brother-in-law romantically right

we still have a chance for that yuri end right

Dayominator
Boku To discussion 09 May 15:23
Quote

The fuck did I say about wanting some happy stories. Why am I being tortured.

There's like extra salt on the wound here cause it kind of makes sense in a way these poor gay kids struggle because they're in high school when it's the worst and being outed for being gay in the world we live in still isn't safe and that sucks. But I just want then to be happy.

Dayominator
Boku To discussion 08 May 02:51
Quote

all i freaking want is one of these stories to have a genuine, good happy ending with the boys getting together.

Dayominator
Your Everything discussion 07 May 02:41
Quote

tag woulda absolutely ruined the twist. not that i think incest is great but idk, i don't see the harm when they didn't grow up together and are only half siblings. I would enjoy a continuation but I doubt it'll happen.

also damn that foreshadowing with the coworker calling her younger sister.

also am I one of the few that genuinely enjoys this series and thinks it's well written or what lol...

okay this author definitely isn't good at writing a very straight-forward coherent story but I loved this and a lot of its beats. I just wish it could have had a few more chapters to make it feel less rushed.

this belongs in the "Original Mental Illness Girls Love Anthology"

thank you, i will definitely buy Xenoblade Chronicles: Definitive Edition coming out 2020

in fact i already preordered the collector's edition.

also i guess this was cute too. (jk it was really precious actually. bully turned fan changing her ways)

holy shit this is amazing and i need more. i love this already

Dayominator
A Goddess' Blessing and a Convenient Life in Another World discussion 13 Apr 03:42
Quote

kind of a rushed, bland story to be completely honest. I know one-shots aren't exactly wild with development but boy this is the most "waste of time" one shot i've read in a long while. hope the rest of the anthology delivers some good ones though. I do appreciate the step into fantasy and away from school girls for once.

love the author, cute couple, but i will never in my life find feet attractive. feet in my mouth? would probably just die at that point.

Dayominator
Run Away With Me, Girl discussion 24 Feb 23:47
Quote

is obiously not midoris fault what happened to her so far , and i´d be nice if she could break out of her current situacion but her relationship with maki is also not healthy(not for maki at least).
if tazune wasn´t such an asshole i highly doubt she would choose maki, this is not like creascent moon and doughnuts where the MC struggles to be "normal" and feels uncorfotable at the idea of being in relationship with a men, midori and tazune actually have some kind of chemistry at first, If the plot didn´t demand tazune to be an asshole for the sake of yuri they could actually be cute couple, right now midori has two options live a shitty life with a shitty person or the yuri route that´s it (not much of a choice tbh).

And lets face it the way midori has treated maki so far is actually pretty cruel,
she didn´t give a fuck about maki back then,
why midori never looked for maki all these years? why she wants her back at her life right now?. is because she really loves her? or is just because her life is a complete mess and maki is the only person in her life that is not a piece of shit and shows some human decency
i read a post on this thread that couldn´t be more truth
midori deserves to be happy but not with maki

I disagree with quite a lot of this.

Tazune and Midori didn't really have chemistry. Midori just didn't want to be lonely, and Tazune paid attention to her. Aside from their first meeting, every other instance she's uncomfortable and forcing herself to go along when around him.

Midori in high school left Maki behind, but we don't really have a full look into her psyche. We don't know how she really felt back then. She could have genuinely cared and loved Maki but a concern about their future being so young had her push away. Meeting years later through pure happenstance likely lit a fire under her about the person she loved and felt comfortable with.

I'm not saying Midori is blameless of course. How she has treated Maki has been confusing and left Maki uncertain of a lot of things and sad because she doesn't understand if she's wanted or not. But these are things that the two also haven't had ANY chances to sit down and actually TALK about because Midori is stuck in an abusive relationship that she feels like she can't escape. Hell, it's obvious Midori felt bad about leading Maki on and that's why she wanting to try and distance herself again. But it seems like Tazune being more physically abusive has made her seek out Maki again because she's an abused spouse who is in a tough spot and seeking comfort and doesn't know how to handle the situation and feels like she has to continue to go along with it likely because she's pregnant.

it's messy, it's confusing, but it's grounded quite a bit in reality. I think Maki and Midori can work, but it's a matter of getting away from Tazune and giving them the chance to really talk to one another heart to heart.

Dayominator
Run Away With Me, Girl discussion 24 Feb 23:30
Quote

Also 16 chapters is definitely longer than I thought this series would be. But honestly I'm excited. it'll probably be kind of painful but this manga is very... smart in a way. These characters feel incredibly real no matter how hard it is to look at.

Dayominator
Run Away With Me, Girl discussion 24 Feb 23:25
Quote

yeah this guy needs deep psychological help after being arrested for abuse. He was abusive from the very start and now his true colors are shining through even further.

I keep telling myself I wish the whole "secretly a girl" thing wasn't drawn out for so long and then I remembered that Mochi is writing this, and she's the queen of drawing things out unnecessarily long for the Funnies(tm) and she could do this shit for 100 chapters if she wants to and we'll all just sit and deal with it.

Dayominator
Run Away With Me, Girl discussion 17 Feb 02:40
Quote

I want Midori to be able to be happy with Maki honestly. She doesn't need to become a saint. She deserves to feel actual happiness but she trapped herself thinking there was no escape.

well with her getting stupidly impregnated what kind of escape could she possibly find with a baby on the road?i think she and her man are made for each other. two jerks together that fits pretty well anyway. she don't deserves maki. i find that for once seeing the dumper paying for their mistake is pretty satisfying.

uhm 1. she doesn't necessarily have to keep the baby and 2. if she does, it in no way obligates her to stay with the dude. I really doubt he wanted kids based on his attitude, especially the way he laughs it off as "are you sure it's mine?" he's a fucking asshole and she doesn't deserve being treated like that.

she wanted an escape from the loneliness she was feeling and got caught in an emotionally abusive relationship. It happens to a lot of people, and some can never escape, but those who receive support from other people (like Maki) can make recoveries. I don't think that makes her a jerk either, that's so dumb to even say. she's just worried about her future and as we learned was left alone by her family to the point that it left her with some serious trauma. she's thinking she has to give up the things that would actually make her happy in order to not be alone and she needs the chance to heal. The reason she's thinking about Maki is cause she realizes she feels safe and secure with her. Maki alleviates the loneliness and anxiety in a different way than other people around her, possibly because of their history and lingering feelings.

I don't think Maki alone is the solution to all Midori's problems, she realistically needs mental help to help her get over her trauma and the feeling of being abandoned/alone/etc, but Midori needs a safety net to help push her forward and Maki seems like the only person who genuinely cares enough about her to help.

Dayominator
Run Away With Me, Girl discussion 16 Feb 16:22
Quote

Ahh this hurts but I understand what Midori was thinking. Wouldn't have been what I'd have done but loneliness is hard to deal with. Then her relationship turned abusive and manipulative but she didn't want to be alone.

I want Midori to be able to be happy with Maki honestly. She doesn't need to become a saint. She deserves to feel actual happiness but she trapped herself thinking there was no escape.

also i don't see why parents couldn't be a succubus/incubus couple. they never implied they were unable have kids together and get the sustenance they need from other people still.

Never been a big polyamory fan but I'll read it because canno.

This new retelling seems way more focused on the story. I like it way better so far. It still has the comedic kicks but without being drawn out with endless side gags that slowed down the pacing between nekozaki and mikoto. This second chapter really nailed that I'm for me.

As much as I love Arata Iri the original felt like nothing ever happened. It was slow as hell. This was a much needed change.