The scar of "we have yet a lot to learn about Nagi."

This is a trainwreck, and I really want to see how it all wraps up.

I stopped reading a few chapters back; now I'm just waiting for the wrapped up series, to see if it's worth it, and reading the comments...

Pairing tags would be very useful for this series, too.

Ayako's wording of her thoughts and Asuka's dream make me wonder... Could Asuka be adopted?

Edit: I had some related theories almost two years ago, too...

Lolz. I wonder how upset people would be if that was the case. I wouldn't mind, but since incest was the main concept (sorta) than pulling a pseudo-incest would probably irk the main readers. That's just a guess, though, idk

Ok stop that shit rightnow Asuka is Ayako's daughter, there is no doubt about it. No adopted things or whatever.

Thanks. I didn't remember that extra at all. Now I wonder what else Asuka's dream was about.

Aside from that, it surprised me no one voiced worries about Ayako running into Akira's arms (bed), to divert herself from Asuka. I finally remembered what had made me feel uneasy about such a development: The end of chapter 15 reminds me of 15Y+. (Coincidence with the numbers?) I really hope this prediction won't come true, either.

As for Ayako, I also thought that the "someone like me" part was referring to her feeling being broken/damaged. So Verdant's more extensive speculation may be more correct than not. It's a really good guess, though then it's hard to imagine how this story could have a satisfying ending if Ayako and Asuka became a real couple.

I don't really like the turn this story took. I wasn't soo much into darker story like fucked up childhood, etc. I guess I'll wait until the story ends if it's really that dark.

Chapter 15 made me think the same. Until now I read the updates as soon as I had noticed them, but waiting for some chapters to pile up may really be better.

Ayako's wording of her thoughts and Asuka's dream make me wonder... Could Asuka be adopted?

Edit: I had some related theories almost two years ago, too...

Kiena
The twitter of girls and waking of shyness discussion 13 Dec 03:49
Quote

Also, if you're introducing someone to yuri, please give them a book instead of sending them to a site with pornography on it. This may be silly coming from me, but piracy is still bad, m'kay?

I put books into people's hands, if they wish, as I buy both Japanese and English publications. Though I try taking care of the books as well, so unless someone visits me, rather than bringing the books somewhere, it's much easier and safer to give a link. Also, if someone is just curious what yuri is, asking them to buy a book is probably too much.

Kiena
The twitter of girls and waking of shyness discussion 12 Dec 16:13
Quote

I wanted to mention this, especially after all the "leave the fiction we like alone" replies, but decided not to, because it'll probably fall on deaf—angry and/or troll—ears:

Then once the grooming in it got pointed out as being wrong, despite how wholesome it's depicted, to answer that question, instead of just replies like "it's just some interesting fiction, we know it's wrong, don't get bent out of shape over it," some people out of feeling something of theirs being endangered, or only for trolling, started defending the characters' actions, moving the conversation again beyond the whole "it's just fiction" reasoning, or even went to "I'm not a pedophile, you're the pedophile!" style of replies.

The replies explaining away or romanticizing the depicted grooming itself are admittedly scary. Not for the people doing that being pedophiles, but for such replies potentially encouraging those who are, and for the signs of ignorance that may apply in the real world, too. What would you do if you were that colleague or schoolmate Ruki talks to, or if Otome were your friend, sister, or daughter?

Kiena
The twitter of girls and waking of shyness discussion 11 Dec 21:37
Quote

certain things, like listening to Otome peeing, the lap hugs, the staying over without the parents worrying, started popping up as ways Riku, a working adult, is abusing the relationships she established with Otome and her family.

Why thought ? Most are normal behavior (beside the whole pee thing that i'm not a fan of). Yeah there is the 3 vows but that's normal things a nice person while do without any other intention.

The hidden intention is exactly the reason. Those things are normal only on the surface, and only Riku and Otome are aware of that. (Riku's colleague isn't helping.)

Kiena
The twitter of girls and waking of shyness discussion 11 Dec 20:46
Quote

Not the social media service, nope. But "twitter" existed before that as a word for a kind of sound, you know.

Waiting for a kid to be of age to start dating them is still illegal and the person in question still a pedo.

Hey what ? How waiting for her to in age to date legally is illegal ? That doesn't make any sense to me.

Get over yourself and pull that stick out of your ass. Grooming involves actively shaping the child's psychological development, not simply waiting for them to grow out of being a minor while interacting with them more or less no differently than any regular acquaintance/neighbor.

This may not be too interesting, but I still felt like writing about my thoughts and conclusion regarding this, after reading the manga and these comments:

The truly responsible thing for Riku would've been not to make that "future lovers" promise, or to call it off as soon as she thinks it over. Whether Otome dates someone else before she becomes 18, or keeps being in love with Riku and waiting, should be completely up to Otome. Riku could have told her back then that she might be interested when Otome becomes 18, kept the right distance, and by waiting she could keep taking the risk that Otome may choose someone else in the meantime, on her own, without establishing a relationship that is more committed than it isn't.
I could write more about why that would be more wholesome and healthy in even more ways for both of them, but it is long enough already. Thanks if you've read it.

TL;DR
After learning about grooming and thinking about its implications, this manga lowered my tolerance towards such concepts, even in fiction, which is probably the opposite of the author's intention...

Nothing is known about Midori's circumstances yet, but even if her actions were motivated all along by outside forces not having been shown at this point, she keeps majorly messing up her communication with Momo and causing damage... If the reason for hiding Midori's true love being Momo is just to fuel drama, I'll most likely hate this.

With nothing else to the author's name, I feel that I don't need one more of a plot like this. I'll try ignoring it until it finishes, and if there won't be a whole happy crowd telling it was worth the ride, it may be the first manga going into the bin, like that other "dumb piece of paper" should have been.

Still, plenty of thanks to the scanlators, I may just not enjoy this particular story.

Creepy. Especially the part with the cream.

Why is there so much confusion about what happened when?

If the title were true (without chapter 0) this would be very depressing. After reading chapter 0 the whole thing became very weird, and maybe almost just as sad, though. The plot seems to be that Maya can't understand anything about love after the kindergarten trauma and repressing her feelings completely for Yuina during elementary school. Or she just refuses to understand and keeps a straight face because the girl she loves is not "gross/weird/etc." Still quite depressing... Here's hoping they'll have a very happy future as they overcome this and that will make it a nice read moving forward.

And hey, who else was a bit afraid that the senpai was going to end in the "harem" too ?

They just barely met. I still think she will. (They are the same age, though, so she isn't her senpai.)

So this unicorn wants her to be a virgin but also wants to eat her?

Unicorn, you can't have your cake and eat it too!

She can have lesbian sex and still remain a virgin.

Kiena
There's Something I'd like to Tell You. discussion 21 Oct 05:58
Quote

Hi, we've tagged all of Mo's posts so you can browse.
https://yaoi-blcd.tumblr.com/tagged/mo-xiaonan

We have tags for all the other recurring characters as well.

Thank you! The answer is chapter 168.

Ok. I've missed this this series for a long damn time. Can someone tell me, what happened to the pink-hair girl arc?

It looks like Mo Xaionan's plot threadd was dropped in mid-gallop, so what we know at this point is just:

SunJing was visibly bummed the next time she saw Qiu Tong, but got over it as soon as she saw her bae.

Mo was visibly upset with Sun Jing the next time we saw her.

All signs point to "she confessed, was shot down, and is now hurting over it." But the plot just kind of jumped tracks to Sun Jing and Qiu Tong dating and being flirty, possibly because the author needed the WAFF injection to deal with an oppressive government. (Or maybe as a fuck you to her publisher, who apparently wouldn't publish her book because it was explicitly romantic?) 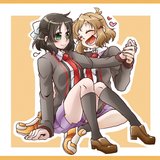 Miku: Um, Hibiki... There was something I've always wanted to tell you.
Hibiki: Yeah, me too.
Miku taken aback
Hibiki: I hope what I want to tell you is the same thing you want to tell me.
Fade out
Title
Fade in
Miku: So we both are in love with your father, Hibiki!

(Otherwise why did he even have scenes in this season? Plus Hibiki was only able to win with his help. It was so jarring.)

Sorry for the tangent, but it's just an actual topic that in some countries that is punished by prison, and unfortunately there is at least one trying to pass a law for it now...

In my opinion the negative reactions are more severe than this ending deserves. It isn't perfect, for several reasons, though as others said, there are so many endings far worse than this. I hope to see the next work of this author soon. So far they were always quirky with fairly satisfying endings. Having room for improvement isn't a bad thing, either, in my book. 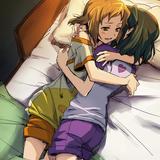 They say "friend" so often in this season that I already forefeel my utter disappointment. Then I'll just remember it by my alternative title forever: "Family (but Mostly Father) Issues: The Series With Transformations, Singing, and Yuri-Baiting"

This had just been getting worse and worse, then suddenly it became awesome... kind of. An interesting break from waiting for a non-flashback 1 x ½ chapter.