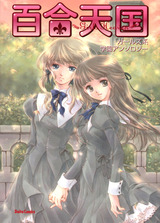 An anthology of fluffy school-age stories; also called "Girls' Heaven."
In "Shining Mars," by Hoshiai Hiro, Aya loves her childhood friend Yuna but Yuna is good at everything and Aya worries that she's not good enough for her. The metaphor of Earth and Mars is used to describe their relationship/situation.
Kouiti's "Omoi no Kisetsu" is about what happens when two nuns-in-training are discovered to be having a relationship with each other.
In "Rooftop," by Teramoto Kaoru, a girl confesses her love to her crush many, many times, but her crush thinks that she's just saying it out of pity.
Usami Wataru's "Bound By A Red String" is another all-girls' boarding school story, in which romance blooms between two roommates.
In "The Glade in the Forest Behind the School," by Kasuga Miho, two girls share a secret place, and become close because of it.
Shinonome Moegi's "I'm Here" is an extremely short story (4 pages) in which a girl returns to a place she lived in as a child and sees a childhood friend again.
The yuri in Kashimami's "She, I, and the Red Book" is more subtext than maintext, but it's a nevertheless sweet story about two girls and a book with a startlingly red cover.
Tenshinrou Ryouichi's "You're Lovelier Than a Rose" is a parody about an all-girls school with an underground student council that's a bit... unusual. It makes a few funny references, to things like Marimite and Takarazuka.
In "Autumn Sleepiness," by Arata Toshihira, two girls are stuck coming into school on a Sunday to do work for the Student Council. But why is one of them so sleepy?
The setting of Yamamoto Takuhito's "Beyond This Sky" is a religious private school for orphans. A girl consoles a new student who has just come to the school.
"Friends," by Kamei Juri, is the story of two particular girls who become friends, one of whom just happens to be the Board Chairman of their school.
In Heppoko-kun's "My Partner," which takes place at a nursing school for girls, the main character befriends another girl whom nobody likes and ends up going overboard when practicing CPR on her.
"Princess Academy," by Oshida J-O, is about girls who are training to be "illusionists."