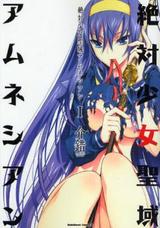 An alternate universe story starring the yuri couple of "Kannazuki no Miko" and "Kyoushiro no Towa no Sora" fame, Chikane and Himeko.

In this series Himeko is a nun who leds a peaceful but lonely life, having lost both her parents and her beloved older sister.
One day she finds a girl hung inside the church, impaled by a sword. The girl, who strongly resembles Himeko's dead sister, is still alive and calls Himeko's name. She reveals that her name is Chikane, but she has a memory loss about everything else.
From that moment, Himeko starts to be targeted by a group of people who want to obtain the "Dragon Cry", which is said to be hidden inside her body. Chikane (after trying to know Himeko "more intimately") vows to protect her.