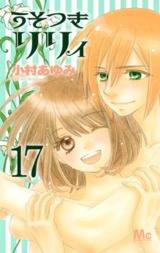 Usotsuki Lily (Liar Lily) is a shoujo manga by Ayumi Komura. It follows Hinata Saotome, a 15-year-old girl just entering into high school. At the beginning of the school year, she is suddenly asked out by En Shinohara, an attractive boy in her grade and enthusiastically agrees to go out with him. What Hinata only realizes later to her embarrassment is that En usually comes to school dressed as a girl.

Hinata tries to quickly break it off with En, but seeing his depressed reaction makes her feel bad. En is serious about going out with her, and explains that he has an intense hatred of men. So much so, that he doesn't even want to look at them and is even compelled to destroy windows and mirrors that show his own reflection. Despite his feminine appearance, however, he still acts as a guy and feels like one on the inside too. Hinata agrees to be his girlfriend, even though she realizes it may appear she's dating another girl, and must deal with her boyfriend's cross-dressing lifestyle.