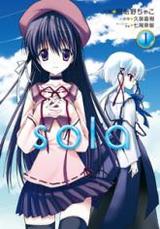 Yorito is a high school student who likes to take photographs of the sky. A chance meeting introduces him to Matsuri, but she is no ordinary girl—it turns out that she’s actually a 350 year-old Yaka, an immortal being that cannot go out into the light! As such, Matsuri has been forced to live a life of solitude, and Yorito is the first friend she’s ever had.

But there is much more to the Yaka than first meets the eye, and a sword-wielding man named Takeshi seems intent on harming Matsuri, but for what reason?

Now thrust into a supernatural battle, will Yorito have the courage to protect their friendship for Matsuri’s sake?