Animal ears Comedy Moe up the butt Slice of life 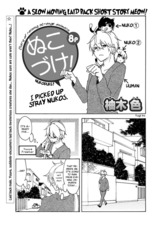 A heartwarming story about the daily lives of a freeter named Yuuya and his two part cat, part human pets. - Manga Updates

Note: Nukoduke! moved to Manga Park after chapter 108. Manga Park uses a different numbering system, so new chapters will be released following that system. This begins with chapter 200, which is equivalent to chapter 109. There are no missing chapters between them!