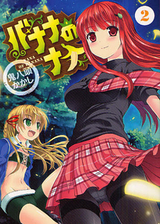 Though this series is marked Completed, it was cancelled, and thus has a very rushed ending.

"On the world that consists of a single giant continent called Dokkanon, most people have some kind of special ability. Those who have a high-ranking ability, such as the ability to control water, are respected and granted much power. Those with low-ranking abilities, such as Nana, who controls bananas, and her best friend Ringo, who has super-powerful legs, have very little power in society. When Nana and Ringo were kids, they were awed by stories from Ringo's adventurer father about a land called Oz, where a god lived who could make any wish come true. Nana and Ringo swore that they would go adventuring together when they were adults. But as time went by, Ringo's father vanished while adventuring, and Ringo became much more aware of the social stigma associated with adventurers. Will the two of them find the strength and courage to follow through with their promise?" -Manga Updates