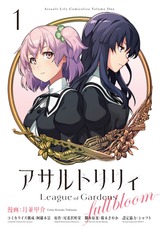 When the enigmatic life-forms called the Huge appeared, they nearly brought the world to ruin. But humanity studied the energy called magie and created CHARMs, potent weapons against the Huge.

Teenage girls, who proved to resonate the most with CHARMs, became the vanguard in the war with the Huge. There is a name for these girls who fight against humankind's end. They are known as elegant flowers of battle—as Lilies.

A manga adaptation of the stage play "Assault Lily: League of Gardens."