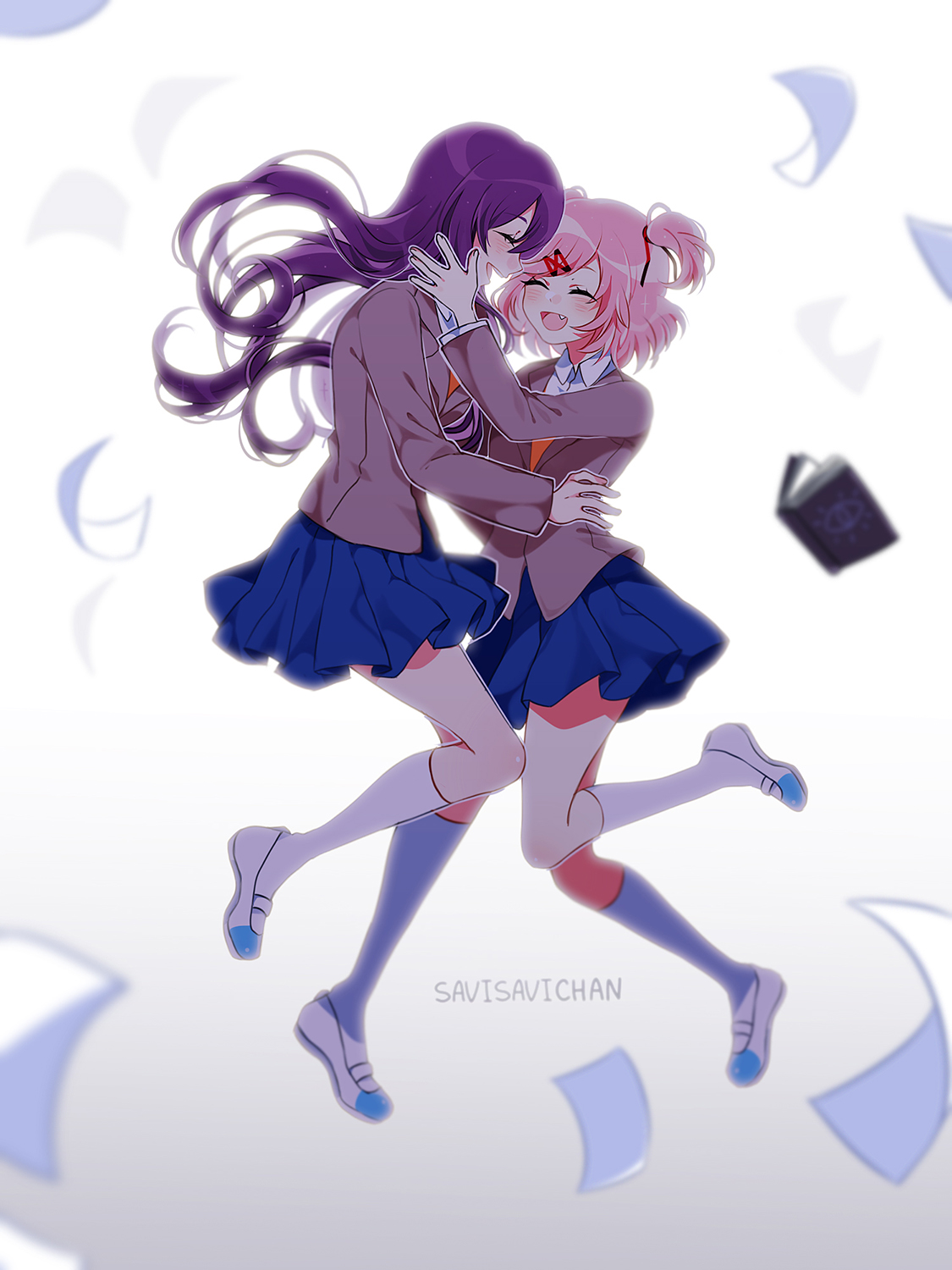 at least they had their good ending

I need more DDLC yuri in my life. If only because I can ship the Yandere with the Tsundere and pretend it's love/death part 3.

@Swag Wagon As a person who's still sad we didn't get a love/death part 3, I really can't blame you.

@BlueBerry
Monika figured out an easier way to make the MC take her. Make the others not want him (gay).

Actually, I've always thought that there were heavy implications that Natsuki and Yuri do have feelings for each other, but the "game" forces them to fall for the MC (if the player goes down their route). I thought that there was a lot of dialogue and even some poems that kind of pointed towards that, but I've never seen anyone else bring this up, so maybe I'm just crazy.

As for what BlueBerry said, going down Sayori's route in act I and a scene in act 4 show Natsuki and Yuri reconciling with each other and growing close. There are also multiple lines of dialogue sprinkled throughout acts I and II that suggest that Natsuki and Yuri actually want to get closer to each other, but end up fighting because they are too awkward.

@TheLostLight Tell me more about those dialogues and poems, I'm interested.

-Spoilers for DDLC down Below-

All of the poems can be found on the wiki: Natsuki Yuri.

Two of the few poems I particularly find to be of interest are the beach poems from both Natsuki and Yuri, which they wrote for each other. Natsuki's poem has a clearly romantic style to it. If you are feeling skeptic, you could say that it's purely stylistic and metaphoric, but it is there. Yuri's is less overt, but if you read it with the right frame of mind you could interpret it to be quite suggestive itself.

Another two poems I find interesting are the two cryptic poems each from Natsuki and Yuri in Act II. They get pretty graphic so I won't repeat them here, but they seem to be directly related to each other, particularly the end of Yuri's cryptic poem.

Also from Natsuki is the "cry for help" poem which mentions that "she always wanted to be better friends with Yuri." As well as Amy Likes Spiders, which has the obvious intention referring to Natsuki's like of manga, but if you want to be extremely critical of every detail, the poem could be interpreted to have a second meaning.

As for the in-game dialogue, I don't have access to the game right now for various reasons. The lines I'm referring to are scattered throughout the game, but they're there if you're looking for them. There's one line from Monika specifically about how she can't stop the girls from falling in love with you and it's like they're hardwired to by the game, or something along those lines. This is obviously after she reveals to you that she's been driving them crazy by tampering with the game files. I believe there is also a part in Act 4 (after you delete Monika) that shows Yuri and Natsuki reading together, or something along those lines.

Anyways, sorry I couldn't be more help and post actual dialogue from the game. I'll be able to play it again in a week or so, so if you want me to take some screenshots I could do that then, before school starts back up for me.

@TheLostLight Oh my! Thanks! And sorry for the late reply, Dynasty doesn't have notifications for me.
I'm going to take a look on the poems.
Was looking for you on the Discord, I think I found you, please accept the request~ So you can show me some screenshots!