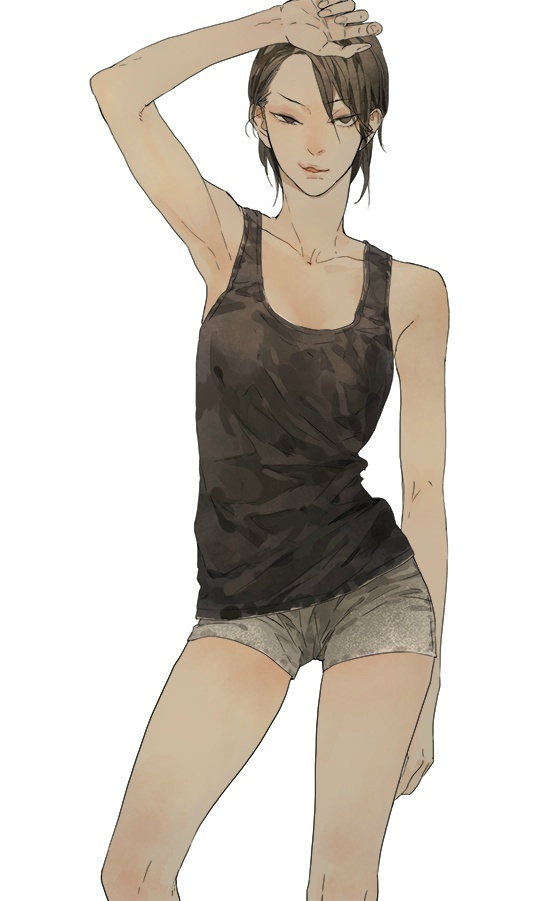 She became such a tomboy =/

^is that a bad thing?
She's still hot, maybe even hotter

She's super hot :o I don't mind that she became tomboy because the author create great stylish clothes that's why she look cool and hot anyway :3

I don't mind tomboys. But when it gets to the point where you really can't tell if it's a girl unless they're naked/half clothed, it can be annoying.

I like how she has androgynous appeal. She's not quiet feminine and yet doesn't give the" man with a vagina" vibe.

They are yeah.
But some artists tend to add them to a story as a fill in for a male character. Especially when the setting is an all-girls-school :P
It usually gives me the impression of gay at school - het after graduation. I'm glad to see this couple isn't like that though ^^

I'm with you Haku. I understand that some attacks to tomboy, some attacks to feminist, but in a girlxgirl relationship, I personally don't think that one of them need to represent a man as in some artist clinging to, and yes, she looks a lot cuter with long hair in my opinion.

I like her original, long-haired version as well. There's nothing wrong with tomboys, and she looks great as one, but the tomboy/girly-girly thing is pretty worn out now (IMO). Both of them with long hair, and just different personalities, is more like a real life lesbian couple too.

Some lesbians really are masculine/aandrogynous and it is very weird for lesbians to be so objectified in this conversation that the very existence of masc women is a "worn out" concept and their relationships aren't "real life." Are any of you people even lesbians and part of an lgbt/queer community??

I think she looks amazing either way..

@TheHaku - They are not written to be stand ins for male characters, they are written as a type of female character.

She looks hot either way. But I have to agree with @YuriShu12 and @aoinokansei. There are lesbians in some Manga that is boyish and has a trait of a guy, but that doesn't mean they are stand-in for Males. I prefer both though, Tomboys often looks cooler. But then again Woman X Woman are hot. :D lol I'm no lesbian so I'm in no position to categorize them. I simply LOVE YURI.

I prefer her long hair

It's that elbow. Totally a butch elbow.

She was a tomboy from the start. That was obvious from page one of the manga. And goddess take me if she isn't the hottest manga/anime character I've seen in years. fans self

I agree with Selene. She was a "tomboy" from the start. She only cut her hair.

thank you, @aoinokansei ... these comments kill me, but i guess what can be expect from straight people lol.

but seriously, butch/femme isn't "worn out." women who are masculine are not "worn out." we're real people. saying that both women being feminine "is more like a real life lesbian couple too" is so ignorant. lesbians and bi women come in all shapes and sizes and styles. a lot are butch. MANY are in butch/femme relationships--this dynamic has a integral part in lesbian history. i'm butch and my girlfriend femme, and i know many lesbian couples like this. this is just how we are ... and also the other thing about the idea that butch/femme is "worn out" is that i just don't see it? i never see butch women in manga, or any other type of show. lesbians are always feminine in fiction usually to appeal to straight people. seeing a butch girl like sun jing in their story was really cool and meaningful to me. butch lesbians are only represented usually as jokes. butch women don't have to ~look like women~ to please you. and a "man with a vagina" is called a trans man and there's nothing wrong with being one.

on a lighter note, she's really hot this way and i'm glad she comes more into being herself in the future.

also on a lighter note, i feel really bad for the person who says they're not into haruka from sailor moon because ... come on. she's haruka tenoh.

^ You can apply pretty much all of that to Ymir from AoT too. So much "looks like a man, wtf".

I would take both of them but they wouldn't take me.

As an androgynous lesbian these comments can be pretty hurtful. I tend to relate to the tomboy characters and for that reason it's possibly my favourite tag, although I can agree that sometimes the characters are unrealistically masc. I'd like more short tomboys and taller femmes so I don't feel so... Tiny.

wow, tanjiu's art really has improved a lot! I like how she draws sun jing now. Also, some of the comments here are really terrible. I hear a lot about butch lesbians in media being cliche but yuri manga specially is filled with femme looking characters so... i dont know what this people have been reading. If you wouldn't say feminine characters are cliche (because thats stupid), the same should be true for more androgynous ones.

Another andro lesbian here. Totally butch. 5'9" with muscles but I have a pretty face and people are drawn to my cool charismatic nature. You'll never find me apologizing for being mistaken for a man from up close or behind, even when I wear makeup I just look like a prettier andro person. I want more tomboys like this one. It's totally realistic. She's not even that masculine to be honest. You guys should try to experience some media aimed at real lesbians before you go around condemning lesbian/yuri media for not being heteronormative enough lol.