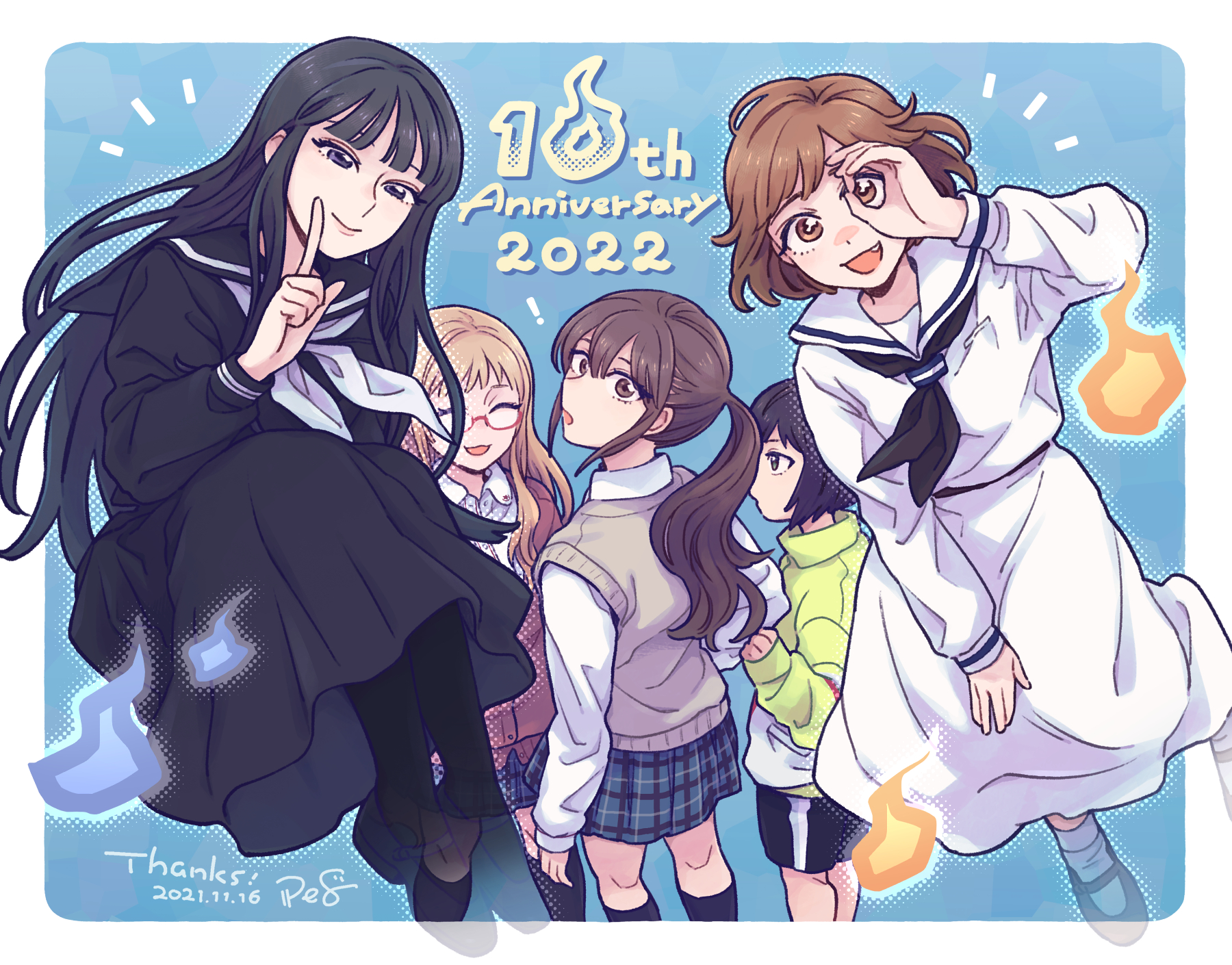 Is this worth playing? I have it but haven’t really gotten into it. If it’s just sort of vanilla semi-platonic pure romance yuri, I don’t really have the time for that.

It's nice to see fanart of this VN after playing through it recently. I wish there was an easier way to reset all the scenes you've unlocked and start the game from scratch for a fresh playthrough.

As for your question, yes, it's worth playing. There's a good variety of couples in the VN(although one is a teacher-student romance if you're not into that) making it a nice slice of life style VN.

^^You couldn't be more off about that expectation. Though I find the implication that pure romance is somehow not worth someone's time saddening, it is an eroge with sex scenes. If you have bought it on Steam you will have to install the adult patch first to see those scenes though.
The plot follows many different yuri couples with different kinds of appeals and it does get quite lengthy. One of the only real criticisms I could bring up is related to that... you cannot exactly pick which couples you want to follow at your own pace. Everything else is nitpicky or spoilerish.

@Licentious Lantern What version did you get? I distinctly recall it coming to Steam completely uncensored (there are even articles online talking about it).

Everyone is so vibrant...

@RandomGuy
Steam established a policy for pornographic Visual Novels to have an All Ages version and a free adult patch. It's mostly legal stuff related to some countries. Considering how old this VN is, it may well have come out before that was established, but when you go to the store right now it should be separate as DLC called "Full Chorus" (which includes a bunch of extra content too, like drama CDs and voice acting). I personally played the adult version right from the start, so I can't even say how they managed to replace a certain plot vital sex scene.

@Linterdiction: it is actual romance, no friend-zoned, and kinda eroge game. If you want some epic plot then it's not for you. But if you want pure-hearted romance that ends in cute + hot smexy scenes then it's for you.

It's definitely not semi-platonic, but calling it an eroge seems like an exaggeration. The sex scenes are very much not the main focus, compared to the romance.

But this ain't "meaningful looks" or "even though it's another girl" yuri. They's gay.

good game, however, for me personally, the H scenes weren't my cup of tea. like, I've played H games before and enjoyed them but something about Kindred spirits didn't sit right with me. i think its because a lot of the game is very much about innocent love save for one already established couple and then all of a sudden they are fucking. lost emersion points for me there. but its an h game what did I expect lol still enjoyed

@Licentious Lantern: I just want to say that not all visual novels are eroges though like Clannad which from what I remember has no sex scenes whatsoever.

Concerning this image I really need to find the time to finish the game. I started it a while ago but I keep getting distracted with other games.

@Sakura Cartelet
Pardon, but I don't understand why you are telling me this. I specified "pornographic" Visual Novels for a reason and I call Kindred Spirits in particular an eroge because it has a lot of sex scenes, basically one for each pair at least.

@Licentious Lantern
Pretty sure there's never been a separate censored version for this one, though. The Full Chorus DLC adds full voice acting and additional scenes, but has nothing to do with any additional censoring of the original VN; it was a later addition for the original Japanese version as well. The H scenes here are tame enough not to have been censored in any release.

^Astounding. Games with sexual content (real sex scenes) are blocked in many countries, but only Full Chorus is inaccessible to those, which made me assume it is the version with sexual content on Steam at least. I originally got it from another site of course, but the trend of releasing All Ages versions and an adult patch is definitely present in every 18+ VN I played on Steam.

according to wikipedia Kindred spirits on the roof was potentially the first game on steam to have uncensored sex-scenes, as it was released to steam entirely as it was before just with an added translation to other languages.

@ Licentious Lantern no it isn’t, however in this particular game, there is no mention of sex from the majority of the couples until the r rated scenes are about to happen. Save for One couple that is already in an established sexual relationship and of course the two ghosts who have to get it on to pass on to the after life lol. It’s really a matter of opinion after all. Not that I didn’t enjoy those scenes just felt less immersed

Kindred Spirits was among the first batch of 'adult' games that were released on Steam. It was honestly quite the big news back then. There were some discussions among the industry people about Steam's pants-on-head-stupid policy regarding putting slightly adult themed games on their platform. The talk back then was that despite KS being very, very light on those so called adult situations (Titanic probably showed more than Kindred Spirits); Steam was still giving the publisher a lot of go around for a dang long time despite the publisher directly asking Steam what they needed to do to get it approved. So any games that were perceived to be "those kind" of adult games are still given a rather hard time to be put on Steam. Yes, present tense. Some are just outright DENIED for ??? reasons. Still present tense. Some of the VN from that period had all ages version PERIOD with no adult patches available at all until much later. For example G-senjou no Maou/The Devil on G-String, which is not a yuri title, was censored on steam and came out in late 2015. The adult patch was not available anywhere until 2019 or 2020 according to a steam forum post. Said patch is only available on the publisher's website Denpasoft. Another VN example is Song of Saya, censored version on Steam. Adult patch can only be purchased from JAST.

If you are looking to purchase VN on Steam, based on pricing it's actually better if you just buy the uncensored version directly from the publisher's website if it's one of those titles with paid adult DLC. Although if you are just interested in trying out a VN to see if it's your cuppa, use Steam version to demo for -2 hours. Keep in mind that because of Steam's lack of transparent acceptance policy, potential yuri titles may also be outright rejected on steam despite being an all age title. I still don't understand why The Curse of Kudan is not on steam.

Excellent, I have now had it confirmed to me that the characters are actually gay. Very nice, I will be playing the game.

Remember when valve made video games?

On topic: yeah the game is gay af.

^By the time I discovered Valve, they definitely had already stopped making new games

Valve released a new game two years ago though.

uhm what have i been doing for the last TEN YEARS IT'S MY FIRST TIME KNOWING ABT THIS YURI GAME.... i am disappointed at myself im downloading this asap

^^that was an exceptionally well made tech-demo and/or index advertisement and you can't tell me otherwise.

edit: I can't keep track of all these silly VR headset names

Steam is simply anti-VN/Jps games. There's no censorship whatsoever for any sex or violence in western games, but if it's lighthearted visual novel about teens romancing? Nope, it can't have sex. Think of the children! At least it used to be, maybe it changed recently. I remember when I bought Highway Blossoms I was ultra pissed to later learn I bought censored version and I have to patch the game, because developers weren't even allowed to say the game has mature content that was censored on store main page and instead you need to go to community forum and find developer's post there. It gave me paranoia to buy anything from steam without checking if it is censored or not first and if there's a adult patch available.