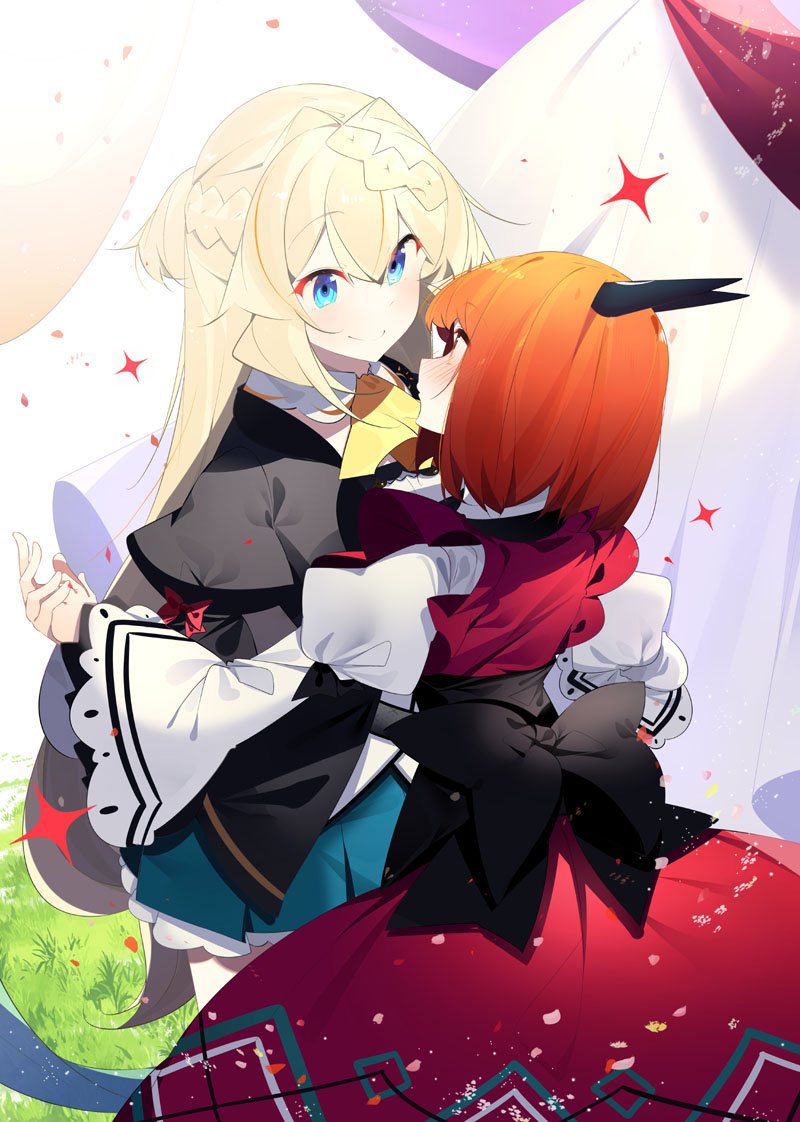 Her own dragon maid

Feels like Laika is a bit small here, idk might just be me. On another note, everyone be ready for the lewding of the daughters next, I can feel it in my bones and I am not prepared.

^Her size seems alright to me. Plus even if she is a bit small you can easily chalk it up to shape-shifting Dragon Magic, maybe she just wanted to be held comfortably by the loving embrace of her (bigger) witch wife. Quick and simple mental solution there haha

Also love that this is official art, and I'm really hoping for a bunch of Yuri fan-art for the series as well.

The author loves retweeting yuri art of these 2. Multiple levels of official.

^^ Laika is in canon fully capable of adjusting the size of her form, for example she once did so at the Devil Lord's castle, no need for mental solution, but I like your plausible reason for her to do so :)
With so much yuri tease in this series, yuri fanart would soon be flooding in.

(on that note, seriously though, why do series with such heavy yuri tease and never get anywhere nearly serious like this get the pass, while Hibike! Euphonium gets all the flaks for being "yuri bait" when KyoAni beautifully crafted such good yuri material de novo out of a weak het story? Is it because fans back then felt "betrayed" when they researched the source material and thus held the grudge? The prominence and persistence of such diss against H!E has always bugged me since. I don't see people having that much of a problem fantasizing canonically het characters in gay ships with other series :-??)

^I kinda figured it'd be canon tbh, DND and other fantasy settings often have dragons fully capable of shapeshifting into different creatures of varying sizes. They're one of the most powerful and magical creatures in fantasy after all.

Also as for your Hibike conversation, I think we shouldn't go too off topic here and a forum post would probably be the best place for a full length conversation about it. Though I think can give a quick simple take on the subject. Series like this have some gay subtext but people don't expect it to go further, plus typically the author leaves the options open to the viewer's imaginations. There's nothing to really get upset with here, official Yuri would be great but it is what it is. However from what I heard from numerous sources over the years with Hibike, is that people started to ship it after KyoAni made the anime REALLY overtly gay with the "subtext", and the author got upset by shippers and shoehorned hetero romances into the source material. Hetero romances the author supposedly didn't even want to include in the first place. I don't know if that's 100% true or just rumors/hearsay spread around, but if so I understand why people were and are fucking pissed, plus it makes the author sound petty as hell. I think you're comparing apples and oranges here with the two series, very different situations and tones with what happened. I don't want to get into it more than that here, but if you make a forum post let me know though.

Edit: I should also state that I don't claim to be an authority on the Hibike situation, I often direct people to ask others that know more. So I'm only stating what I've heard around the internet. At the very least I know there's a lot of anger around the series for various reasons.

Maybe Laika chooses a smaller frame so her master can fully embrace her.

^ My ability to keep my attention on any one thing has been deteriorating so bad, I couldn't hold it long enough to follow indepth conversations of a whole forum thread, so I just put it out when the thoughts crossed my mind when it's triggered by some sort of situational relevance, and take whatever quick words there to as new metadata for the next time the thought came around. So thank you for your reply. (Though personally I doubt that the het romance was shoehorned in in respond to shippers after the release of anime, since that het romance end was already there in the third book, which was released 4 days before the first episode of S1.)
Okay, this is really getting off topic of the pic. See you next time I get this thought into my focus again somewhere else. :P

^Haha fair, and yeah I honestly don't know exactly where all the anger and things I've heard came from, all I know is there's a storm around the series and a lot of rumors. Cheers though, see you around.

In one scene, the two main characters went to a mountain and one of the girls touched the others' lips and said: "this is a confession of love, after all." It was barely even subtext! It's no wonder people were pissed when the second season undid all of that. I'm still pissed about it.

It's one thing for subtext, but then to make it so obvious that they're into each other -how can that sentence be taken as platonic- but to then undo all of that?

Let's go get isekai and have a yuri family

[I apologise in advance to the mods and everyone who's not interested for being off topic here]
@Snapdragon beans and @Mai Kitty: Well, it's not often that I get to hear directly from someone with that opinion, so I hope you don't mind enlightening me about how did you develope such opinion?

What I don't get is why is it considered 'got undone'/'retconned' when KyoAni followed through with the obligation to adapt the important plot points (which was a little rare for them, admittedly) that was already in the books before S1 aired (in particular here, the debacle with Reina's crush on Taki which was used to display some sort of character developement of Reina, and the het romance with Shoe Itchy which was mostly shelved until it's really needed i.e. in Chikai no Finale), and exercised their artistic liberty where they could by putting more emphasis and details on certain things that were already there (the confessions of love between Kumiko and Reina are the most notable), and made up some smaller details that aren't in too stark conflict with the important plot points (e.g. last scene of S2 with Kumiko and Asuka)? Just what do people mean when people say 'it gets undone'? While relationship status is more constrained by social norms, isn't it totally feasible for one person to harbour feelings for multiple people at once? Polyamory and bisexuality are also real, aren't they? Kumiko and Reina didn't form a formal relationship, but they still stuck together and held each other to special place in their lives. And not everything needs to be stated explicitly, do they?

^I still really think a forum thread would be the best option for you, because more conversation about it will just derail the original art thread further. At this point the mods might even just delete all of the conversation about Hibike so far, because it's very off topic lol

Edit: I will also admit that I sometimes get super off topic with people on here, so I understand how it's easy to get sucked into a conversation. Back and fourth all that, heck I feel silly because it happened to me recently, probably a few times. I'd also be interested in more of this conversation myself, so that's part of why I think you should just make a thread.

Yeah, I don't want to derail this too much. i bet the mods will remove this because it doesn't relate to the above image at all.

I would die just for this to be canon