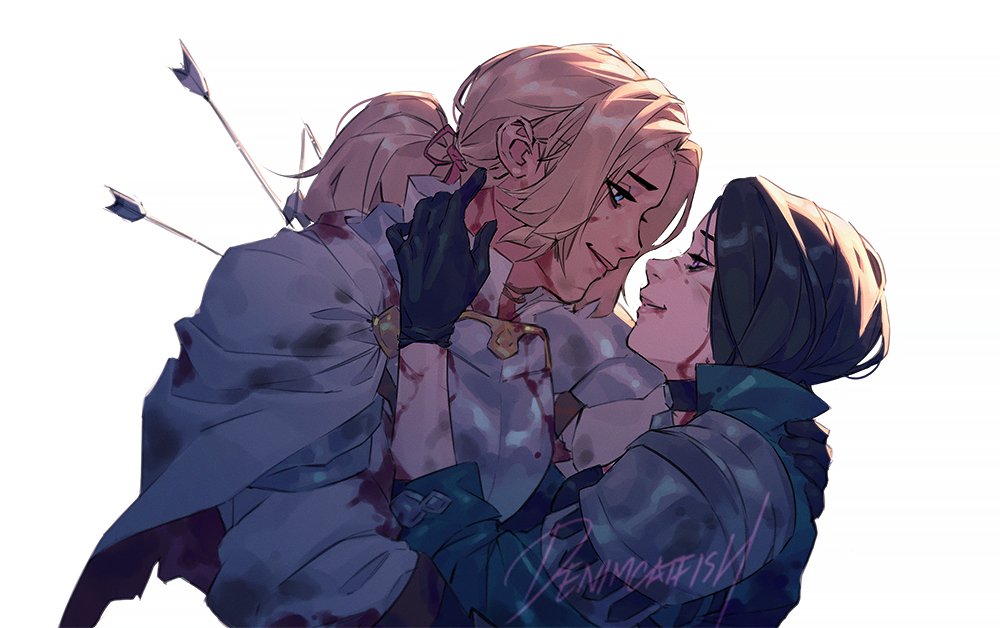 Did Catherine protect Shamir from those arrows? Or was Shamir the one who put them there in the first place? The world may never know.

'I'm still good and kiss me'

I feel Shamir would've had the courtesy to shoot her girlfriend in the front instead.

Think she protected her gf...

My Crimson Flower run. ;_; Can you hack the game get Catherine unstuck from Rhea?

such a nice picture

You can't hack the game, but I haven't had much trouble defeating Rhea in two rounds, before Catherine gets in range of my units (Hard Classic), so she doesn't have to die, although she'll probably never forgive Shamir for siding with Edelgard.

^ I mean, Edelgard does canonically create a democratic, prosperous welfare state in her ending, and presumably also exposes all the shady bullshit Rhea pulled to the public. I'm pretty sure Catherine would be amenable to Shamir's reasons after she had some time to cool down and see the results. That's the funny thing about FE3H- people criticize it for giving each house a happy ending in which they create perfect societies, because that's definitely not the way war works, but it serves as a great demonstration of how history gets penned by the winners.

^ Honestly, all four endings are how I'D change things if I were in charge of each faction. No more judgement, no one is inherently superior, crest or no crest. For the record, I don't think Crests are inherently evil. There is cause for people like Marianne to assume Crests are to cause for prejudice. But no, I think the problem is a lack of accountability. If people could reflect and realize that it's wrong to look down upon people without Crests or exploit people with crests, perhaps Edelgard wouldn't feel the need to destroy them. Speaking of, it's sad to know that if you're not with El, you must be against her, and either way, some good people will die. Crests are a magic weapon people aren't worthy to wield.