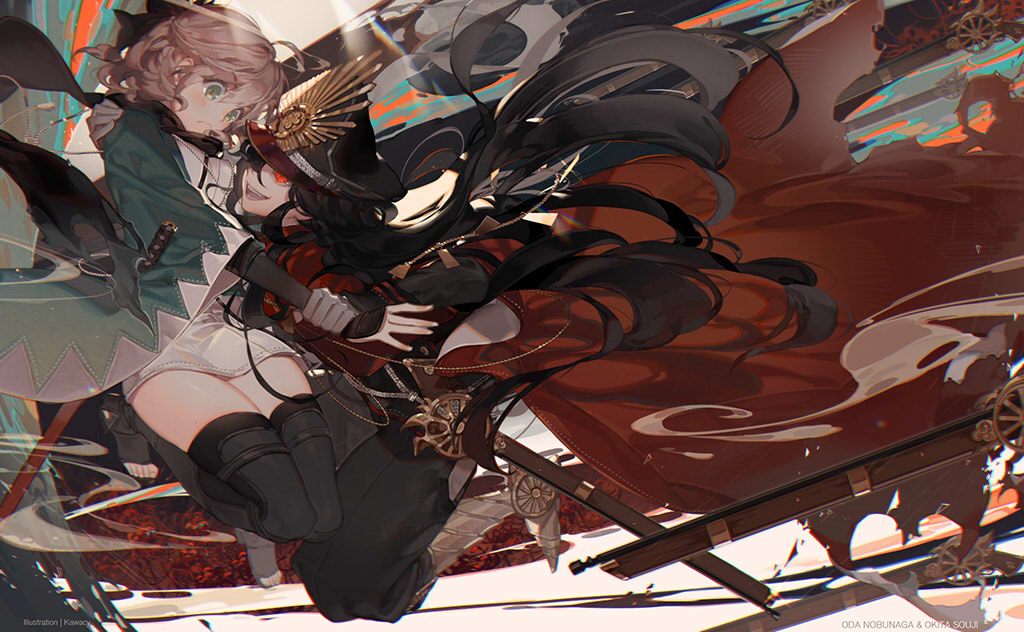 Ooooo~ all them details~ i love it and the color combinations~

I always enjoy seeing these two together.

think this may be mistagged, that's just regular okita

My all time favorite fate pairing

Can't wait for Fate/type Redline... Many fan arts from this two will come when it gets animated

^ are they pairing Okita with the guy or is she still into Nobu and the guy is platonic? If its the former than I can skip with an anime.

@thechampionmike95 Okita has 0 interest in her master thus far. The series is in general very serious, and lot of the Nobu and/or Okita action scenes look freaking great in my opinion. I wish the main master was female, but aside from that the series has been really enjoyable so far for me. An anime adaption is something I'd absolutely love, especially given how brutal and kick ass Nobu & Okita are.

I think "Azero25" was just saying that with an anime adaption of the series, you'd also likely get people making fan art with the male master. I think though that a lot of people (including myself) love the Okita & Nobu ship, so an anime would probably give at least a decent boost to the production of their ship fan-art (I'd hope anyhow).

Unless the anime goes shipping heavy. Its rare to see a Fate anime that doesn't try to ship the male lead with their servant or FMC

@thechampionmike95 You still get a lot of f/f ships from Fate anime. For example the arguably main canon relationship of Zero is Iri and Kiritsugu, but there's still more than enough cute interactions between Artoria and Iri that a ship between them works well. I personally love the fan-art of them together. Part of my point is that Okita & Nobu is already a fairly popular ship in the Fate fandom, a really hype and amazing adaption of Redline will only generate more of that because of the already established head canon in the fandom. Combined with any and all of their interactions in the anime fueling that fire.

Maybe you disagree with me, or just don't see where I'm coming from. That's fine, but as someone who is very involved in both the Fate fandom and fan-art communities in general, I am very confident in my belief that an anime adaption of this series would generate more fan-art of Okita & Nobu as a ship.

I hope yiu get to see an anime of this. I'm gonna remain a bit skeptical since Fate anime have leaned pretty heavy on hetero relationships but this is one of those few times I'll be glad to be proven wrong and we get Okita x Nobu in anime form. Hopefully we'll also get an anime of Gudako too. Or at least she's the Master in the LB stories.

@thechampionmike95 Well that's fair. I personally don't mind relationships of any sexuality in my entertainment, but I definitely would like to see more of Okita & Nobu as a canon ship. I think again though that Redline will largely focus mostly on the battles, and so far the manga has proven to be really excellent in that regard.

Also I fully agree that getting Gudako in anime form would be amazing. The Epic of Remnant Shimosa manga stars Gudako, and focuses on her battles & adventurers with Musashi. Which so far has been a really entertaining read, with some really nice art. So I'm very much hoping that the manga as it is with Gudako and the art style get adapted into an anime.

I'm shifting part of the edit on my last comment to this one since I think it makes more sense here. As I said though we might not fully agree on everything and that's of course fine, no hard feelings here. Plus regardless I have enough hype for at least 10 people for Redline, and the possibility of an anime adaption at some point haha. Anyhow though it was fun talking to you, have a great evening/night/morning, and stay safe during these crazy times!

I don't think we really disagree really. I have no problem with an anime of that series. The only thing I hope doesn't happen is them trying to pair Okita with her Master. Other than that I'm fine.

The Shimosa manga is my favorite FGO manga so far. The art style and characters are just amazing. Gudako and Musashi make a great duo and was a big part of why I rolled for her.

Don't forget Salem. We have Gudako as protagonist in Pseudo Singularity 4, Salem, my favourite-