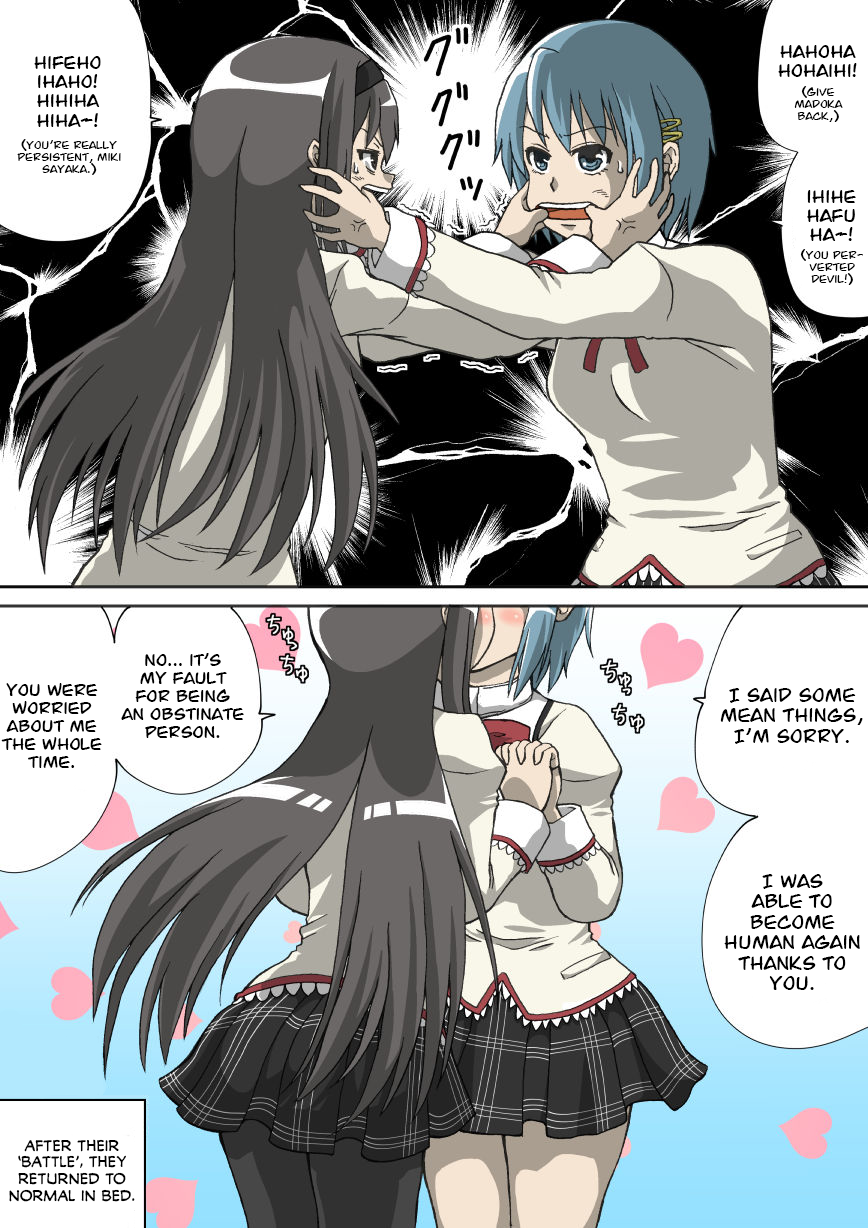 Going by the source, it seems like it was actually Madoka who got them to "make up" like this.

Marital spat at its finest.

^ Lol, I agree. Not gonna lie, this image did make me laugh a lil tho.

Part of the thing with Homura is that every single pairing with her that isn't with Madoka feels crackey as f to me, it's sort if the thing when you make her entire character motivation entirely revolve around how much she loves this one person and will go through absolutely any lengths for her.

I've heard at one point in Magia Record Homura mistakes Rika for Madoka and hugs her (making Ren jealous). Also in Magia Record she forms a friendship with a minor member of the Wings of Magius- Kuro.

^ The first one doesn't happen in MagiReco proper, it happens in MagiReco's gag manga series Magia Report(MagiRepo), what happens is that Homura tried to go full Coolmura mode but forgot to fix her eyesight with magic, which means she only saw a blur that roughly matched Madoka's color scheme, and she realized her mistake when she got close, the same strip also shows that this was Rika telling a very visibly jealous Ren what happened.

The later is correct, it happens in the first Valentine's event and the two meet while Homura was looking for a specific store to buy ingredients to make her chocolate gift to Madoka, unfortunately, Kuro was a victim of bullying at school, and it got so bad that she snapped and used her powers to murder her bullies, when she calmed down and realized what she had done, it caused her to Witch out, she was actually able to call Homura and meet with her before turning into a Witch(she Witches out in front of Homura), and when Homura finds her she notes she is covered in blood, which Kuro responds it is not her own blood, that part of the event closes up with Homura having been very heavily impacted by this(do remember that this is Homura much earlier in the loops than she was in the original series), and Madoka comforting her, as harsh a sequence it is, it has a mildly positive context of Homura's facade breaking just long enough for Madoka to start to understand her a little better, and drive them closer as a result.

I apologize for the long-ish wall of text, I just wanted to give full context to both situations, both of them have a very strong sense of Homura's romantic feelings being targeted purely at Madoka, the later of which might be the key point to drive them getting together in this timeline, which might have already happened off-screen, a CG from part 2 of the story shows Madoka and Homura holding hands, as well as standing a fair bit away from the rest of their quintent.