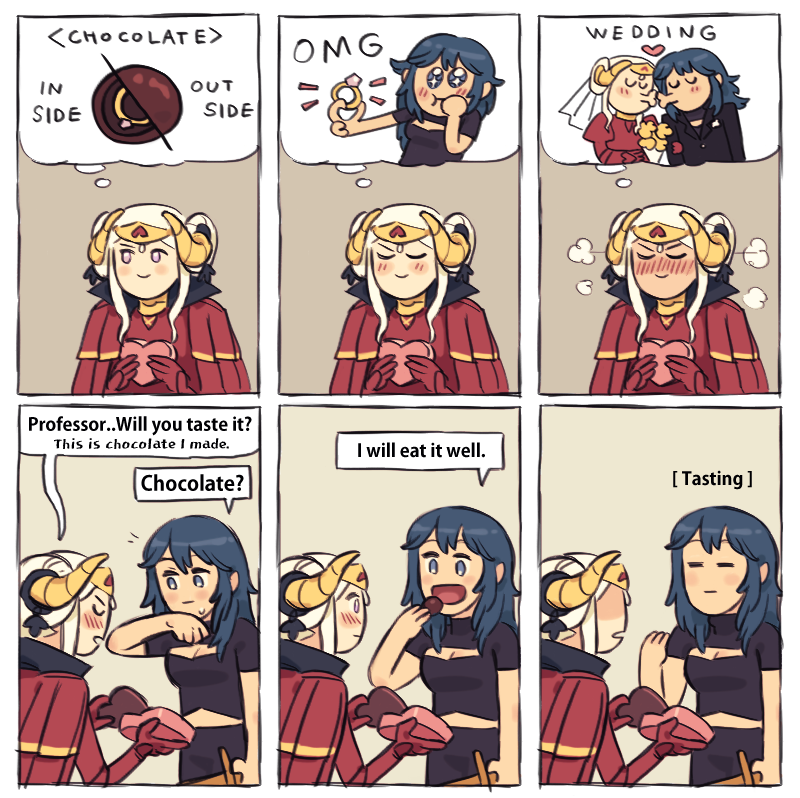 This is why Kinder Eggs were banned in the US.

Byleth has all the grace of a water buffalo. This was a terrible plan.

expectations vs reality
it doesn't always go the way you hope

don't worry Edelgard, she'll find it in a couple hours

@BlueDsc do you remember the chocolate balls that had small hard candy in them. I like those but I can see why they were a choking hazard

^I doubt they are banned any more- I think they are now world wide different- they don't have the present in the egg- its like in the box with the egg right?

No, the present is inside the Kinder egg. That's the whole point.

I honestly don't know how she expected this to go any differently.

^^ I've certainly seen some in boxes these days too. I guess the eggs still exist.

And as For these panels- I've always thought the idea of putting the ring in food or drink was really dumb.. even if it's found it could be damaged- and at best is covered in food and needs a good clean before it can be put on.. How is that romantic lol.

Okay, seems like I need to break it down: a kinder egg is a hollow chocolate shell wrapped in foil. Inside the egg is a small, yellow, plastic capsule that contains a toy.
The eggs are sold one by one, but you can get them in boxes of three. But even then, there's still a toy inside each egg.
It's really not complicated.

Too bad Edelgard can't reverse time like Byleth can.

the kinder eggs we get here, isn't even an egg. you open the package and the chocolate is on one half, and the prize is on the other. here as in alaska USA, and they are separately sealed within the egg

so much for the wedding =_=

Okay, seems like I need to break it down: a kinder egg is a hollow chocolate shell wrapped in foil. Inside the egg is a small, yellow, plastic capsule that contains a toy.

The eggs are sold one by one, but you can get them in boxes of three. But even then, there's still a toy inside each egg.

It's really not complicated.

There are actually two versions: Kinder Surprise and Kinder Joy.

Surprise is the one you're thinking of. It's basically a hollow chocolate egg that contains a plastic capsule with a toy inside.

Kinder Surprises are banned in the US, as they are considered to be a chocking hazard for young children, while Kinder Joys are not. Unfortunately, both versions are often called Kinder Eggs, since they're egg shaped treats that prominently display the Kinder brand logo and come with a toy, so it's easy to confuse the two, especially if you're only familiar with one version.

Okay, the Kinder Surprise isn't banned in the US just because it's considered a choking hazard — it's actually a deeper problem than that. See, the 1938 law that established the FDA (to stop things like the incident in 1937 where a drug company killed a bunch of people because they didn't look up what they were mixing their medication with) has a bit that bars food companies from packaging non-food things inside food. (With exceptions for structural things like popsicle sticks.) So it's not a case of looking at a product and making up rules, it's applying pre-existing rules.

Laws can change, of course — but it turns out the reason they're still banned is that back in 1997 Nestle tried to launch "Nestle Magic", a Kinder Surprise knockoff, knowing it was illegal and launching a big advertising and lobbying campaign after putting it on shelves. Since the thing everybody hates most is a smartass, they lost big and were forced to take it off the market, thus poisoning the legal environment for Kinder.