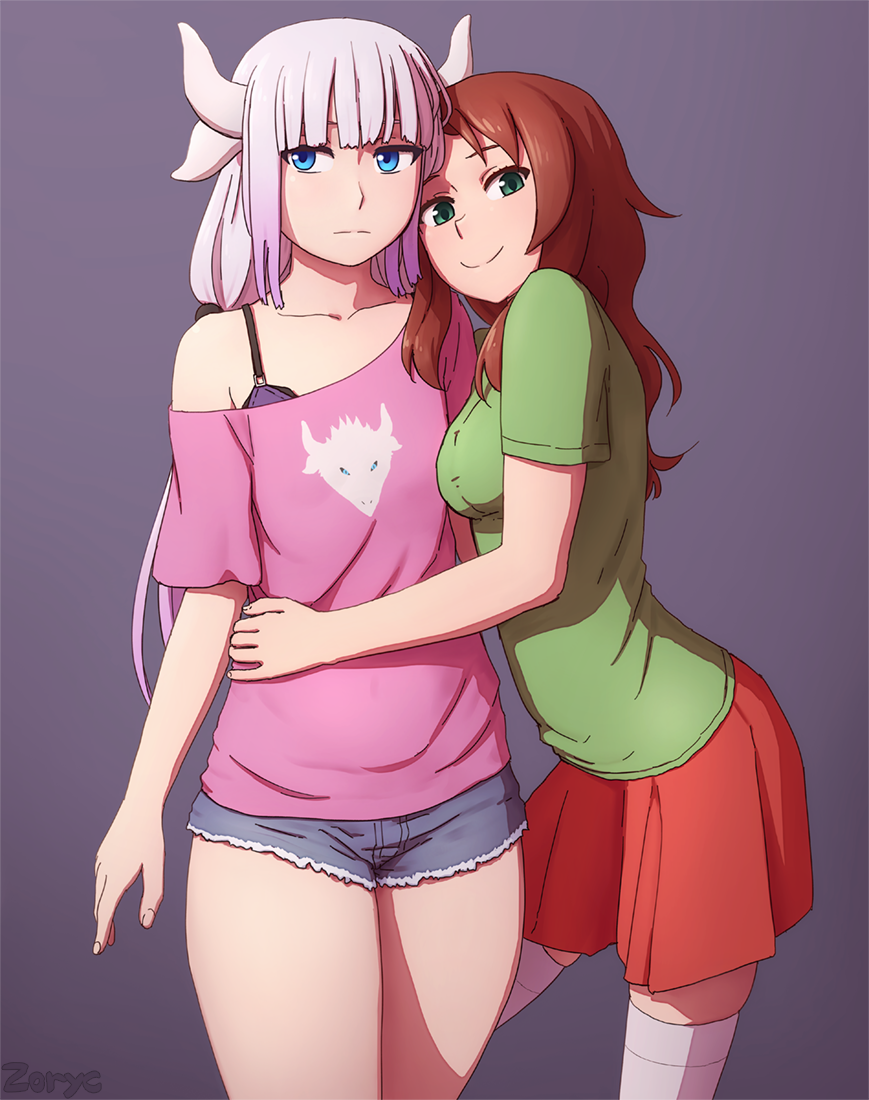 THIS! This is what we neeeeeeed!!

^^ It woulda been anyways - unless you mean the art not the characters themselves lol.

I always wondered how old Kana was in human years tho- she might be way older than she looks even tho she is a child in dragon terms. given how long the dragons live she'd be a child even if she was centuries old.

p.s I really like this interpretation of them both grown up some :) But its a bit odd how the dragon has regular eyes and the human has the slit eyes. In the show Kana has vertical slits in her pupils.

Ooooo. The older version of 'em. I like it.

This is a fun timeskip.
The next one won't be.

^I can imagine they use some magic from their home-world to take care of that- it certainly seemed to be a typical high fantasy world from the little we saw- so.. nothing to say magic spells /potions etc cant greatly extend a human life- and the super powerful and rich dragons would have no trouble getting access I'd think. I can certainly make it MY head cannon since the show never said it couldnt happen :)

^Tohru literally wanted to get an immortality potion for Kobayashi when she had a cold. They certainly do exist, even if extremely rare. Thing is, just like Kobayashi did, I bet Saikawa would refuse to take it. Immortality is a horrible fate that you shouldn't wish on your worst enemies.

^Maybe, maybe not. It was actually based on the spring of eternal youth, so I doubt you can decide how long it extends the life. Either way humans aren't made to live that long and it would just be sad for Saikawa. Kanna is a dragon, she will have to get used to outliving most things. Saikawa does not.

I wish I could live forever too

^^Firstly immortality potions etc very rarely mean that in the fullest and horrible sense - like say the hourai in touhou - never being able to die.. What it means usually is just they dont age. It would still be a simple matter to choose to end your life if you'd had enough after a couple thousand of years.

2nd, I don't know I buy the whole humans are not meant to live that long argument. yes we are not, physically. But if you solved that issue, Its possible we would handle living tens of thousands of years totally fine. After all we'd just end up forgetting most of the stuff we knew long ago- you just would not be THAT aware of all that time behind you- just like how whole years and decades in our pasts for us are compressed to just a few memories.
And while maybe we couldnt handle it- it's not like we have any idea- nobody has been In that situation to see.

Lastly, even if Saikawa took such a potion, she would not outlive Kanna so that wouldnt be a problem. The manga mentioned the dragons lives are so long they are basically immortal. Like they live billions of years. It would be far more likely one or the other would die of an accident or whatever eventually. But they would still have a lot longer together.

So basically any reason someone can think of why it wouldnt work or be bad can be countered with other reasons why it would be fine- so then it's just a case of which you'd rather believe.

^Oh great let's all live until we kill ourselves from the weardown of our minds...
Why do you assume it's fine just because both of them are immortal? Everyone else dies. What a horrible thing to outlive your family and all the generations after them. Also no relationship works out for eternity. Human minds grow bored without stimulation. It will not work out. I won't get into a discussion over why immortality is one of the worst fates imaginable for humans. Safe to say everyone has their own opinion on it, but most people who just say "I would love to be immortal" didn't think about it very much.

Oh my lord about time someone made them decent older xD

Kanna still had that poker face I see

^^^I personally like the idea that Tohru will at some point properly realize the difference between her and Kobayashi (she knows it, but I don't think she has quite realized it yet) at which point she realizes that she would rather become a human than outlive Kobayashi (although, I don't think that Kanna would do the same).

^I dont think she'd choose that- it would seem such a waste to such a long lived race to choose to live so much shorter.
Sure it would hurt to start with but she'd get over it and be left with the fond memories. All us humans manage to go through it without choosing to die when our loved ones do (most of us) - so im sure the dragons would do too.

She made it quite clear in the show the happier she is now the sadder she will be then, but that she just wants to appreciate the time they have. I think the only likely thing beyond the humans just living a normal life, is it being extended some with magic - but not hugely- like a couple hundred years or so.