The only endgame I can envision for this series is transformed Utena sitting on a throne, surrounded by naked magical girls on leashes all fawning over her and calling her "mistress."

Basically, I'm totally onboard to see her turn them all into her mind-broken love-slaves. Azul is clearly well on her way there.

i don't think Azul needs her mind broken to enjoy it.... 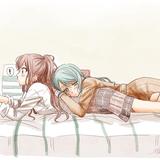 @SatsumaChan the smartass in me wants to add "and can get warmer depending on diet" >.> 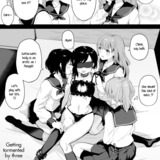 tits out for lewdness?

Mikan the reluctant top fanart when?

I just want to know one thing...so did the Auntie, best character imo, did something inappropriate to Sato, such as molesting or something or she was just...tainting her by example with her idea of "love" ??

There's been no indication or implication that she abused Satou physically. However, just growing up in that apartment would probably be traumatizing on its own. I don't know what it'd do to a child to have to witness their guardian regularly bring in "lovers" who beat her senseless.

Yeah, way too many people assume abuse is primarily or purely physical.

I think the implication with that reincarnation bit is that Shio has inherited the same brokenness that made Sato what she was: a psychopath for whom empathy and love almost impossible(hence rejecting her brother the second time) and, more tragically, like Sato, does not even register her own mental state as being abnormal. Being such a young age when this transpires, abnormal mental state(i.e. lacking in empathy) will be her normal.
I think that anything resembling a normal relationship will be beyond both her ability and desire, with the mirror implying that Sato is, was, and always will be, the only relationship that shall ever have meaning for her. With Sato now dead, the memories that Shio has are the only thing remaining of Sato, and the only thing Shio will ever deem precious and are completely part of her.

i honestly don't pick that up at all. Just because one is related by blood doesn't make it a healthy or loving connection. Asahi was broken by his experiences with his dad, and basically 'worshiped' an ideal life of him, his sister, and his mother, his sister attaining a similar purity to Taiyou's ideal of her. This is a big reason she says she is dirty to Taiyou; she's rejecting that role. So of course she rejects her brother. That's also why she sees a younger version of him clinging to the real him; he's basically slowly became another variant of their father.

While Sato did bad things, she really didn't do any of them in front of Shio. Even when Sato admitted to doing bad things, she still worked at protecting Shio. And Shio got a form of love and affection that Sato never learned. i see it as Shio taking the best parts of her relationship with Sato, and learning to live for herself, not to be an idol, or represent purity, or as a burden to others.

Swear ta gods, feels like i'm the only one seeing this from a survivor mindset, having been in similar situations (though not to the extremes of this manga).

I'm glad the series is over.

Not sure how I feel about it but I'm glad that it's over at least.

Eh, i think how it affects you depends on how you were raised yourself. i've only just realized the well of repressed anger i have from childhood PTSD from my dad being abusive growing up (just for context, one of those 'education' types towards me where grades and intelligence were the only values; he was MUCH more lenient to my younger sister). So i can understand Shio's side and response and how she develops into teenage-dom. Copying the only one who 'loved' her (since love is such a big theme in this series). As i said in another post, Sato was the only really 'unconditional' love Shio experienced.

Wouldn't call it bleak; more like....cynical yet still hopeful? Like, Shio cut off all the ones who were love with harm. She's living for herself and the one that's gone that loved her and sacrificed for her.

EDIT: Weirdly enough, this comes to an end here right when i've been confronting my father and confirming memories i didn't know where true or not as well within the last couple of weeks, so it's been....cathartic.

I think we got a Kannazuki No Miko ending here, but unlike KNM, Sato is reincarnated and she is the "little girl" now waiting for Shio whom is a teenager/adult by now. Well, better than the anime ending if we think this way!

It's not reincarnation. It's a complete life change. You get stories where the hero had a great love, and never dates or seeks love again after that great love dies; that's the case here. She speaks of Sato as separate, but part of her due to the happiness and life they had. Read back on the manga; Sato's pretty much the ONLY one who ever gave her 'unconditional' love. Dad was abusive, Mom had her own hangups from "shit rolls downhill", her brother required her to fulfill a certain role, to be the 'pure' one, same as Taiyou.

That's why the author had the flashback at the end; to reaffirm that idea. "It doesn't matter where. my love is my love, i only want you to welcome me home, and your love is your love. i love you, and that's what's important".

Yes, it was a traumatic experience. But like any trauma, it affects you deeply. As a survivor of some shit myself, it still affects me over a decade after it happened. But a deep experience like that doesn't have to be inherently negative. While yeah, overall Sato was REALLY Yandere for Shio, notice that she never went yandere to Shio herself. Only anyone who threatened Shio or her connection to Shio.

but how did she survive tho?

Sato sacrificed herself. took all that kinetic energy and acted as a cushion for Shio.

oh dear, the Arctic Wolf pairing really speaks to me. 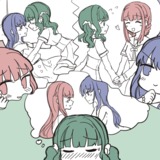 how in the hell do you suggest images to add? i've searched the site all over, Forums, etc, people mention a Discord but there's no help page, no dedicated links, NOTHING.

there's a manga-ish series someone is doing on HF called Black Label that i really suggest; halfway between Sunstone and manga. Collected version so far can be found also on e-hentai at https://e-hentai.org/g/1466246/60c98d95ec/

all punners will be cubbed to death.

jaymiechan
Those Who Try to Squeeze Their Way In Between Yuri discussion 29 Jul 23:06
Quote

AN EMISSARY FROM HELL

Funny you mention that - this Spider-Man did appear in the original Spider-Verse comic.

And also funny enough, JP Spiderman is why Super Sentai had robots eventually.

funny enough, i had literally just read this on another site. Always glad to see latex, lol.

By the way, who is White? I think the most correct tag would be the Commander?

White is the Commander's name. you learn that from Jackass.

How the hell did I manage to not notice this series until now? o_º

They came out here the same day Captain Marvel came out, which is also very much up a lot of this place's alley.