In a club, 2 girls have frequent rivalries about their types. Each chapter feature their rivalry on i.e big breast vs small breasts, nude vs small expose. There's 2 other girls in the club that are used as examples for their debate since their body are complete opposite of each other.

A girl have feelings for another girl but they're not close and don't know if the other girl have feelings for her. I think the setting was in a bar and the girl ask the other girl to shield her from her abusive ex(fake scenario that she planned in order to feel closer to the other girl) and just nice there was guy behind the girl so the scenario played out well. The shielding thing happened for a while until the other girl wanted to approach the guy to tell him off so that the girl didn't need to always hide from him but the girl hug her closer. That's all I rmb and honestly idk if it's from this site, is it a visual novel, was it a webtoon I have no idea. I hope this info helped. Its a one shot/doujin if it's the manga

I swear I thought this was a series first few pages in....

Never realised it till now but does having the polyamory tag a spoiler?

Yandere and love triangle tag.... I need more. Hope this doesn't get dropped

If this isn't Canon... SOMEONE PLS MAKE A DOUJIN OF IT

^ yes she was already revealed to be a mole in a previous chapter, she just finally made her move

also it was a total dick move, what a c u next tuesday

Eh which chapter? I can't rmb much of the contents of this story

Edit: I think it's the first 2 pgs of chapter 8

Lol so that's why she side with airi so often

Sayaka has a fabulous body

The comedy is misleading from chapter 4 onwards... I want another collection dedicated to dark stories like chapter 4 and 5

I thought fumina was gonna be the one acting innocent... Turns out it's Hikari wows

This is a pretty mild 'what the fk am I reading' doujin(or manga?). I love it

This is hilarious lol

The face wasn't even covered what face reveal HAHAHA 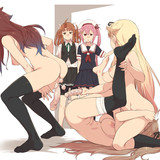 Anyone saw the small boxes comments at the bottom of the first few pages in each chapter?(starting from chapter 10 onwards I think) those small boxes have spoilers in them cos I've nvr read those part anywhere.... Why the hella are they on the chapters then zz

They're more like amusing (and something kinky) anecdotes that happen off-screen, ranging from topical humor to delicious adultery. Start with the extras page on ch10 (when we actually noticed the comedy gold within them) and then keep your eyes out for them on ch10 onwards.

Ohh so only some would be drawn out? Interesting idea tho I'd like the part where Ai got punched to be drawn out

Nonetheless I hope Ai finds another love. Ryou is definitely getting tgt with miu

Anyone saw the small boxes comments at the bottom of the first few pages in each chapter?(starting from chapter 10 onwards I think) those small boxes have spoilers in them cos I've nvr read those part anywhere.... Only till ~4-5 chapters later and I'll see the scenes that the small boxes had written. Why the hella are they on the chapters then zz

not really a "what's that manga called" but just wondering if there's any manga one shots out there that has this story before i tried to write/draw it myself. Basically Girl A helps Girl B make chocolates for Girl C, Girl B doesn't know Girl A likes her and once they succeed making it, Girl B goes off to give chocolates to Girl C and Girl A remains to eat the failures and cry.

^What's the sauce for this? I want to read it

To ans your question there is one that's similar https://dynasty-scans.com/chapters/snowflakes

Now I rmb why I unfavourite this. Love the angst but the fact that the long hair girl planned everything... I can't

Love it. Pretty innocent like. If only the pairings in each chapter were shown more