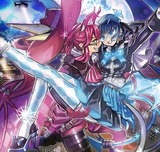 The fact that this is the only pure SFW SubaTea is very sad.
Will Teana ever reciprocate Subaru's feelings? lol they could make that a 4-koma spin-off.

SubaTea is indeed criminally under-represented. I guess there is way less canon material to work off of than NanoFate, though. Although they were arguably 'main characters' in Strikers, they're not portrayed that often in any of the stuff afterwards, and even more rarely interacting together.

It was totally weird to see a reference to 7th Dragon in this manga though, lol. It's one of the best RPGs that ever came out for the DS, which didn't make it out of Japan. I spent a good hundred hours or more with it a couple months ago thanks to a translation patch which came out this past April, and had a great time with a party named after Precure and Touhous.