woa... I thought i read this before, but only a first few pages.
That ending was unexpected, and not very conclusive either. I'm not sure how to feel about it. At least it's not a sad angsty ending, but I don't think I like it either. Arghhh Well, this one-shot just makes me want so much more. This could have been a nice read.
This is why I have a love/hate relationship with one-shots. Some are great stand-alone's but if the endings are too rushed or unresolved in this case then I am stuck. Mitsumi sure is cute. I love "cool" girls who are actually crybabies. Must be that thing called "gap moe".

This oneshot is like if Nanashi no Asterism didn't utterly suck.

Man, this was a nice ending. Open ended enough that it could be read as just friends or polyamory, depending on one's outlook and preferences, but with a strong sense of honesty and hope keeping things aloft. Personally, I like to think it'll eventually end in polyamory.

This oneshot is like if Nanashi no Asterism didn't utterly suck.

I'm reading through that right now, why does it suck? this is a "chain", with possibiltes get infinite, so it's certainly not polyamory of sense of word meaning I have to reread this one every now and then. Gives me the kind of ending I really wanted from Nanashi no Asterism 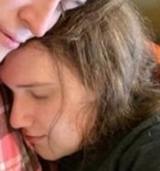 Wait what the fuck how did I miss this the first and second and third times I read this collection. This is amazing, this is perfect, this is 100% exactly up my alley. This is so fucking good. It's at least very polyamory-adjacent, even if it's not quite polyamory (and honestly the way they were acting I'm not sure that's staying up for too long). What the fuuuuuck. This is the manga I've been looking for. 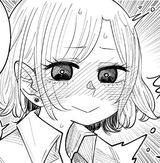 I've read it again and just realized... So do all yuri manga with "Asterism" in the title end up with this kind of development? >.>

I really liked Choko's hair. I'm not usually a fan of the long-wavy hairstyle, but Choko's hair was just so beautifully drawn here... It looked so silky and glossy and flowy and soft...
Just. Nice.

Don't forget final blushing and hugging! There are kisses. With Choko's lips it's obvious Mitsumi was kissed and with Hana's face it's implied Mitsumi was between two kisses!! Choko and Mitsumi established mutual affection. Mitsumi is visibly polyamorous. One poly vertex makes this now a polyamorous triangle.

Where things go from here is open to interpretation of the last two pages. Does Choko's "It's okay with us" mean just Hana's plan or the results of being free with your feelings in general, where Choko's feelings apparently grew poly? My interpretation of the gag in the last panel: Hana and Choko seem to be in a kind of competition for Mitsumi because Choko seemed slightly jealous, Hana seemed oblivious, and Mitsumi was stuck between them with a sweatdrop like a sighing harem protagonist. This could have made a good short series.

No one is pressuring Mitsumi and Hana to become polyamorous but with Choko established poly and the happy tone of the ending, a proper triad could happen. Realistically Hana risks becoming the third-wheel of the newly-mutual Choko-Mitsumi pairing. A girl who loves you stole your girl, damn. Losing a girl you love because you also love her girl, damn. A mutual love won't be lost as easily.

man I wish I had two girlfriends again