I reread it also..this is more worthy of anime adaptation than Tsubakuma imho.. :P

Took me aaages to complete (read in between other mangas as a pick me up) but it had to be done. Loved every second of it, funny, light hearted but with good ecchi jokes and holly witch there was even character development up in there!? Ticked all the boxes (even some I don't tick!) How does this get overlooked to be animated yet something as new as nitenshi miorita get an anime?! Tribute should be paid to some earlier released Yuri loli mangas (PS massive influx of that specific genre being released or approved for an anime this year? Dafuq happened)

I reread it also..this is more worthy of anime adaptation than Tsubakuma imho.. :P

I also re-read it and wanted to say that it should be made into anime. What the heck :D 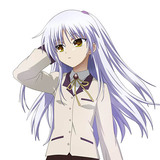 This manga should be animated. It's too great.

Rereading again now for the 3rd time in 5-ish years and it still holds up. Even though i remember some punchlines, the delivery is so good.

There will probably never be an anime of this, no matter how much it deserves one, but I thought I'd give it a bump on the forums for the new people. This is still so funny, even years after first reading it.

Damn it, Throbelisk, I'm trying to reduce the size of my "To Read" list, not expand it.

More than an anime, I want an extra chapter in which Sheska and Mikan get formally together.