^Yeah im sure it is. ShizuKasu is too powerful of a ship, it always gets me. ^Yup its very nicely put together.

Im fairly sure its not a lovers suicide.. since it looks to be in a bath.. that wouldnt be a great choice to try and drown together.

It might possibly be calling on that kinda imagery though (& Ophelia maybe) to evoke a tone,
like 'I will be with you to the end no matter what' but without actually going there..

The flowers look to be daisies? which means 'faith' in japanese flower language- that may or may not have meaning. Could equally just be picked at random to look nice. 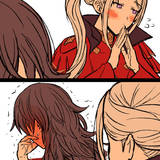 ^ which kind of closet?

This amazing shit is like an opening to a anime song I personally find it kinda sad, because Bun is a wonderfully complex character and one of the few 2hus who could be in a loving relationship without glaring issues of insanity, hunger, duty, species issues, immortality or yokai-logic getting in the way.

You 'bout to get tentacled, yo! Is This The Good or the Bad Ending.
:thonking: ^Well, I should say she is fairly rare in ero YURI works compared to what I'd expect. Having a quick look, there seems to be about 4-5 nsfw Reisen doujins on this site- between ALL the characters you can pair her up with.. It's a pretty small % of the total she is in on the site. I get cracked ships but why fumi x yachiyo. They don't know each other really and yachiyo has show ever sign that she likes shiori. And Akira belongs to mhichiru

I guess Sakuya is motivating her lol? yabai. The lion's tasting her prey.