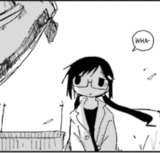 given that there's implied to have been a miss A, and B, and C... Yeah they might just be getting named according to each sequential letter of the alphabet.

Realllllly liked this one? I adore characters like N- difficult, crusty, testy, temperamental, catlike people who can never quite settle down, but are also, in their uncompromising, wary rejection of sentiment, perhaps more romantic than people like the Player herself. She measures sugar by the grain, by the scrape and grating of sweetness upon a tongue, by solidity in small things, unformed things, fleeting things far wider and frailer than language, than words, turning upon the infinitesimal shift of a mood, a simple look or word or feeling that might ruin the softest moment because its not perfect, though her trouble is that she's never found perfection, a flawless flavor, and must reluctantly admit that perhaps an aspect of dishes is who you dine with, and there's never a dull dinner with the Player.

If N is moody, if she's difficult, if she's unpredictable, then bliss for her must surely arrive as suddenly as annoyance, a shiver of kindness or gentleness, of affection provoked by the slightest things, that lets her love as suddenly as she hates, not trying, as she so cynically puts it, to 'twist' things, but simply to follow through on the trueness of her moods, the sparks of her heart, which seem knotted and labyrinthine only if one attempts to look for a set pattern, to trace her feelings from A to B without addressing them in and of themselves, produced by the flux of a moment- not the reductive, deferred, substitutive suggestion of the alphabet the Player organizes her loves by, but by a signification that looks to move beyond that narrow language, to articulate the tenor and texture of her own honesty, to rearrange and disperse and queer the grammar of love into poetry, into performance, into song, and so to fascinate endlessly the Player, to let her fall in love a hundred different ways.

N looks to seduce her lover not with sweetness, which cloys in excess and fades in paucity, but with the numerous flavors of her quiddity, of her life not as a dish, a combination concluded at the moment of its serving, a product packaged and foreclosed like the Baumkuchen that is bound in all its layers and depth to a circle of bonded sugars, but indeed to cook their time together, not with a view to its conclusion, to its consumption, created and destroyed for appetite, but to create from meals a mealtime, and from mealtime a time together, a space, a potential for creativity, for the seeing of herself as more than sugar or salt or bitterness or umami, but as all these things beyond the sums of their parts. She won't live by sugar, by empty lightness, by words whose weight she cannot feel, dishes that sweep away the contours of her tasting with a single strong flavor- N's palate is a bit more refined, but it's that refinement that lets her redeem sugar as well, to reincorporate and make it her own, to be sweet in her own catlike, difficult way, to make sweetness a part of her flavor rather than its sole consequence or purpose.

And then the Player, so drunk on honey, so soaked in saccharine, might taste and taste again, and come to savor each of her moods, look forward to mealtimes and snacks and changes, and come perhaps to polish her tastes precisely by tasting N in every way, until she moves from alphabet to name, from name to symbol, from symbol to mark, a point of expansion and not reduction, a taste unbound to nostalgia or time, but refreshed and complicated in every moment, mouthwatering and heart-nurturing, an acquired taste held close. The way to both their hearts is truly through their stomachs- for the Player, sustenance and appetite, food as productive and not consumptive, and for N, her gut feelings, all her adoration and unease and complexity distilled into moments with their own diverse flavors. 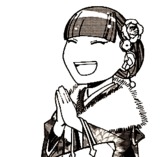 That's just plain wasteful.. don't you know there are staving children in.... most countries...

I thought this was a pretty average, sour kinda story but that bit with throwing up the cake made it up for me, instantly jumped to unironically hilarious

She can't communicate how she feels so she rather eat an entire cake and then vomit it out...just to be petty. Character designs were definitely cute, but this was a very strange read for me heh

given that there's implied to have been a miss A, and B, and C... Yeah they might just be getting named according to each sequential letter of the alphabet.

That's why I considered the sequential letters theory, but I still wonder if it's a coincidence that Keiko is Miss K.

It reminds me of a one-shot by Rumiko Takahashi called "Multiplying Wives." A man named Morishita gets a tail in the mail from Keiko Matsuzaka, which eventually turns into a woman named Aiko- or "I-ko." Morishita marries Aiko, who loses her tail, and eventually, they attend a class reunion hosted by Morishita's classmate Matsuzaka. All the men at the reunion have identical-looking wives. It's implied that Aiko was born from Keiko's tail, and one can assume that each woman's first name is the phonetic spelling of an English letter followed by "-ko."

Sad that she wasted a perfectly good cake :( 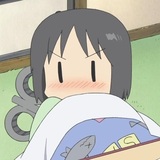 just the right amount of bitter

Solution to basicly every story ever

Now I want some Baumkuchen

Baumkuchen and not Tendou Maya related, I feel cheated. The throwing up part is hilariously gross and on-point.

This is like so weird yet I love it

The cake is awry

Interesting story, would like to see more from this author. Art kinda reminds me of Sakamoto Mano.

That's the most accurately lesbian manga I've read on Dynasty I guess. Could have threw up that cake myself.

(also I should read more of Temp comments. )