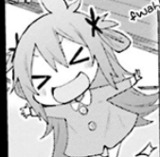 Hi I'm proposing a new tag called 'Symbolism'.
There are a handful of manga I've read on this site where the symbolism can be extremely meaningful, and only obvious on a second read-through. If the tag were to exist upfront, I would be more attentive to some of the details that might go unnoticed and may even enjoy the manga to a greater extent. I would really like to hear some opinions on this and whether or not it would be too subjective and/or apply to too many manga.

I can't think of any examples on the spot other than the recent Yoru to Umi manga where the symbolism is basically front-and-center. It hasn't completely played out yet in this case the character Tsukiko Yano constantly views her classmate Aya Utsumi as a human fish, but in chapter 18 you get to see her childhood self clinging to a fake stuffed fish which may indicative of a comforting feeling when watching fish swim.