I wish she had been a loli since the start.

I mean, as nice as that would have been, it would have made infiltrating the school much harder.

No, your original form

Volume 3 comes out in 2 weeks
Oh yeah, Christmas is coming early this year.

Is it just me or does Shiori (in her "normal" form) totally look like Touko from YagaKimi?

"Vol 3 comes out in two weeks"

Can someone please explain to me the symbolism with the name "Miko" & the beads she wears? It was being discussed a few pages ago.

Also, I didn't notice the scars on the MC until I read about it here, lol. Any other interesting details you think others may not easily find?

Is it just me or does Shiori (in her "normal" form) totally look like Touko from YagaKimi?

Why is "long black haired girl" so popular in yuri? It feels like a cliché by this point, I wonder which series started it? Or popularized it? (not complaining though, I really like them, especially when it's a serious/cunning character!).

all forms are cute,but i personally like the original more XD

i wish my girlfriend can transform to.

Can someone please explain to me the symbolism with the name "Miko" & the beads she wears? It was being discussed a few pages ago.

Aren't "before" and "after" switched up on the table and chair page? Why "finally" a floor chair if the author had that "before?"

feel like this story has potential but i hope she doesnt die.. i mean yeah it seems dark af but im hoping that she turns into a mermaid or develops a relationship with this monster girl . Also i have a feeling some of her friends or at least 1 of them might be a monster girl? seeing how its to do with monsters it would be cool to see another monster battle

Just caught up on this manga and started catching up on all the discussion, but this comment turned out to be so prescient that I finally created an account just to point that out, lol.

As far as discussing the actual story, personally I'm hoping that Hinako sees that Miko has been trying to help her just as much as Shiori has, and I don't think it's unreasonable to believe that her motives are (mostly) unselfish. There are plenty of benevolent spirits or creatures in various folklores, so I don't think it's a stretch to think that she's protecting Hinako just for the sake of helping her heal from her trauma.

That said, she's definitely got that yandere energy, lol.

Also, Shiori's got a lotta nerve calling Miko a monster when she herself has basically said, "Once you find happiness and a will to live, then I'm gonna kill you."

Also, Shiori's got a lotta nerve calling Miko a monster when she herself has basically said, "Once you find happiness and a will to live, then I'm gonna kill you."

Well, Shiori's never claimed not to be a monster herself, quite the opposite.

Hype for the new volume release! This is an incredibly interesting premise so far. Hoping for poly ending...

Also interested to learn what it is that makes her so attractive/tasty to monsters in the first place, if her depression "smells" like gross rotting to them.

Hold up, all this extra does is make me like Miko more. I really don't want to think that she's the enemy Shiori makes her out to be.

Ah sorry I was thinking of Miko, though it is also possible for the MC to die as well. I just want them all to be happy x_x

Same here! Fingers crossed for this to (somehow) be resolved peacefully and for them both to become her GFs

one goes boom, the other goes crack
one has got a temper and the other is wack
blondy trusts one who says she's fodder
would be wierd if she distrusts the other

This is gold XD

Man, I love how this story plays around with 'monster-romance' conventions. The whole Inhuman character goes 'I can change myself into whatever form you'd like', only for the protagonist to say 'I like your original form the best' is a staple scenario, but this variant is rendered hilarious by the fact that Shiori's actual natural form probably looks something out of R'lyeh, and her 'original' form in this context is just a conventionally attractive shape a predator takes to lure in their prey. Accordingly, Hinako's 'I prefer your original self' response is provoked more by a disgust of the transformation process than actual attraction to Shiori's usual form (though she definitely feels something special for her). They've essentially got a predator-prey relationship where the predator's utter lack of subtlety is balanced out by the prey's utter lack of self-preservative instinct, and so they loop around into a bizarre sort of companionship. Peak romance, can't wait for more.

Seconding all of this as well 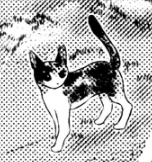 This is so good! I hope there is more soon.

But as with every other Yuri manga, the MC should always ditch the dark-haired girl and go with the childhood friend.

i wish my girlfriend can transform to.

Ditto! Transform into reality that is sobs 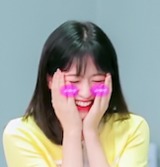 Thanks for the translation!

Also these cliff hangers are killing me, I honestly just want the fox girl to survive right now haha

NGL it kinda worked for me regardless :D

@FluffyCow Do you really think Shiori would just off Miko and plunge Hinako even deeper into despair and depression? It's gonna be hard enough dealing with the realization that her memories of her bestie are fake, don't need her mourning another "loved one" in addition to that.

@FluffyCow Do you really think Shiori would just off Miko and plunge Hinako even deeper into despair and depression? It's gonna be hard enough dealing with the realization that her memories of her bestie are fake, don't need her mourning another "loved one" in addition to that.

Fair point, but she is very competitive when it comes to her "food". Plus I have trust issues with authors since they'll sometimes take the most depressing route possible :P

Really love what they've done with Miko here. She's got this whole classic monster romance tortured-love dynamic going on with Hinako wherein she can't suppress an urge to feed on her, but also, in actively repressing that desire, is perhaps the most human of the cast, while Hinako, in her absence of anything resembling self-preservation, is both more human than instinct-driven beasts and unusual in that even humans often bow to that primal self-preservative desire when things get hairy, making her a subtler example of the human-inhuman paradox embodied by the other two rather than a mere 'pure' human. I also love how Miko, Hinako and Shiori are all united by the theme of a 'vow that clashes with your desire', wherein Hinako wants to join her parents in heaven (which might be an actual possibility, now that we know divine deities exist, which I hope homegirl realizes in the future), but can't opt for expedient death because of her promise to them; Miko's compelled to eat Hinako, but retains some scraps of a pride & responsibility as a guardian spirit as well as what seems to be a genuine adoration for Hinako; Shiori has none of these petty mortal moral compunctions and is majestically, regally inhuman, proud of her status as a creature far truer to herself than the rotting leftover and the lurking hypocrite, but is paradoxically vulnerable to the same vice that causes so many gods and demons to grow engulfed in complicated human affairs- her sense of taste is ironically perhaps the most rational, 'civilized' motivation that currently exists among the cast.

The main trio here is honestly among the strongest I've seen in any story I've read in recent memory, since they embody a lot of your standard triplicate idea divisions, such as the id-ego-superego or heaven-purgatory-hell, but never completely, always complex enough to have a nested contradiction that renders them more than archetypes. I could write essays on this, but one aspect in particular that fascinates me is how they're going to engage with the idea of divinity and guardian spirits, especially since they're confirmed to share some manner of biological link with the monsters. Are they different species? Are the monsters fallen angels who turned away from their purpose and became enemies of humanity? Are guardian spirits merely monsters who defected or were tamed? If a guardian spirit seems capable of degenerating into a beast, can a monster ascend to a higher status through noble deeds (this might end up being the endgame for Shiori, intentional or not, since mermaids are more often portrayed as sagacious, beautiful spirits than her Captain Cephalopod schtick, and her 'redeem Hinako's soul to the highest joys' plan seems like the kind of thing a guardian spirit would do if you removed the little subclaws at the end)? What happens if Hinako snacks on a monster? So many questions.

Also, Hinako being from a divinely-favoured family is probably one factor in her deliciousness to monsters (who I assume cropped up not recently, but were there all along and simply eradicated by pest control carried out by Miko, possibly when she was stronger or had help), and I love how Shiori and Miko's agendas regarding Hinako both clash with and support each other? Miko wants to keep Hinako alive and happy, but the process of living renders Hinako miserable, which might reduce her potential flavour by making her depressed and rotten, mitigating Miko's appetite, but also giving Shiori a massive window in which to prey on her, since her target's security is ensured at the cost of her flavour. And Shiori's whole convoluted 'be happy and love life so I can murder you at optimal flavour' is technically the best shot they have at making Hinako happy like Miko wants, since the prospect of a beautiful death seems to be her best motivator, but this also has the side-effect of both ensuring Hinako's death in the future (if Shiori isn't lying) and making her progressively more delicious, weakening Miko's already fraying restraint. Absolutely brilliant intersection of desires at work here, with each character being thwarted by precisely what they hold precious. It's like if No Exit was adapted into a lesbian romance catering to monsterfuckers, in which case I hope the endgame is polyamourous (polyamovorous)?

I wish she had been a loli since the start.

Really wish miko is good cuz I never really had interest or liked Shiori, I mean what is there to like?