Haha, would you call that an engagement knife? It's definitely a bit twisted, but "please die with me, but before that, let's live long and happy lives together" isn't the worst proposal I've ever heard. Incredibly glad this got a sequel.

More than that, she's putting the decision into Ayumi's hands. It's a pretty important gesture of trust, and making it clear she's an active partner in all this. For someone with her history and lack of self-confidence, that's a hell of a gift. 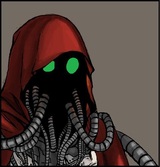 @Tyrswed
There are three chapters in total for this story, yes.

Oh my, that was sweet. That knife at the end tho. I hope the third chapter gets done too. 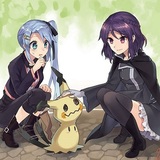 Nice! Good to see you 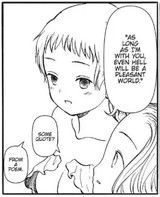 @Tyrswed
There are three chapters in total for this story, yes.

this story is one of my personal favorite.
I love Saki so much!
she's so much love, I like the way she don't give a shit about anything around her except Ayumi.
the way she's always smiling at Ayumi , I find it so~ adorable nd heartwarming ^^
aargh~~ my Yuri gene~

and you were saying there's one more of this awesomeness?!
get the hell outta here dude XD

Ties self to a tree
I'm going nowhere! D:

Thanks for happy end :)

This is really heartwarming, at first chapter i think its over with “?" ending. But its finally have squel.

The "lets die together" and the knife was not really "twisted" more like... jarring.
Feels so out of place even with the bullying.

"If you really love me, then die with me"

...uhhhh...better than getting rejected I guess...

Hmmmmm, I wonder how the 3rd chapter will end. Them as adults living together or tragedy.

Dude, i've been scarred by other manga! I totally didn't read the first part so I kept expecting a yandre/ntr twist at the end >.<
Lol, im interested in part 3 now ^_^
Thanks for scantalating! 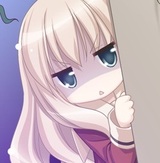 Those scars ... She was sexually abused?
Is that why she wears spats shorts too?

Those scars ... She was sexually abused?
Is that why she wears spats shorts too?

The suggestion seems to be that she was physically hurt by other kids in middle school, rather than sexual abuse. She does suggest that the bullying she got in high school was a lot less overtly violent. As to her parents, the most likely perpetrators of anything sexual, there's no suggestion that they're hostile, only neglectful.

The spats, I dunno. To guard against skirt-flipping embarrassment?

Man Saki is a total bad ass! I like her

These two remind me a lot of Mari and Akko... if Mari was being bullied and Akko was more of a bad ass I guess. Also these two had faster progression but it didn't feel rushed either.

Sweet story but I wish they didn't suggest a romeo & juliet suicide. I actually thought Ayumi was joking at first until they kept bringing it up. Ah well I hope the final chapter gets here soon.

Cute yet a bit disturbing. 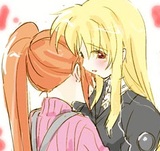 This has to be the best thing Mountain Pukuichi has ever written. This is even better then Nana Yuri, Definitely going into my favorites. Saki's devotion to protect Ayumi is so adorable to read, I highly look forward to the final chapter. 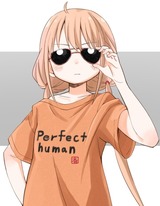 This is super good. Really adorable how the two mesh. Pure vanilla yuri is definitely great, but dramatic and romantic yuri also deserves the love. The thing about the knives and dying together may be twisted, but it makes this uniquely cute in its own way. I don't know, maybe I'm in the minority here, but honestly, more interesting characters and stories are never a bad thing, even in yuri.