What's great about this is that instead of asking Asumi directly, Nanao is just picking a girl and hoping for the best - exactly the same thing that led Asumi down her current path of iniquity.

Considering these days the girls she’s picking is so diverse, it’s like she’s trying to prolong this search so she can have a reason to keep going to the brothel, despite the fact her horniness is all the reason she needs. Asumi is pretty the journey and not destination kind of gal, unless the destination is climax of course

Yess Nanao, come over to the dark side. We have cookies and lesbian sexworkers <3

Also, for those who may not remember, Ena is this lil cutiepie we met all the way back in chapter 4. What a stroke of fate that the girl who had Asumi as her first, will now be the first for Nanao. So ena is the bottom, either this ends up like the meme they're both bottom or nanao has some sadistic side in her. im hoping for the latter. she's rich girl after all

If you reread the chapter you’ll find out that Ena’s a switch, who’s a very good top as well. But Nanao could use some practice in topping consider Asumi is a forever bottom Mei really likes the girls with the Death flags, first Kiana and then Elysia. This probably the point of time she realizes the true value of the people she cherishes to be a feeling of wanting to be close to them and not just have it on her mind that they’re safe. Kiana’s still waiting Mei, albeit on borrowed time 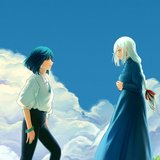 Howl’s Moving Castle, but Shenhe is carrying and moving the castle herself lol

Okay, things are going as predicted, but Ena making a return is a welcome surprise, maybe Nanao will remind Ena of Asumi there. I guess this holds up hope that so many of the girls we’ll see more than once like Sayaka.

Damn, Nanao is gonna fall prey to the same rabbit hole as Asumi. Going in with a goal, but just forgetting it all to Satisfaction. I love this manga lol

I would like someone in the future to take a large serrated knife to the Prez and vice prez’s guts, twist it around a bit, and give them a slow painful death, giving them enough strength to futilely argue their justification of their actions and moments before they die, I want the person who stabbed them to spit those same words back to the two as they die, making them realize their own justifications led to their own comeuppance and by their own logic making the same person killing them “justified” in their own eyes.

They clearly don’t realize that they’re no better than the people who’ve hurt them in the past, no they’re much worse because in the face of death, they chose to laugh and revel in the misery that is sure to follow. I don’t want justice at this point, I want to give these two exactly what they deserve and it’s their own “justice” being served against them. 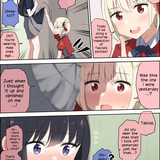 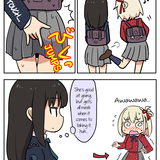 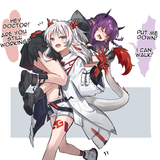 ^ you forgot about the divorced duo with a daughter to look after, still waiting on an event which we see Ifrit and Saria properly communicate and with Silence being cordial, especially after Saria’s involvement in Mansfield which should be enough reason to reach and speak to one another

First three chapters are up now on Bilibili Comics. For some reason they went with Vonny instead of Evie for Yvonne’s nickname.

Yeah, Evie was so much cuter, Vonny just sounds so weird

Man, tbh I was hoping Bilibili wasn’t going to translating this, but it only makes cause it’s one of the most popular gl comics they have. Their localization isn’t always the best, plus they’re pretty slow on the releases too

Nicoxmaki01
A Monster Wants to Eat Me discussion 03 Aug 01:20
Quote

I think what the nice lady is a widowed mother who lost her children from a similar accident, who’s been simply going through the motions of life, but internally scarred from her reality. And upon finding Hinako, she finds a kindred spirit in her tragedy. I don’t think she’s necessarily a monster like Miko and Shiori, but perhaps a human like monster who has been engulfed by her grief and become utterly inhuman. I’m not sure what kind of monster but something along the lines of perhaps a stalker or maybe murderer. Interested to see exactly what’s up with this lady.

Elsa’s getting ready to ride, just not a wyvern that is

I read the untranslated Manhua which as of right is at Chapter 27 and let me tell you I was not ready for how whipped Jing Xiu and Ji Youyan are for each other despite not being together, their small interactions are heartwarming. It really goes to show much Jing Xiu is holding back from letting herself fall back into their usual self when they were dating because of her fear from being heartbroken again

That “friend” in the prologue is a complete bitch, casually joking and encouraging sexual assault and when Kyouko rightfully gets angry, she brushes it off as an over reaction. Good riddance to her, hopefully the only other time we see her again is when she gets her comeuppance 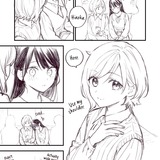 I never got the appeal of shoulder pillows, bc as someone who’s done them unless the person you’re using is much taller, at least the sitting height, it’s uncomfortable af

Imagine if one day Aizawa just full on flashes her with no underwear lol, she’d get a reaction for sure

Nicoxmaki01
A Scummy Gap Student With a Hard Life Calls Upon a Lady of the Night discussion 23 Jul 16:10
Quote

Lol the author finishing a manuscript right after giving birth

Oh man I can't really see how Makino will worm her way out of this one. Maybe lie it was a prank or something? Even if her parents let it slide this time, I feel they'll keep a closer eye on her now

Tbf, some women have a nonchalant and easy birth. I know a mother that gave birth that didn’t even go to the hospital immediately and waited until after her kid went to school even though her water broke around midnight, she even went back home after a day.

I really want the new girl to be some yandere like girl who wants Kaguhara to indulge in her fetishes but to her exclusively, but it also seems like it’s an introvert who might not approve but slowly be someone who indulges Kaguhara’s fetishes. Either way this either leads to more girls providing for Kaguhara or some funny shenanigans and I’m all for it lol

No, the other girl is fighting over Kaori, not Kaguhara. So she wouldn't be part of Kaguhara's harem. 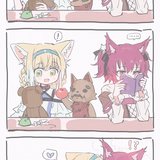 Well, looks like we now have someone not only able to see the system, but also manipulate it.

I'm worried. I'm crazy worried. They now have to deal with an actual person who's messing with them; this is way more worrisome that just having to beat a broken machine of a villainess system.

Eh, I mean, this was a very benevolent change, so I wouldn't be too worried, clearly she's here to help.

To what point and purpose, though? What if her help is toxic?

Ah yes, someone who gave Yvonne the only other option to avoid pushing Elsa off the stairs and saving her from similar previous self harming turmoil, is definitely going to be toxic for them, yup definitely. Definitely won’t be a positive thing for Yvonne to know in the future that it’s possible to fight and tamper with the system that could lead to her being freed from it entirely.

Seriously speaking, even if like other time shenanigans plot where the time traveling helper creates new issues trying to fix the current issues, the fact someone strong and knowledgeable enough exists or will exist can ease some of Yvonne’s current dilemmas and even encourage the current Elsa to step up more for Yvonne’s sake with some push.