Melissa will break soon, cuz I broke immediately into a smile seeing that cute lil newbie witch, it's tough to put up a fight in front of such pure adorable witch trying her hardest. ^Cause she had it dyed early on, but then decided to let it fade.

That smile tho; thanks to whoever uploaded this, dynasty needs more Adashima pics. I was kidding. It is what it is tho.

^You should join us in yellin SayoTsugu, ya know ya wanna, it's fun.

Wow, you guys don't like people yelling SayoTsugu? I kinda feel sad now. I don't usually do it but it feels nice seeing so much love for this ship expressed like that...

Don't mind them, they some vibe killers. Keep doing it, yell the ship with your whole chest and all the love you got for it

misxellaneous
Run Away With Me, Girl discussion 17 Aug 03:47
Quote

Bruhh seeing Komari all grown up and confident, still havin her passion for photography; beautiful. Not to mention we get to see the kid and glimpses of the past, tying them all together. Thank you for all your work on this series.

Wish we coulda seen Maki and Midori one last time tho.

Yessssss my aesthetically pleasing manga is back, gonna have to re-read, thanks for the translation.

Hmm so Kurokawa liked Fujishiro since the beginning, surprising since she was a total bitch-chan back then; so I can see why the otaku girls think it's weird that they're friends now, guess sometimes your "enemies" at times, turn out to later be your bestfriends, that's happen so many times to me lmao, funny when ya think bout it.

Also Kurokawa has always been very yandere-esque and here I thought it was jus a one time thing. Now about that boy, like a somebody said above, let him be gay.

Lmao I got that same vibe too cause the art is so similar to Moke's, but better. Adachi finally has a "mom".

misxellaneous
With Her Who Likes My Sister discussion 15 Aug 20:23
Quote

This is stupid funny and stupid cute, I already ship these useless lesbians

Well I was kinda right about it being like sloppy in the sense of sloppy toppy, but it turned out to be that and more lmao, this was pretty fun, but damn Kamijou is in trouble now. Hope this gets a sequel, I wanna see if she does decide to go down that sloppy relationship path. misxellaneous
If I Take a Peek discussion 13 Aug 02:32
Quote

Really a perfect song for this tbh

misxellaneous
5 Seconds Before Falling in Love with a Witch discussion 13 Aug 00:38
Quote

The straightforwardness in this from people who can't express themselves so easily, is so great, I love it. NOW I NEED MORE WITCH YURI LIKE THIS, preferably another from this artist, cause I forgot how much I like witches.

Incoming feelings of jealousy, I thought we'd see the friend rival next chapter, but nope. Oh boy I'm not ready, though at the same time I'm excited.
Also these two gosh I love them, Asahi ready to catch Hinako when she said I'm scared and her asking to hold her hand. It ain't selfish if she also wants the same thing. Thank you so much for the translation! 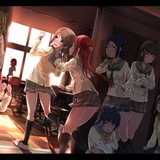 With a support group like that how can you not be motivated to confess!

Nothing will cheer you up more than some boob. Damn what a cliffhanger, def needs a sequel cause you just can't leave us and haru hanging like that.

misxellaneous
Even If It Was Just Once, I Regret It discussion 08 Aug 22:17
Quote

Pain. This chapter is pain, homegirl had to say sorry for accidentally confessing, ouch, but she's gonna keep trying! That's the spirt. On a side note Miss Landlady looks really pretty with her hair out of her face on page 10. I was already shipping it, but this just made me ship it even harder